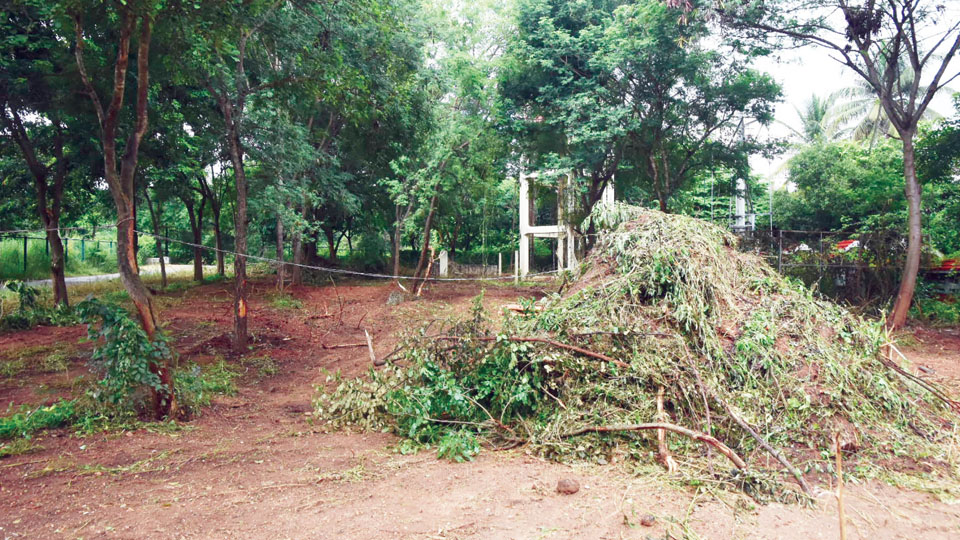 Instead of machines, MUDA could have used plant cutters, say environment activists

Mysore/Mysuru: Residents of Bannimantap and environmentalists are up in arms against the Mysuru Urban Development Authority (MUDA) for removing precious top soil from the Torchlight Parade Grounds in the name of making space for vehicle parking during Dasara.

The MUDA has taken up cleaning and levelling of the Bannimantap Parade Grounds in a hurry ahead of Dasara festivities. But residents say that the MUDA is discreetly assaulting the soil surface, which poses a threat to biodiversity.

With the countdown for Dasara celebrations having begun, the authorities, who were silent all these days, are now showing unnecessary haste in carrying out cleaning and levelling work.

As the Parade Ground was not used for Dasara for the past two years on account of the COVID-19 pandemic, bushes, plants and weeds have been growing rapidly in the arena, thanks to the copious rainfall that has been lashing the city for the past couple of months.

Against this backdrop, the MUDA has now taken up cleaning and levelling the ground, to make it ready for the grand parade event. But what has raised the eyebrows of environmentalists and naturalists is the deployment of earth movers (backhoes), which apart from removing plants and weeds, will take out a good depth of the soil surface (about 5 to 6 inches) too.

Environmentalists warn that this kind of soil erosion will deal a huge blow to soil fertility and the rampant destruction of the natural vegetation on the grounds too will have an impact on nature. They also caution that the uprooting of trees will severely affect the ecological balance in the surroundings.

Wondering why the authorities are not using plant cutters and other gardening equipment for ground cleaning works, residents claim that the use of earth movers and dozer machines will take out at least 5 to 6 inches of surface soil, which will severely affect soil fertility.

They point out that at a time when the Government has launched several initiatives for saving soil fertility, the MUDA is doing exactly the opposite. They are also venting out their anger against MUDA for resorting to unscientific and unconventional ways of cleaning and levelling the ground, while completely ignoring the environmental impact.

Saleem, an environmentalist, wondered whether the authorities are unaware of Government schemes and the initiatives of the Isha Foundation, founded by Jaggi Vasudev, for saving and conservation of fertile soil.

“While Sadhguru Jaggi Vasudev went around the world on a motorbike to launch ‘Save Soil’ campaign and while Government has come up with many schemes for conserving soil fertility, MUDA seems to have ignored such initiatives,” Saleem regretted.

Questioning why earth movers are used for cleaning the ground, Saleem said that the job can be done by using plant cutters and other garden equipment. “MUDA’s actions will not only take out fertile soil but also will make a huge impact on soil erosion, especially when there are natural calamities,” he added.