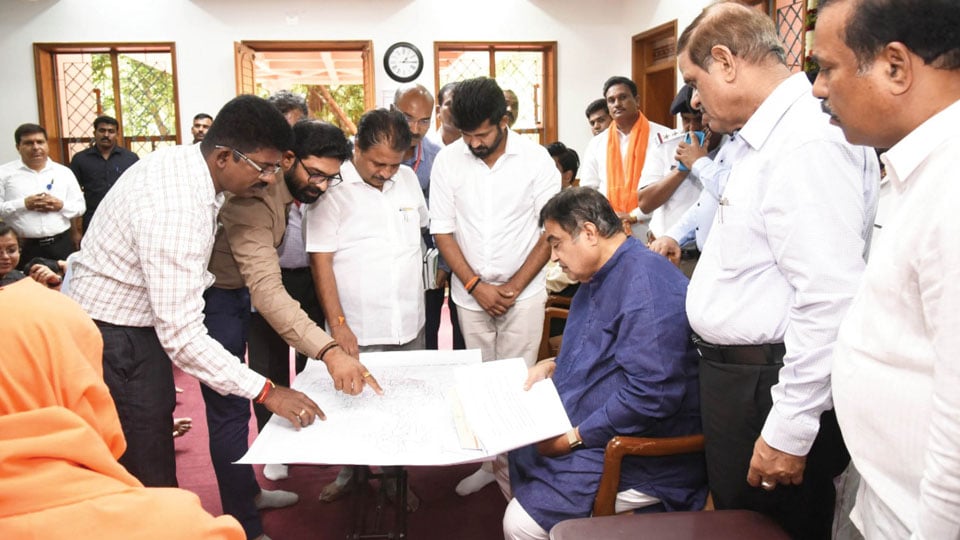 Mysore/Mysuru: Union Minister for Road Transport and Highways Nitin Gadkari, who was in Mysuru recently on a personal visit, has asked Mysuru Urban Development Authority (MUDA) officials to submit Detailed Project Report (DPR) concerning Peripheral Ring Road project so that it can be included under the Bharatmala Pariyojana (India Garland Project) Phase-2.

Nitin Gadkari was apprised of the Project by Mysuru-Kodagu MP Pratap Simha, MUDA Chairman H.V. Rajeev, MUDA Commissioner G.T. Dinesh Kumar and other officials, during the Union Minister’s visit to Suttur Mutt in the city on Monday.

Gadkari was presented a report on the 73.25 km long Peripheral Ring Road project that was prepared taking into account the city’s growth in the next 20 years and also as part of  the proposed Greater Mysuru Plan-2031.

MUDA Commissioner Dinesh Kumar told Star of Mysore that the Union Minister asked the officials to get the DPR done and approved by MUDA and thereafter forward the same to the Centre through the State Government, so that the project can be included in Phase-2 of Bharatmala Pariyojana.

Pointing out that the Peripheral Ring road finds mention in MUDA Budget, Dinesh Kumar said that the preparation of project feasibility report is underway following which the DPR will be prepared and the same would be forwarded to the Centre through the State Government’s Urban Development Department.