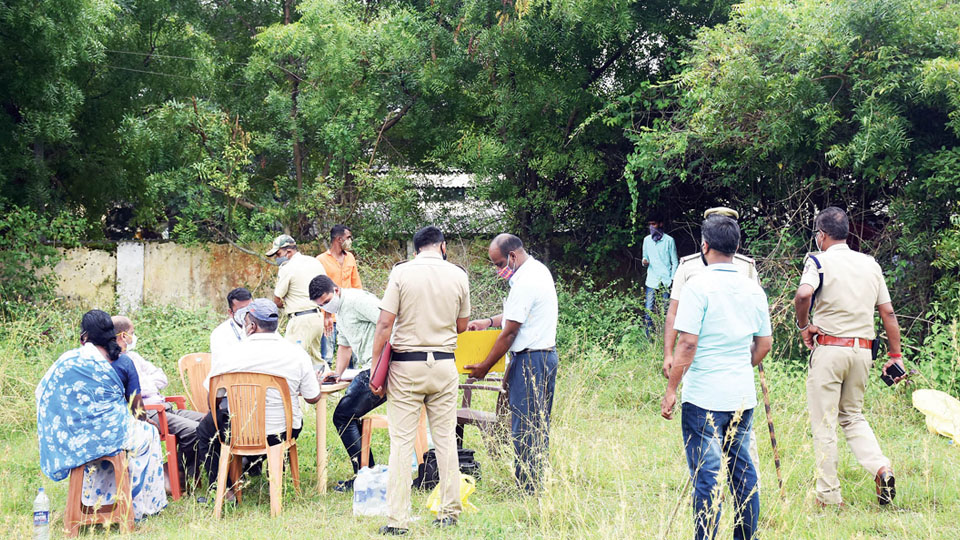 Mysore/Mysuru: Interesting details have emerged in the murder case of 24-year-old Umesh that was unearthed on Sept. 1 by two Beat Constables attached to Saraswathipuram Police Station. The body was exhumed yesterday from a secluded place in Janatanagar by a team from JSS Medical College.

The exhumation order was passed by the Magistrate as it was vital to get more forensic evidence in the case and the procedure was monitored by the Tahsildar. The forensic team was led by Dr. H.V. Chandrakanth, Senior Professor, Department of Forensic Medicine and Toxicology, JSS Medical College.

Speaking to Star of Mysore this morning, Dr. Chandrakanth said that the accused Pruthvi had crushed the skull of the victim with a cement boulder after a fight broke out amidst drunken stupor. Due to the impact, the left side of the victim’s head and skull bones were crushed and he died on the spot. A sickle, burnt playing cards, the murder weapon (a big cement boulder) have been recovered from the crime scene.

“The nature of the crime showed that the accused had nursed revenge since a long time and it looked like it was a pre-planned murder. Of course, it is the Police who have to prove the case in the Court and for that we have given enough forensic evidence. All procedures were followed as per Section 174 of the Criminal Procedure Code and the observations made by the Magistrate were corroborated with evidence,” he said.

Dr. Chandrakanth said that exhumation in the forensic pathology is the act of lawfully bringing out a buried dead human body for medico-legal purposes. This process is followed by performing a post-mortem examination on the body to find out the pathogenesis and pathophysiology of events that lead to the death.

“Apart from finding out the cause and manner of death, other circumstantial evidence is matched. In this case, the victim was buried in a 3-ft wide and 3-4 ft deep pit and he was placed in a semi-sitting position. The body was in a highly decomposed state as the crime had occurred a week back. Samples were collected for further tests and also for DNA sampling,” he explained.

For the Police, the autopsy report forms the backbone of an investigation. For the judiciary, it is critical evidence that can, with a single conclusive forensic expert statement, determine the outcome of a case.

This particular case was initially registered as a missing person case and later converted to a murder case. The accused are Manjesh, Sujith, Pruthvi and Yashwanth. The accused, during a drinking session at a bar, had blurted out about the killing and this conversation was overheard by the informants of Beat Constables Arjun and L.M. Prakash. The arrests were made later.