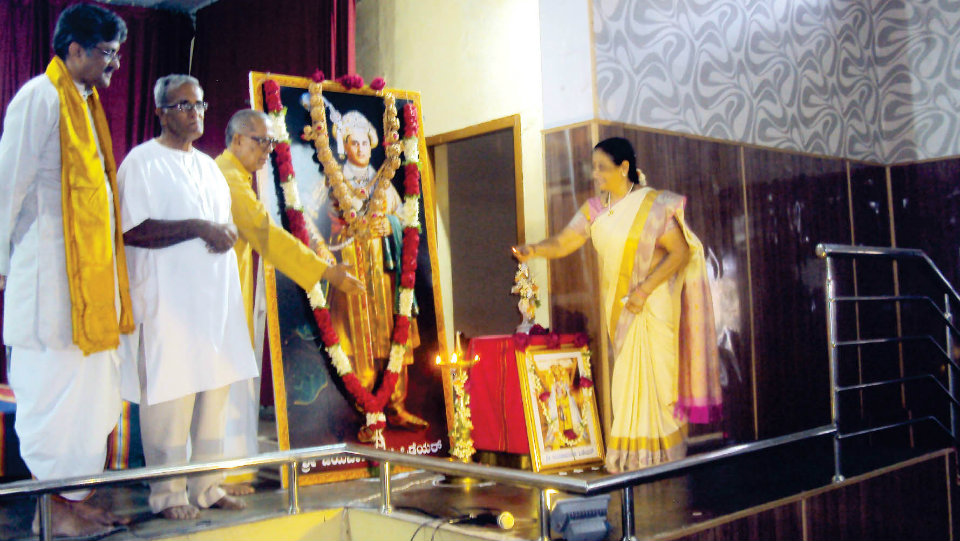 On the occasion of the birth centenary of Sri Jayachamarajendra Wadiyar, Sri Krishna Gana Sabha, Gokulam, had organised a musical tribute to the great king and a vaggeyakara as well, on 18th of this month at Alwar Kala Bhavan, Gokulam, in city.

The event was sponsored by Sridhar Raje Urs, President of the Sabha in  association with Kannada and Culture Department, Government of Karnataka.

Prior to this, a stage function was held, presided over by Sridhar Raje Urs. Musician and scholar Dr. R.S. Nandakumar was the chief guest. Senior musician Dr. Sukanya Prabhakar and Dr. C.M. Muniramappa were on the dais. The immense contributions of JC Wadiyar to the field of music were remembered by the dignitaries.

Later, ‘Vandeham Shive,’ a musical feature, showcasing the musical works of JC Wadiyar was performed by the students of Surabhi Gana Kala Mandira under the guidance of Guru Vidu. Dr. Sukanya Prabhakar.

The curtains were drawn with ‘Kayo Srigowri’, the nadageethe of Mysuru dynasty. The Sanskrit shlokas sung at the beginning and at the end saluting the Wadiyar, were with reverence to the great personality.

It is well-known that Jayachamarajendra Wadiyar was a ‘Srividya Upasaka’ and an ardent devotee of Goddess Devi. Highlighting the same, his kritis on Goddess Devi were melodiously rendered by Vidushis Meera Manjunath, Dr. Veena Ravikumar, Dhathri Kumar, Medha Manjunath, Nithyashree, D.N. Swathi and Manya Manjunath. Vid. G.S. Ramanujan and C.V. Shruthi supported well on mridanga and violin respectively. Lalitha Srinivasan and Vijaya  compered the feature with the details of each kriti impressively.