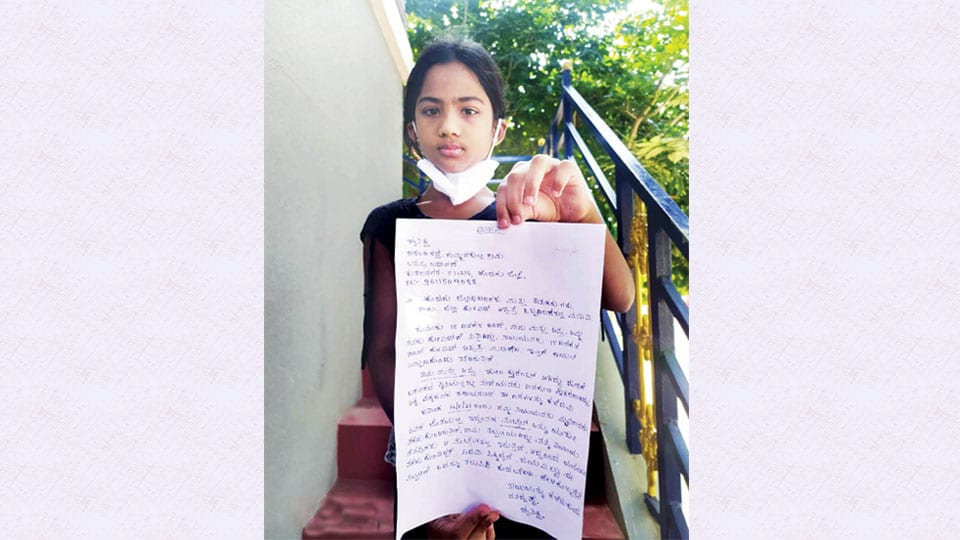 ‘My late mother’s phone is filled with her memories’: Girl pleads with Kodagu DC, MLAs to find stolen phone from COVID Hospital

Kushalnagar: A little girl who lost her mother to killer Corona has made a fervent appeal to the Kodagu Deputy Commissioner (DC) Charulata Somal, two MLAs of the district K.G. Bopaiah and M.P. Appachu Ranjan and also to the staff of Kodagu Institute of Medical Sciences (KIMS) to find her mother’s mobile phone which has been stolen from a KIMS ward, where her mother was admitted.

Thefts of mobile phones from KIMS, the designated Kodagu District COVID Hospital, has become common and many patients who lost their loved ones at the hospital have reported that the mobile phones have not been retuned with the bodies in case of deaths. Many have vented their ire on social media and also complained to the DC and the MLAs. According to patient relatives, there is not even one Closed-Circuit Television (CCTV) cameras inside the hospital for surveillance. Last week, a doctor, Shivakumar, was caught red-handed while accepting a bribe of Rs. 5,000 from a person to give good treatment to his loved one who has been admitted at KIMS. The doctor has been suspended now.

Holding the letter in her hand, Hrithiksha, daughter of a painter in Kushalnagar, has said that the phone had some of the best photos of her mother and she has to lead a life without her (mother). “Please find and return my mother’s phone,” she appealed.

Narrating her story, Hrithiksha said that her family of three tested COVID positive and her mother was admitted to KIMS where she died due to complications.

“I and my father are in home isolation now and we are not in a position to go out of the house. We depend on help from neighbours for food and other essentials. My mother died on May 16 and someone has taken her mobile phone as it was not returned to us when the body was handed over,” she wrote in the letter.

“I have become an orphan now and my mother’s phone contained all her good photos. All her memories are stored there. If someone has taken or have found my mother’s phone, please return it,” she has appealed. Today, a complaint has been lodged in Kushalnagar Police Station in this regard. “The hospital authorities returned the luggage but did not return the mobile phone. My daughter is deeply disturbed,” Hrithiksha’s father told Star of Mysore.

Usually patients are rushed to the COVID-designated hospital in an unconscious state or critical condition and attendants are not allowed to stay with them. The only means of contact with them is through phone, or when officials pass on information about the patient’s condition.

“Since family members are not able reach the patients through phones, they start to panic about their condition. It is unfortunate that mobile phones are being stolen at the Kodagu District Hospital. There is not even a single CCTV camera inside the Hospital so that at least someone can monitor the activities,” said Vasanth Kumar, a COVID volunteer in Madikeri.

Usually, the Hospital does not allow any valuable items like gold ornaments, money, credit cards, documents, etc. when patients get admitted. They hand over the valuables to relatives at the gate and take their signatures. Only mobile phones are allowed as the relatives have to contact the patients, said hospital authorities, requesting anonymity.

“It is inhuman to steal patients’ belongings. Most of the doctors and workers are putting their lives at risk to serve patients. It is painful to know that some of them are doing such things,” he added.

11 COMMENTS ON THIS POST To “‘My late mother’s phone is filled with her memories’: Girl pleads with Kodagu DC, MLAs to find stolen phone from COVID Hospital”