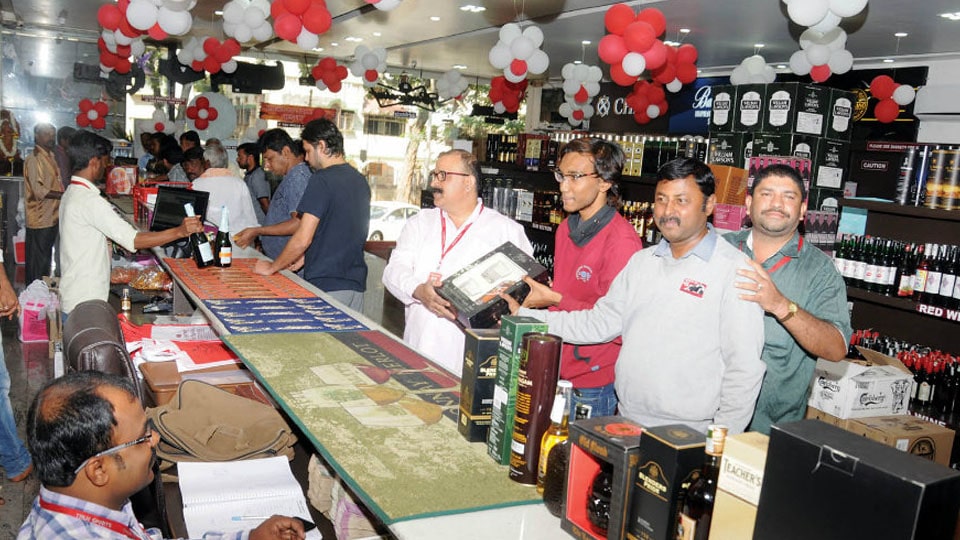 Mysuru/Mysore: Despite economic downturn, devotees of Bacchus (Roman God of wine) continued to splurge on liquor during the last days of 2019, resulting in unprecedented revenue for the State Excise Department. The Department is expected to end the year on an all-time high with liquor sales reaching Rs. 600 crore in the last ten days.

In Mysuru district too, New Year has begun well for liquor sellers (including wholesale and retail) as sales figures of the last two days is expected to touch Rs. 8 crore mark. The sales have witnessed a sharp increase on Dec. 30 and Dec. 31 of 2019. If the sales of the last 10 days are taken into consideration, the figures are likely to cross the   Rs. 8 crore mark.

Sales recorded at liquor outlets of Mysore Sales International Limited (it has exclusive rights to sell liquor supplied from the Government) in Hebbal and Bannimantap extension in city is about 38,000 cases of Indian-Made Foreign Liquor (IMFL) and 18,000 cases of beer on Dec. 30 and Dec. 31,  according to Excise Department sources.

At the True Spirits liquor outlet in city, there was heavy rush for liquor since early yesterday morning. “Crowds were unmanageable and we decided to allow batches of 20 customers at a time,” said Dilip Nachappa who owns True Spirits. But the crowd was decent and was not unruly at any given point of time.

The State Excise Department also has recorded a steep increase in liquor revenue and is expecting to meet its ambitious revenue target of Rs. 20,950 crore for 2019-20. The revenue generated in the month of December alone, as of 30th of the month, is Rs. 1,700 crore, which is highest for the year, according to Excise Minister H. Nagesh.

The Minister was also hopeful of achieving revenue target of Rs. 20,950 crore in the next three months. As far as beer sale is concerned, he said that in the year 2019, the Department has sold 27 lakh cases as against 26 lakh cases last year during the same period.

Data released by the Department has revealed that it has broken last year’s record of Rs. 481 crore from Dec. 21 to 31. As on Dec. 30, the Department collected Rs. 516 crore and is expected to make Rs. 70 crore on the last day of the year.

The last ten days of the year brings in higher revenue due to Christmas and New Year holidays, but revenues have seen significant increase this year. Interestingly, data reveals that sale of IMFL has surpassed beer.