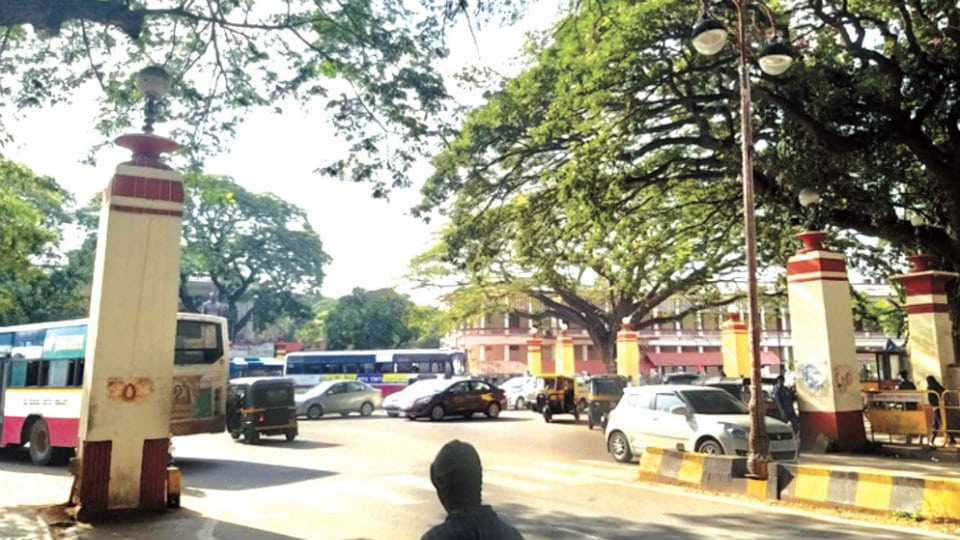 Mysuru: Apart from being home to many heritage buildings and structures of historical and architectural value, Mysuru is also known for its majestic arches, pillars and gateways. These architectural marvels, which are a treat to watch, are the gifts from Wadiyars, the erstwhile rulers of Mysuru.

Having given importance to art and culture, Wadiyars made sure to leave behind many impressive structural marvels and they today stand as a royal stamp, reflecting their grandeur and aesthetic sense.

Arches and Gateways add value to heritage structures and buildings that were built during the princely rule. Unfortunately now these Arches and Gateways which were once significant have lost its sheen and have become an eyesore to the visitors who visit Mysuru. The sad state of affairs is reflecting badly on the Administration that is spending crores of rupees for Dasara.

During my childhood, whenever Dasara festival was nearing, these Arches and Gateways used to get a facelift as it used to get repainted and the gate lamps would be replaced with new bulbs. But from past five years, these structures are being neglected.

The whole city is illuminated with colourful lights covering more than 95 Circles but whereas these structures have lost its importance and are left in the dark, in spite of many complaints to the higher authorities.

One of the most prominent Gateways in city is the Lalitha Mahal Palace Gateway that could be seen on T. Narasipur Road which is at threat as neither the Heritage Department nor the district authorities have secured it.

There are a lot of heavy-duty vehicles seen on this road travelling at a very high speed, and even the gates are damaged by these over-speeding vehicles. One wrong move by these break-neck-speed drivers will make this heritage structure crumble like a pack of cards.

Many lamps of Gateways have stopped glowing and many weeds are growing on structures. Arches and Gateways are also the major contributor to the heritage tag of Mysuru city along with the Palaces. So I request the authorities concerned to restore these magnificent Arches and Gateways which also contributes to the pride of the city. And also maintain these structures not only during Dasara but throughout the year.

Some time back, in a bid to further boost Mysuru’s claim to being a ‘Heritage City,’ the Tourism Department had proposed the construction of four heritage arches at its four entrances.

The objective of the proposal was to give all visitors to the city a glimpse of the city’s rich historic legacy. Personally I feel that the Department must restore the already existing and neglected Arches and Gateways before they take up the construction of heritage entrance arches at the city entrances.