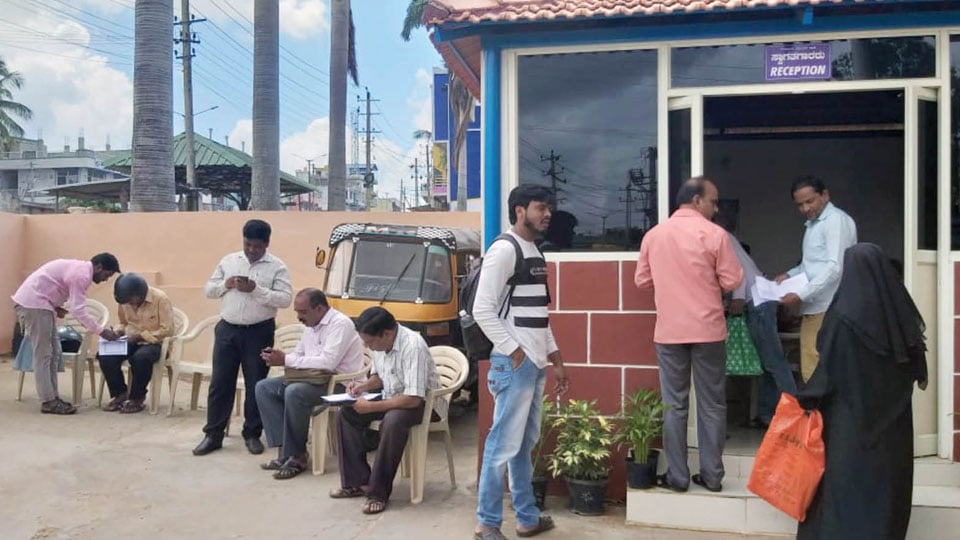 Mysore: Mysureans have invested a whopping 24 crore (initial estimate only) in Bengaluru-based blade company ‘I Monetary Advisory (IMA)’. This has come to light after the Police scanned over 700 complaints filed by cheated investors in Mysuru and calculated the amount mentioned in the complaints.

Today, the counter was closed due to an event at the Hall. It is estimated that more than 1,500 people from Mysuru and surrounding areas have invested in the fraudulent company.

Udayagiri Police Inspector Umesh said that all the complaints received will be compiled and collated carefully and later on will be forwarded to the SIT in Bengaluru, which is probing the scam.

The IMA scam is Karnataka’s version of Sarada chit fund scam that rocked West Bengal. This multi-crore ponzi scheme thrived on a politician-police-criminal nexus in the form of IMA, has rocked Karnataka and most of the investors are from Muslim community who have put in their hard-earned money, jewellery and savings into the hands of fraudsters. Mohammad Mansoor Khan, the promoter of IMA Group of Companies, is absconding and is believed to have fled to Dubai on June 8.

In the last 72 hours, more than 20,000 panic-stricken investors have registered Police complaints in Bengaluru and the stream of distraught investors continues to pour in from across the State and neighbouring States too.

The money invested by individuals from Mysuru is said to be in the range of Rs. 1 lakh and Rs. 55 lakh. Since Wednesday, the Udayagiri Police had issued more than a thousand formatted complaint forms to the IMA investors.

The investors were asked to submit IMA share certificate, receipts pertaining to investment under marriage, education and business schemes, copy of agreement entered into with IMA and a copy of bank pass book, along with the complaint.

Till noon today, over 700 complaints were lodged at Udayagiri Police Station and the number is expected to go further up as more and more number of cheated investors are likely to lodge complaints after compiling all the documents available with them in the next few days, with no deadline set for lodging of complaints.

Zabeena Banu, a retired Government School teacher and a resident of HUDCO Layout, Udayagiri, had invested her retirement monetary benefits of Rs. 22.5 lakh in IMA, hoping a good return on her investment. Now with the firm shut, Banu is left deeply depressed and her dreams of constructing a house has been shattered.

The modus operandi of IMA is cheating people through religion. IMA assured the investors that their investment schemes were ‘halaal’ (permissible in Islam) or ‘shariah’-compliant (interest-free transactions).

In this case too, the modus operandi was the same. IMA roped in local politicians, community leaders, moulvis and an army of agents to brainwash the community into believing that they were shareholders of the company and would get high return on investments.

The IMA scam smacks of a larger criminal nexus as the company survived for 13 years despite an alert by Reserve Bank of India and a forfeiture notice by the State Government, due to its “high connections”. In 2015, the RBI has sent alert to the state government warning that the IMA group was only a scam-in-the-making.

But no action was taken by the Police, which instead sent a report stating they could not take action under the Karnataka Protection of Interest of Depositors in Financial Establishment’s (KPID) Act, as the investors were giving funds as “partners” and not “depositors”. The funding was under limited liability partnership (LLP).

In Nov. 2018, RBI once again wrote to the government to investigate into the activities of IMA. The assistance commissioner of revenue department, which was probing into all ponzi companies to attach their properties, issued a forfeiture notice against IMA in newspapers, calling the attention of the investors to the fraudulent activities of the company.

The public notice also named 16 entities including Mansoor Khan, and asked the people to provide information about their movable and immovable assets. However, the police did not file an FIR citing procedural issues. A buzz in the political circle is that the scam was an open secret, but fearing the nexus and the backlash from the community during the elections, nobody tried to blow the lid off this scam.