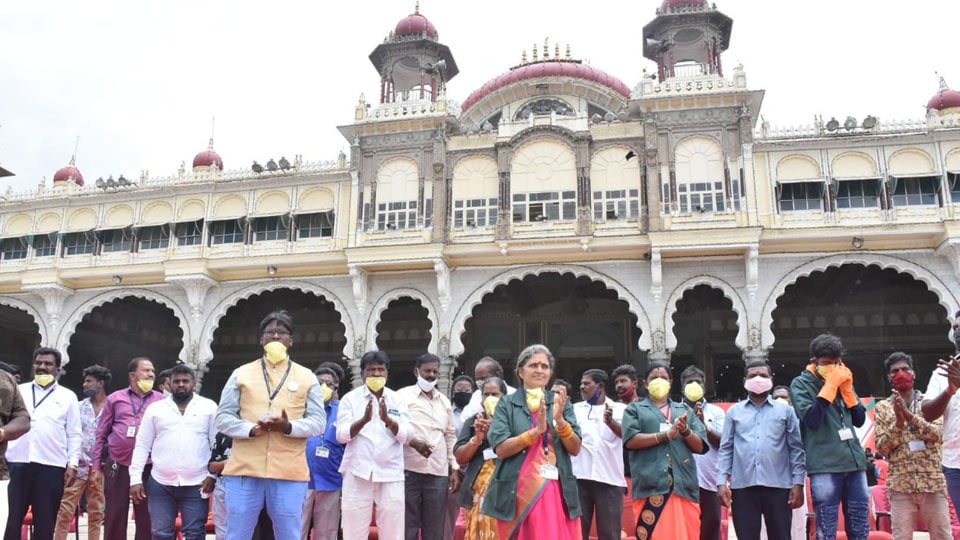 Mysuru/New Delhi: The Union Government this noon announced the results of annual survey of cleanliness, Swachh Survekshan 2020 and Indore once again retained the top spot as the Cleanest City of India. Indore bagged the spot fourth time in a row, Gujarat’s Surat on second spot and Maharashtra’s Navi Mumbai on third.

Mysuru got the India’s Cleanest Medium City Award for a population bracket of 3 to 10 lakh. Mysuru had won the award for the Cleanest City of India in the first two editions of the survey in 2015 and 2016, while Indore has retained the top position for four consecutive years (2017, 2018, 2019 and 2020).

Minister Hardeep Singh Puri said, “I visited Indore a few years ago, along with a member of a Japanese delegation. When we reached the city, I saw the Japanese going to various places in Indore. I asked him ‘what are you doing?’ He said ‘I was trying to find filth, but couldn’t’. I don’t think there could be any bigger testimony to the achievement of the city.” He told this to Shivraj Singh Chouhan after Indore won the award.

Congratulating the people of Indore, Madhya Pradesh Chief Minister Shivraj Singh Chouhan said the city has hit a four this time and surely will hit a six in the coming future. Varanasi was the adjudged the ‘best Ganga town’ in the central government’s cleanliness survey. Minister Hardeep Singh Puri interacted with select beneficiaries, swachhagrahis (Clean India Warriors), and Safai Karmis (Sanitation Workers) under the Swachh Bharat Mission-Urban (SBM-U) from different parts of the country through video conference.

The Swachh Survekshan 2020 covered 4,242 cities, 62 cantonment boards and 92 Ganga towns. This survey was carried out in 28 days. A total of 1.9 crore citizens across 4,242 cities of the country participated in the survey. Mysuru has bagged fifth place among Top 25 Urban Local Bodies with more than 1 lakh population. The first place here again was bagged by Indore followed by Surat, Navi Mumbai and Ambikapur.

Swachh Survekshan is meant to monitor the performance of Swachh Bharat Abhiyan, which was launched on October 2, 2014, the 150th birth anniversary of Mahatma Gandhi. The survey was introduced by the Government with the objective of generating large-scale participation in Swachh Bharat Abhiyan. It also aims at inculcating a spirit of healthy competition among cities towards becoming India’s cleanest cities.

The virtual ceremony was organised at Mysore Palace and over nine Pourakarmikas including Manjula and Nanjundaswamy who were selected for the interaction with the Minister were seated in the front row. As the award for Mysuru was announced, attendees and the Pourakarmikas cheered the news.