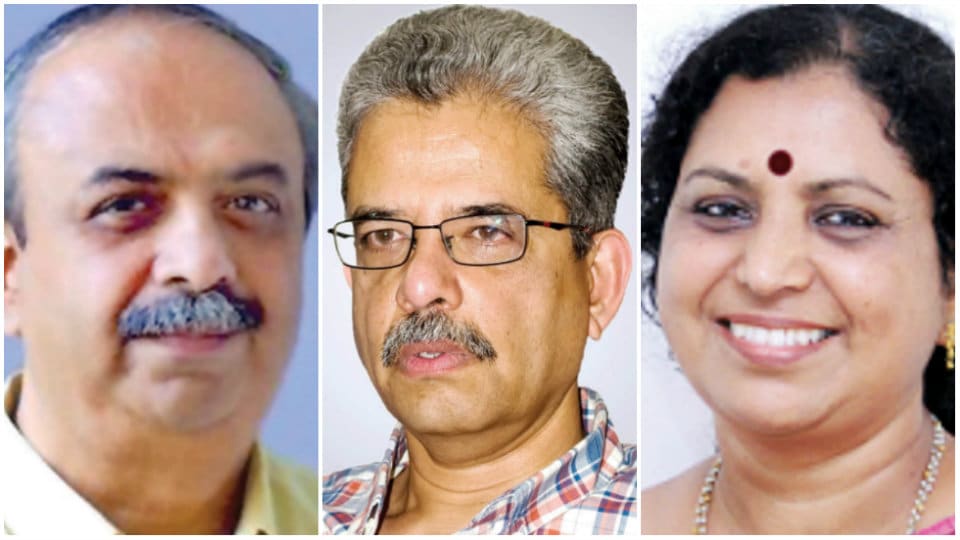 The countdown for Third Edition of Mysuru Literary Fest-2019 organised by Mysore Literary Association has begun with the Fest being held on Oct. 19 at Senate Bhavan in Manasagangothri from 10 am.

Star of Mysore will be profiling the renowned authors and intellectuals participating in the day-long Lit Fest. The three speakers featured today (Oct. 17) are K.S. Sachidananda Murthy, Suresh Menon and Prof. Vanamala Viswanatha.

The Resident Editor of Malayala Manorama and The Week at New Delhi, K.S. Sachidananda Murthy began his career as a Reporter with Indian Express, Bangalore from 1975 to 1982, covering politics, legislature, crime, metro affairs and developmental news.  In 1982 he joined The Week as its Correspondent in Bangalore.

In 1990, he moved to New Delhi as the editorial head of Malayala Manorama Group. He specialises in coverage of international and national affairs and has travelled to several countries with the President and Prime Minister of India to cover their bilateral and multilateral visits. He covered the 1991 revolution in Soviet Union which led to the disintegration of the Union and also covered the ethnic conflict in Sri Lanka.

He has been writing a weekly column Desheeyam on National  Affairs since 1990 for Malayala Manorama and an analytical column on current affairs, “Power Point” in The Week.

Title of his Talk at the Lit Fest: Literature and Social Media [12.30 pm]

A prominent journalist, author and a noted sports writer, Suresh Menon is currently the Editor of Wisden India Almanack (The Bible of Cricket) and Contributing Editor of  The Hindu.

He was one of the youngest Sports Editors and then Newspaper Editors in the country. He has reported from all the cricket-playing countries in a career spanning over three decades. His writings on politics, literature and sport have a global audience.

His books include: Champions! How the World Cup was Won; Sachin: Genius Unplugged; Pataudi: Nawab of Cricket; Bishan: Portrait of a Cricketer; Dream Team India: The Best World Cup Squad Ever.

Title of his Talk: Literature and Sport: An Eternal Golden Braid [2.30 pm].

An acclaimed translator and academic, Prof. Vanamala Viswanatha has taught English language and literature over the past four decades at several institutions in Bengaluru, including Indian Institute of Science, Regional Institute of English, Bangalore University and Azim Premji University.

She has contributed significantly to reshaping the English curriculum for predominantly underprivileged students by introducing and teaching Indian Literatures in English Translation, Gender Studies and Translation Studies. Deeply engaged with various facets of Kannada culture, Vanamala has anchored the Kannada news on Doordarshan for a decade.

She has worked as Honorary Director, Centre for Translation, Sahitya Akademi, Bengaluru and as a Member of the Advisory Committee, National Translation Mission. Apart from publishing several important essays in the field of Translation Studies, she has translated and introduced Sara Aboobacker’s Kannada novel (Breaking Ties, Macmillan India, 2001) and an anthology of Lankesh’s short stories (When Stone Melts, 2004, Sahitya Akademi), co-edited Routes: Representations of the West in Short Fiction from South India (Macmillan India, 2000); and translated J. Krishnamurti’s writing into Kannada. She has co-translated Ananthmurthy’s Samskara into Swedish (Samskara – rit for en dod man, Ordfront Forlag, 2001) and Torgny Lindgren’s Swedish novel into Kannada (Havina Donku, 2002). Her translation of The Life of Harishchandra (Harvard University Press, 2017), the first ever translation of a medieval Kannada poetic classic, in the Murty Classical Library of India Series, has broken new ground in the translation of Kannada classics into English. Her English translation of Gulavadi Venkata Rao’s Indira Bai, the first social novel in Kannada, in collaboration with Padikkal, is now published by Oxford University Press.

Title of her Talk: Why read a Kannada Classic: Reading Harishchandra Kavyam [3.15 pm]

NOTE: Those attending the Fest are entitled for Participation Certificates after 4 pm.