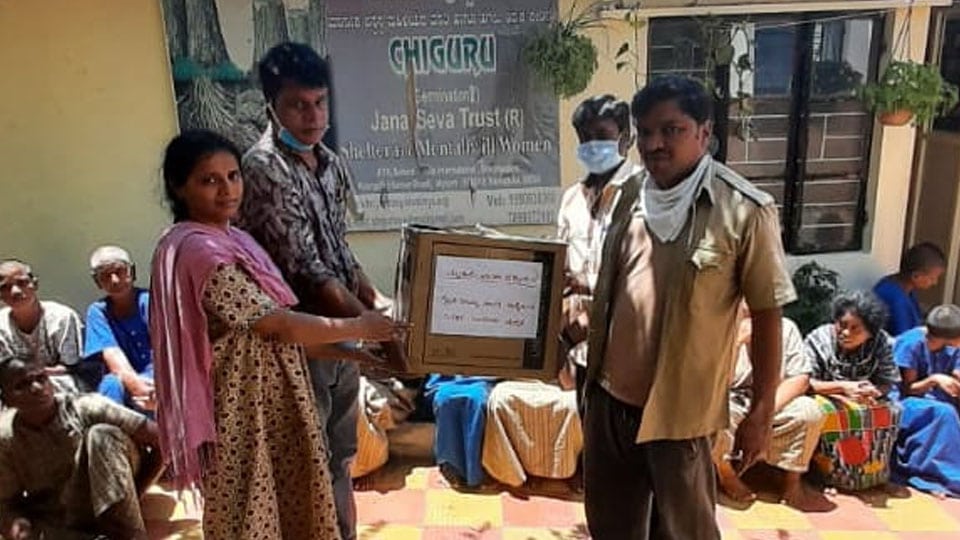 Mysuru Mirchi supplies free food to the elderly and needy

Mysore/Mysuru: With nationwide lockdown, it is the senior citizens, homeless, orphans, daily wage workers and many similar ones who are facing difficulties in these extreme conditions.

Mysuru, which is referred to as pensioner’s paradise, houses a good number of senior citizens for obvious reasons. The inevitable lockdown, a measure of social distancing to fight COVID-19, has worsened their situation leaving them helpless with no one to look after the elders locked in their own houses.

Noted film producer and actress Shruti Naidu, had recently urged the Mysuru district authorities to make suitable arrangements to cater to the needs of such senior citizens and other helpless persons. Now, Shruti Naidu, who also owns the hotel ‘Mysuru Mirchi‘, on Jayalakshmi Vilas Road, has come forward to reach out to such persons.

“Mysuru is one of the city which houses a lot of senior citizens. With nationwide lockdown, the authorities have restricted the services of maids and servants. Without such help, senior citizens find it difficult to cook and look after themselves. That is why Mysuru Mirchi has started reaching out to such persons along with orphanages, children, old age homes and so on by supplying the food to them,” said Shruti Naidu.

She goes on to add that such citizens can contact the number mentioned below along with ‘Mysuru Mirchi’ restaurant following which Mysuru Mirchi staff members would supply food at their doorstep.

Shruti Naidu has sought local authorities and Government agencies to share the details including location of senior citizens in the city. For details and help contact Mysuru Mirchi Restaurant’s Satyanarayan on Mob: 9880924832 or Rupendra on Mob: 9845113070.

Food grains packets were distributed to poor families of Hebbal Colony in city by various volunteer organisations. As the nation has completely shut down to fight Coronavirus, daily wagers are in dire straits. In this backdrop, many associations and organisations have voluntarily come forward to help the needy.

Likewise, each packet containing a variety of grains, including rice and pulses, worth about Rs. 250, was distributed to the needy families at Hebbal Colony on Saturday.