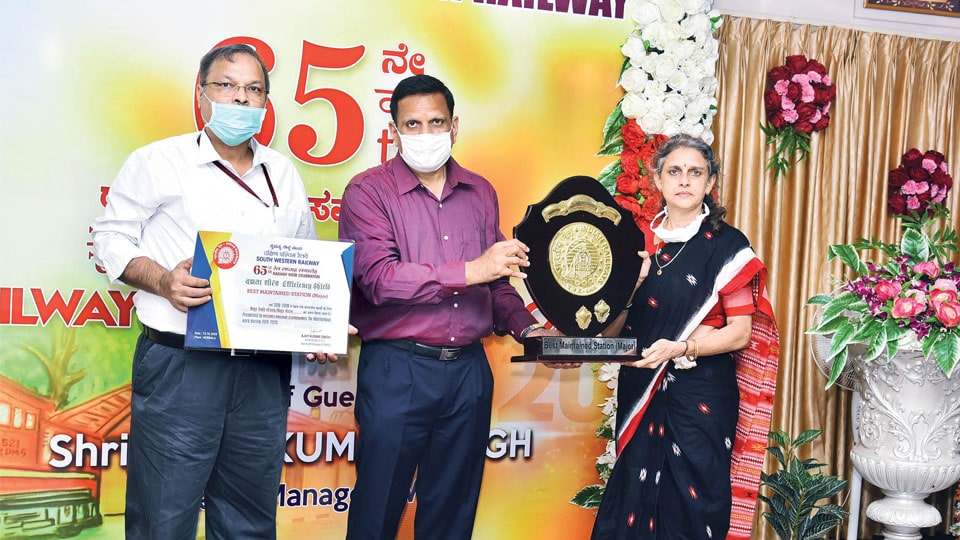 Mysore/Mysuru: South Western Railway (SWR) celebrated the 65th Railway Week in Hubballi yesterday and Mysuru Railway Station was adjudged the ‘Best Maintained Station’ for the year 2019-20 under the category of ‘Major’ Stations on SWR.

Under the Comprehensive Station Redevelopment Plan undertaken in 2019-20, Mysuru Railway Station saw the addition of many passenger-friendly initiatives with adequate care taken to retain the heritage value of the building.  The redevelopment of Station has brought appreciation from different forums calling Mysuru Station as one of the Best Maintained Stations in Indian Railways.

The Signal and Telecommunication Department (S&T) of SWR Mysuru Division has won the Zonal Efficiency Shield for 2019-20. The S&T Department recently upgraded signalling technology in Sakleshpur-Subramanya Ghat Section in record time, paving way for enhanced safety and sectional capacity despite facing multiple hurdles in the hostile territory as also battling health scare due to COVID.

The Railways can now explore the possibility of introducing additional passenger services in the Ghat Section, a demand remaining unfulfilled as the Commissioner of Railway Safety had imposed restrictions in operations of passenger services owing to safety reasons. The freight trains can now run at higher speeds leading to higher productivity. The Security Department of Mysuru Division has also bagged the Efficiency Shield for the year 2019-20.

Adding another feather in the cap of Mysuru Division, the prestigious Swarnajayanthi Weekly Superfast train running between Mysuru and Nizamuddin (New Delhi), which undergoes primary maintenance at Mysuru, was declared as the ‘Best Maintained Rake’ on South Western Railway for the year 2019-20.

READ ALSO  Only 150 passengers each side in Mysuru-Bengaluru train