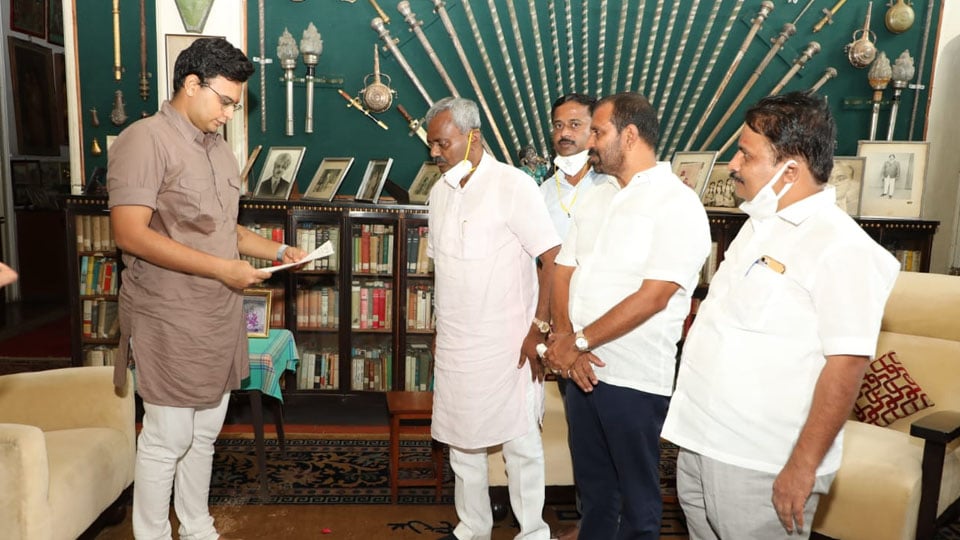 Mysore/Mysuru: District Minister S.T. Somashekar called upon the Forest Department officials to make Mysuru a model in the spread of green cover and asked them to concentrate on increasing greenery on Chamundi Hill.

He was addressing officials at a preparatory meeting ahead of World Environment Day (June 5) at ZP auditorium here on Thursday.

Reiterating that Mysuru should be a role model in terms of greenery, Somashekar said that all Departments concerned must work together to improve the green cover atop Chamundi Hill.

Directing the Forest officials to conduct a study on improving green cover, the Minister asked them to submit a report on the number of saplings that can be planted in all the 11 Assembly segments of the District and the Department’s readiness for the exercise.

MP Pratap Simha said he wanted the district to create a record in planting of saplings. Pointing out that the celebration of Environment Day would be more purposeful if over one lakh saplings are planted, he called for larger campaigns on environment and ecological conservation.

MLA L. Nagendra said that the people in highly polluted Delhi are getting some oxygen only because of roadside Peepal and Neem trees. Stressing on the need for growing these two trees in Mysuru too, he said that Neem trees, which are robust and sturdy by nature, can withstand strong winds and rainfall and hence is considered a better bet than other trees.

MLA S.A. Ramdas said that more importance must be given for scientific planting rather than concentrating on numbers. He suggested that people who come for jogging in parks must be engaged in taking care of plants and also planting of saplings.

Expressing concern over decreasing greenery on Chamundi Hill, he opined that the Forest Department must take immediate measures for green cover expansion.

University of Mysore (UoM) Vice-Chancellor Prof. G. Hemantha Kumar said that the Varsity has entrusted students to plant and also to take care of the saplings in the campus.

Pointing out that the University campus spread across 800 acres has over 25,000 trees and plants of various species, he sought the support of the Forest Department for growing more trees.

KSOU Vice-Chancellor Prof. Vidyashankar said that the University has distributed four saplings to each staff. While two saplings will be planted on the Varsity campus, the remaining two will be planted at their house, he added.

Deputy Commissioner Abhiram G. Sankar said that saplings must be planted at proper places and it is important to ensure that plants survive for long. Pointing out that it was improper to plant saplings under electric power lines, he said that such an action  poses a risk to the Department as the trees need to be trimmed when they grow up touching the power lines and as such the issue must be considered seriously.

Meanwhile, District Minister Somashekar has invited Yaduveer Krishnadatta Chamaraja Wadiyar as the guest of honour for the Environment Day celebrations in Mysuru on June 5. Well-known environmentalist Saalumarada Thimmakka, a Padma Shri awardee, has been invited to inaugurate the programme, which features mass planting of saplings with the theme ’Green Mysuru.’