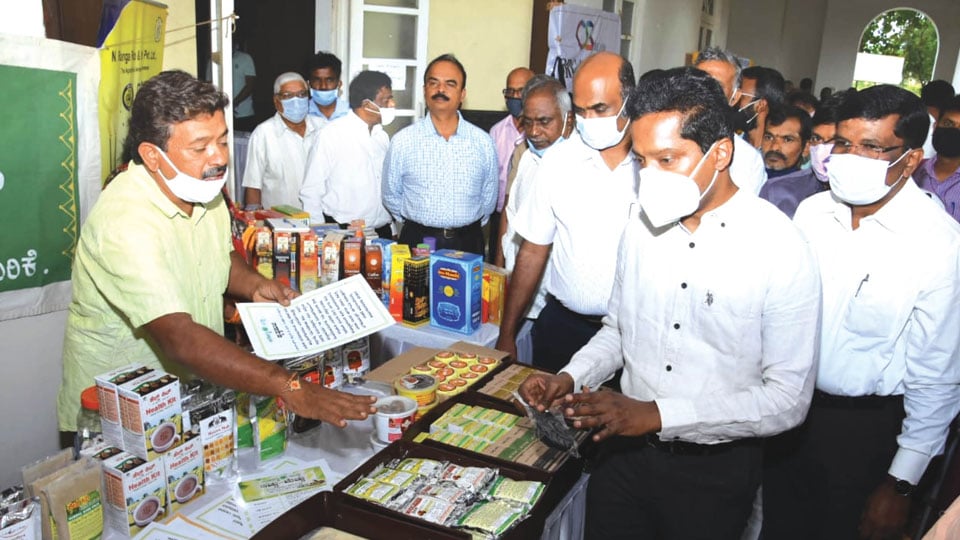 Mysuru stands second in State in IT exports: DC

Mysore/Mysuru: Maintaining that Mysuru stands second in IT exports in the State, Deputy Commissioner (DC) Dr. Bagadi Gautham said that several countries across the globe are looking at India as the country has the potential to lead the world in global digital revolution.

He was speaking after inaugurating the ‘Vanijya Saptah,’ organised jointly by the Department of Industries and Commerce, District Industries Centre (DIC), VTPC (Visvesvaraya Trade Promotion Centre) and DGFT (Directorate General of Foreign Trade), at the Zilla Panchayat hall here yesterday.

Pointing out that digital revolution is fast gaining pace in the country, Dr. Bagadi Gautham observed that the entire world may turn into IT and Digital era in the next 10 years. Asserting that Indian companies are all set to lead this transformation process, he stressed on the need for promoting small exporters who are exporting a variety of products and services.

Noting that the office of Karnataka Digital Economy Mission has already been set up in Mysuru, the DC said that the Government has come up with plans for extending the digital economy beyond Bengaluru. Arguing that Mysuru has a great potential to become a digital hub, he said that hitherto several unknown companies have come to the frontline of exports now and this is truly encouraging.

DIC Joint Director D.K. Lingaraju in his address, said that the works on the establishment of an Export House in Mysuru being taken up at a cost of Rs. 6 crore is under progress.

Pointing out that the Export House is coming up along the Ring Road at Hebbal, he said that the country stands 14th  globally in export of manufactured goods and 5th in export of services, after USA, Germany, Italy and China.

Domestically, Karnataka stands 5th in the country in export of manufactured goods and first in the service sector, he noted.

Continuing, Lingaraju said that Mysuru recorded an export trade of Rs. 2,914 crore in the six month period from Sept. 2020 till March 2021, he said that the establishment of the Export House will help in bringing all aspects of export trade under one roof, which in turn will help in further boost of exports. He highlighted that a District Committee of Exporters headed by the DC has been formed for making Prime Minister Modi’s dream of making every district an export hub, a reality.

Contending that 9 out of the 48 products which have earned GI (Global Indicator) tag of the Union Government are from Mysuru, he said that the DIC will render all help in the manufacture and export of  these products on a much larger scale. An exhibition  of export products was organised on the occasion.