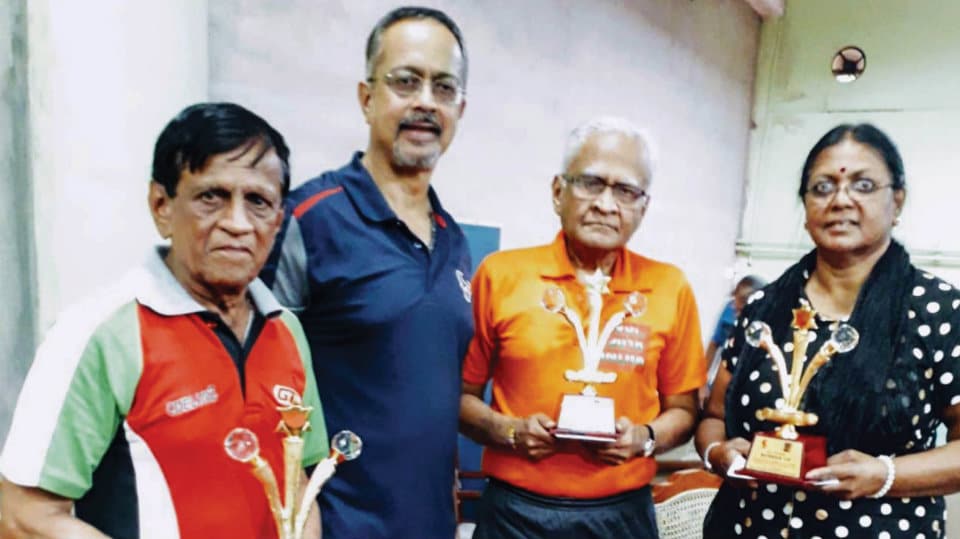 In Men’s 75-plus age group final, much fire work was expected. KVK and Dr. Sainath, both had won two matches each in League to fight the final.

KVK, a doyen player of Vet TT from Mysuru and also the eX-President of Mysore District TT Association, beat Dr. Sainath 3-0. It was one of those days when KVK could do nothing wrong. Every FH and BH attacking strokes of his found the table corners leaving Dr. Sainath stranded without a reply. A very creditable performance by KVK.

In an earlier round, Dr. Sainath playing against Gopalan created a record of some sort.

Gopalan, an ex-National Team Gold winner in 75-year group, playing his consistent game was leading 2 games to 1 and 10-4 in the fourth game needing just a single point to win the match.

Sushila could not repeat her last two tournament’s performance of beating Lathika, who countered successfully every attacking move by Sushila and also brought in many FH smashes for a comfortable 3-0 win in the final. Lathika is used to getting Gold repeatedly over the years. It was the third consecutive Silver for Sushila, who is relatively a newcomer to TT.