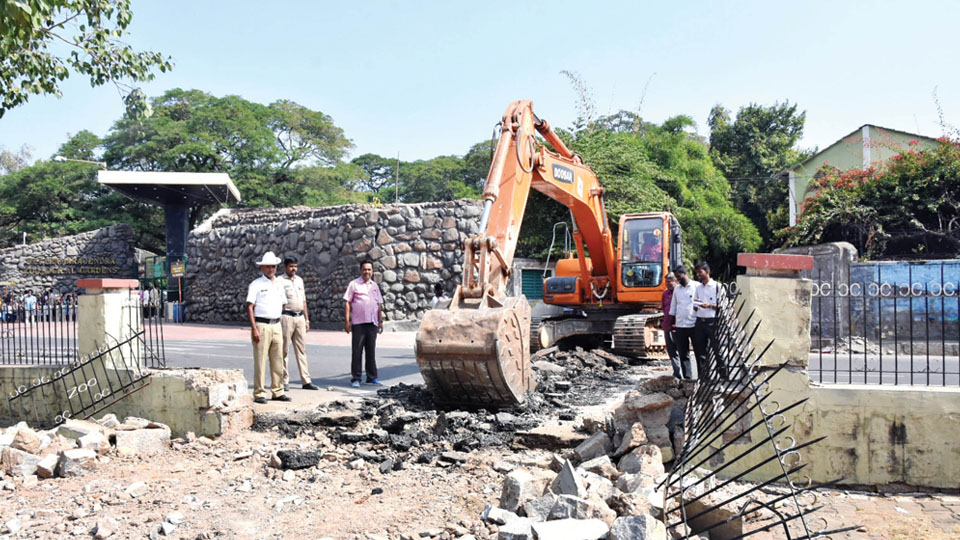 Mysuru/Mysore: The construction work of a subway to enable visitors and tourists to cross the Shalivahana Road (road in front of the Zoo) from the parking lot began this morning.

The road usually witnesses heavy traffic throughout the day and the subway will ease the rush.

The subway will connect the Zoo from the parking lot and vice-versa. Following the construction of the subway, movement of vehicles has been banned on the Zoo road and alternative roads have been provided by the Police.

The tender for the construction of the subway at a cost of Rs. 1.75 crore has been awarded to Vinyas Builders of Bengaluru, who has sought six months time to complete the subway construction.

Delay in works: The subway works was scheduled to commence from Jan. 2 and the Police had given a deadline for the completion of the construction by Feb. 15.

But as there was influx of tourists to city, the work was postponed for 15 days and as the works began today (Jan. 17), it is scheduled to be completed by March 2. The digging of trench between the parking lot and the Zoo will take about two to three days, sources said.

Mysuru Zoo Executive Director Ajit M. Kulkarni, speaking to Star of Mysore said that Vinyas Builders have asked for six months time to complete the subway construction, but the Builder has been asked to complete the works at the earliest to prevent traffic issues.

He further said that Zoo Assistant Engineer Aravind has been deployed at the construction spot to check the quality of works. The company that has been awarded the construction tender would be held responsible for any sub-standard works, he added.

The Zoo Executive Director said that adequate lightings would be installed inside the subway and precautions will be taken to prevent flooding of the subway during rains.

Painting on the subway walls with ‘Wildlife Conservation’ as the theme would be taken up once the construction is completed, he added.