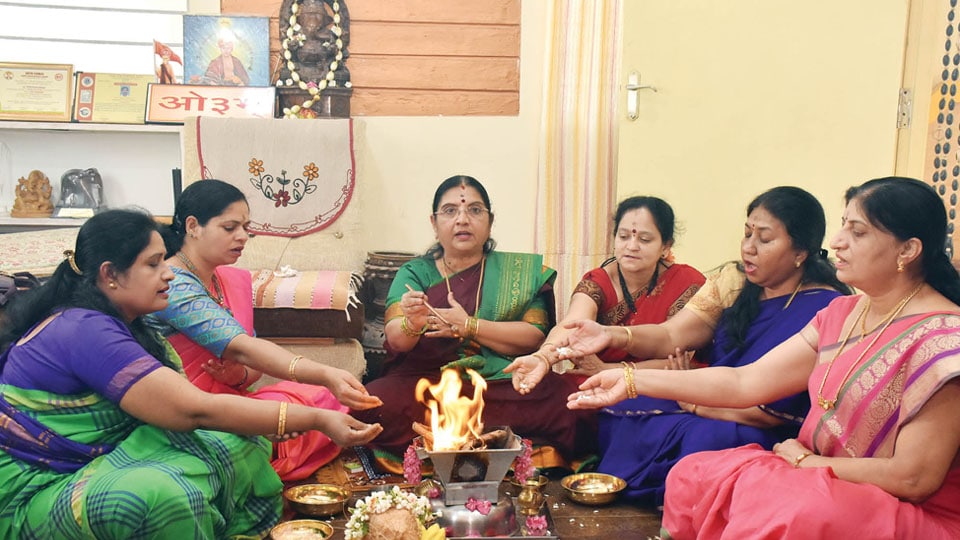 Women priests in India are not unusual, they are not the norm either. There are no curbs on women from becoming priests either. A closer reading of ancient texts first written in the 15th century indicates their presence and involvement in several rituals.

Women philosophers and priests like Ghosha Kakshivati, Vak Ambhrini and Vishvavara Atreyi have also composed and contributed hymns pertaining to marriage in the Rigveda that continue to be used in rituals today.

It is not clear when the roles of women in Hindu religious practices changed. Social scientists believe that the change coincided with the advent of caste system and the introduction of the concept of purity based on this. Subsequently, women priest system was curbed and their roles were relegated indoors under the control of patriarchal institutions.

Joining many women purohits to challenge patriarchy which traditionally allows only Brahmin men to perform religious rites is Dr. P. Bhramarambha Maheshwari from Mysuru. She has been performing the rituals since 34 years and even teaching them to a considerable number of interested students.

A resident of Srirampura Second Stage, Dr. Maheshwari has been performing all the 16 Shodasha Samskaras mentioned in the Shastras and teaching them to nearly 80 next-generation young female purohits.

Speaking to Star of Mysore, Dr. Maheshwari said, “My parents, S. Prasanna Murthy and T. Leelavathi hail from T. Narasipur. At 16, I married K.C. Vijaykumar. Later, after the death of my father, a number of questions started haunting me such as what is death, what would happen to his soul after the death and so on. Then, in 1984, I met Sri Brahmadev Swamiji of Biligiri Rangana Betta. I asked him the same questions and he assured me that I could find answers to all these questions through Vedas. As per his instructions, in 1988, I started studying Vedas under the tutelage of Ganapathi Krishna Bhat and began practicing a Vedic lifestyle.”

“The Swamiji had conducted Upanayana to a young girl, daughter of Radhakrishna Shastri, in Udupi in 1996 for the first time. I also underwent Upanayana ceremony and wore Yajnopaveetha. Venkatarama Sharma taught me Upanishads. I then participated in various programmes such as mass marriage held in Vaddagere of Maddur, organised by Swamiji and a yajna held in Bengaluru in 1990 by Arya Samaja. I also completed various Vedic courses. In 2001, I participated in Sanskrit Festival held in Banaras Hindu University and chanted Vedas. Ever since that time, I have participated and conducted Hindu rituals,” she said.

She has extensively travelled all over the country and even abroad and has been conducting discourses about Veda and Upanishads in Kannada, English and Hindi. While conducting rituals, she tries to explain their meaning and its philosophical aspect in local language.

“Many celebrities and politicians, including noted Kannada actors Dr. Vishnuvardhan, Lokesh and movie director Girish Kasaravalli, have invited me to conduct Vedic rituals at their homes and I have been conducting all important rituals from birth to death,” she added.

She has conducted many personality development programmes and spiritual discourses at numerous schools and colleges as well as various temples and corporate companies. She is now teaching Gayatri Mantra, Yajna-Yagas, Homa-Havanas, all the 16 Samskaras and other such Vedic rituals to interested women at her Ishavasam Vedanaada Kendra.

Currently, over 40 students including those from US, UK and Australia are learning Paurohitya and Vedic Studies virtually through online courses. The Department of Information and Publicity has released a documentary on her and even BBC has telecast her interview.

She proudly states that society has now accepted female purohits and is respecting them. “One can become a Brahmin which literally means a person who knows, by conducting proper Karmas and not just by birth. I am a living example as I was born to a Veerashaiva family. Irrespective of caste and creed, anybody can learn Vedas,” she said.