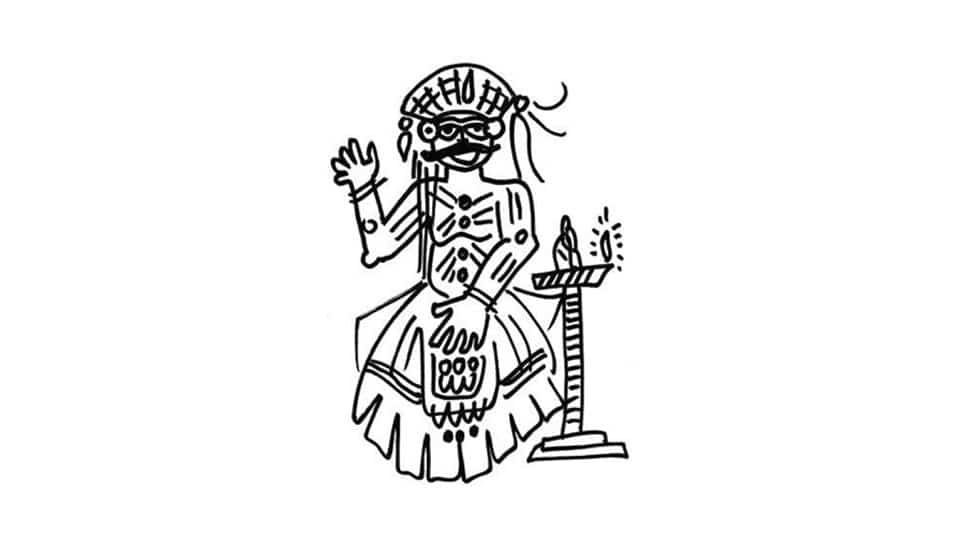 As a child in Mumbai, I watched Rajan Uncle perform Chakyar Kootu. My parents were economic migrants from Odisha. My neighbours were from Maharashtra, Kerala and Tamil Nadu. And we got to see cultural performances that no one in Odisha or Maharashtra, would have had access to, like Chakyar Kootu. With his white painted face and a golden hat, Raja-appa (as we would call him) would speak in Tamil and Malayalam and I would watch the audience laugh and sneer, late into the night.

What are you saying, we asked him. So, for our benefit, he performed once in English. And we realised he was telling stories from the Puranas. But, while he was telling stories, he was also making political, cultural and social comments. Some of them sarcastic. Some cynical. Some mischievous. He told us that this was the performance art of the Vidushaka, the clown, who would convey the people’s ire to the king in a fun way.

When art is stripped of politics, it is reduced to entertainment for the patron (like Apsara dancing for Indra in Swarga) it fails in its very purpose — to elevate the mind and soul (like Shiva dancing before the Rishis in the Deodar forest). Its metaphors become more about fantasy and less about reality. In the 19th and 20th century, after systematically destroying the ‘devadasi’ culture, by equating them with prostitution, dance and music was claimed by the elite society in South India, as a tool to keep alive India’s classical tradition, adequately sanitised of all carnal underpinnings, to convey stories of Gods and Goddesses aesthetically, on stage. They were seen as spiritual, not political. But is that right?

Narasimha emerging from a pillar to disembowel Hiranyakashipu who tortures peace-loving Prahalada is politics. Shiva impaling Andhaka on his trident for seeking to capture Parvati is politics. Vishnu as Mohini selectively distributing the nectar of immortality between Devas and Asuras is politics. Ramayana and Mahabharata deal with property disputes and marital rights. They are narratives that explain dharma, adharma and dharma-sankat to the kings who came later. Performing these tales is not to forget about life, but to enable people to negotiate it.

Why do we never see performances on stories like the rivalry between the sons of Chamu and Bhamu, who were contesting for the throne of their maternal grandfather? One day an elephant died inside the Palace. Bhamu’s son challenged Chamu’s son to prove his strength, pick up the dead elephant and carry the carcass outside the Palace. Chamu’s son did this with ease.

But, as soon as he stepped out of the threshold, the elephant in his arms, Bhamu’s son shut the Palace gates, declared him polluted, and claimed his grandfather’s throne as the purer grandson. This story is the oral lore narrated by one community of leather workers of North India to explain how they were denied their high status by their brothers who grabbed the land. It is part of their caste identity and injustice embedded in folk memory.

Would performing this in classical Bharatanatyam style cause political, cultural and social disharmony? Will it strip the temple dance of spirituality? Why have our mighty politicians and bureaucrats and judges become over-sensitive Princesses of Indian folklore who were burned even by moonlight? Why can’t the narrations of the Chakyar and the Vidushaka not just entertain but also make us strong, like the hermits who slept on beds of nails?

READ ALSO  From Vedas to Puranas

Decoding Mythology Dr. Devdutt Pattanaik
Courage conquers crisis
If someone needs you, be there and stay…