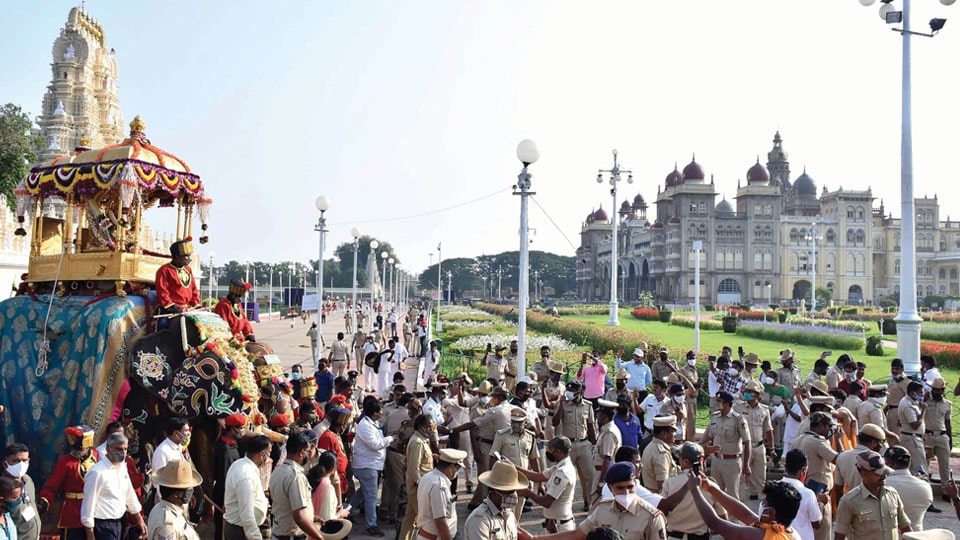 Mysore/Mysuru: Contrary to its tag as ‘People’s Dasara’, this year’s ‘Nada Habba’ will go in history as one that was not opened for aam aadmi.

Dasara without people cannot be imagined. But this time the festivities were held by keeping people away due to COVID-19. Tourists, who were greeted with folded hands every year, were unwelcomed to the city due to pandemic. A dull atmosphere would have prevailed in Mysuru had Chief Minister B.S. Yediyurappa not revoked the order issued by Deputy Commissioner Rohini Sindhuri regarding the closure of all major tourist attractions in and around the city till Nov. 1.

All major crowd-pullers like Yuva Dasara, Yoga Dasara, Raitha Dasara, Makkala Dasara, Mahila Dasara, Heritage Walk, Food Mela, Film Festival and other annual events were cancelled, due to spike in Corona positive and casualty in Mysuru City and District in the last one-and-a- half months.

For the first time, the number of audience to inaugural function atop Chamundi Hill, daily cultural programmes at Palace and the Jumboo Savari inside the Palace premises, was fixed by the three-member Technical Team fearing the outbreak of Coronavirus. Although the Palace was lit on all ten days, no person was allowed inside the sprawling premises. Only 50 persons were given entry into the Palace for all nine days including the artistes to perform.

Vehicles of visiting public and tourists were not allowed to stop for a second in Central Business District (CBD) either to enjoy the illuminated streets, circles or traffic junctions or to take the selfies. The restrictions came after the CM announced that Dasara- 2020 will be celebrated in simple manner due to Corona and cancelled all events. The Technical Team (managing COVID-19 situation in Karnataka) that was sent to the City to oversee arrangement had made several recommendation including restricting the audience.

The KSRTC did not operate the special buses due to lukewarm response from tourists. Even the special trains operated by Indian Railways did not attract people due to fear of pandemic.

Cancellation of the colourful torch light parade at the Bannimantap Grounds disappointed thousands of people. Traditional items like ‘Vajra Mushti Kaalaga’ held inside the Palace premises on Ayudha Puja day was also cancelled because of pandemic. The royal family too scaled down the annual Sharannavarathri celebrations and did not allow relatives, friends and media to witness it. State-level Dasara sports also did not take place.

The absence of audience was felt on Jumboo Savari day with no bustling of activities as the sprawling Palace premises was empty with no hustle-bustle of tourists, braving the scorching sun, and waiting for hours together to witness the colourful procession. Only a few chairs were put in front of the Palace for the VVIPs.

The thunderous applaud by the crowd after the passing of every cultural troupe was missing this time.  In all, this year’s Dasara will go down in the history as Dasara sans citizens.

2 COMMENTS ON THIS POST To “‘Nada Habba’ held sans Mysureans”