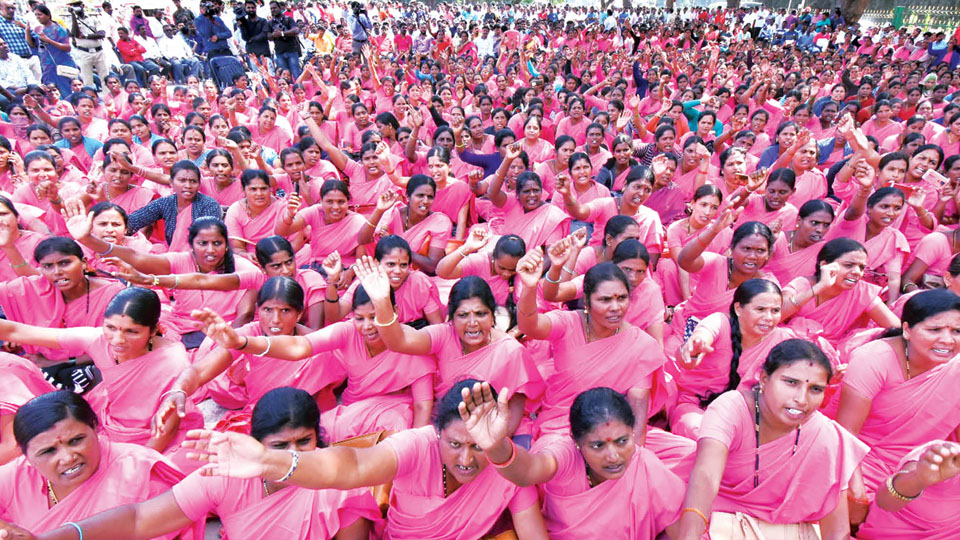 Mysuru/Mysore: A massive rally by workers and employees marked the Nationwide General Strike called by a host of Trade Unions and Left Parties in city this morning.

The members of various Trade Unions, who converged at J.K. Grounds, took out a rally in two batches to the Town Hall, where a conference was organised.

The Trade Unions are seeking fulfilment of their 13-point charter of demands which include: Measures for creation of jobs and job security; Setting up of Labour Courts in all Districts; Abolition of workers contract and outsourcing systems such as FTE, NEEM and NEESA; Dropping of privatisation moves of public sector; Minimum wages of Rs. 21,000; Pension guarantee of Rs.10,000; End to Foreign Direct Investment (FDI) in key sectors; Statutory facilities to workers of unorganised sectors and Remunerative prices for farm produce through implementation of Dr. Swaminathan Committee Recommendations, among others.

However, the strike evoked poor response in city, as all essential services, general services and Government Offices — both Central and State — functioned as usual. KSRTC buses operated normally with no untoward incidents.

KSRTC Urban Division Divisional Controller (DC) S.P. Nagaraj told SOM that bus service has been absolutely normal in the city with 444 buses making nearly 6,000 trips on 434 routes. There have been no reports of stone-pelting on the buses so far, he added.

KSRTC Mysuru Rural Division DC R. Ashok Kumar too said that there was no disruption of service in mofussil operations. Nearly 700 buses made 4,000 trips on 672 routes as usual. Barring a single incident in Kodagu, where a KSRTC bus belonging to Mandya Depot was pelted with stones, there have been no reports of any untoward incidents from anywhere in Mysuru district, he said.

However, Banking services were affected to some extent, as barring SBI and IOB, all other public sector banks took part in the strike. Mysuru District Bank Employees Association’s H. Balakrishna told SOM that except for State Bank of India (SBI) and Indian Overseas Bank (IOB), the employees of all other public sector banks are taking part in the strike and attending the conference at Town Hall.

Services at Government-run and private Hospitals too were not affected. However, a majority of industries were shut down today in support of the strike.