Home » News » Navarathri at Palace: Golden Throne to be assembled on Sept. 18 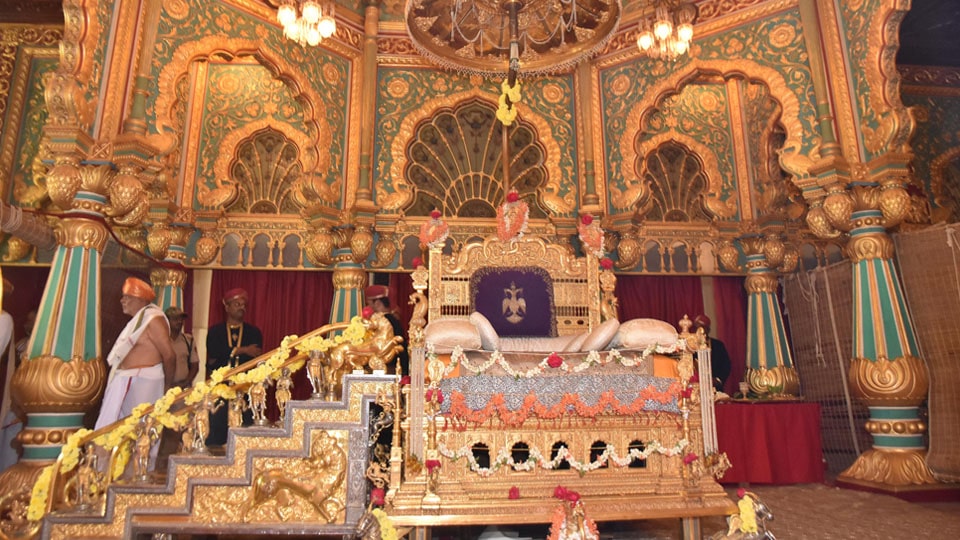 Navarathri at Palace: Golden Throne to be assembled on Sept. 18

Mysore/Mysuru: Marking the beginning of Navarathri celebrations (Dasara-2020), the work of assembling the Golden Throne will be held at an auspicious timing in Amba Vilas Palace here on Friday (Sept. 18).

In view of this, there will be no entry of tourists to the Mysore Palace till 2 pm on that day.

Dasara will begin on Oct. 17 and culminate on Oct. 26 with the Vijayadashami procession within the Palace premises.

A Private Durbar by the royal family of Mysuru during Dasara celebrations had been one of the main attractions. Holding the Khaas Durbar (Private Durbar) has been in practice for many centuries.

According to the Palace almanac (Panchanga), the dismantled parts of the gem-studded throne will be brought out from the strong room situated in the basement of the Palace and then start the process of assembling it in the Durbar Hall.

The royal family has fixed an auspicious time of 6.30 am on Friday for the beginning of rituals. The throne will be fixed in the Durbar Hall between 8.30 am and 12.30 pm. In view of this ceremony, a special Chamundeshwari puja and Ganapathi homa will be performed in the Palace premises after 6.30 am. This will be followed by Poornahuthi.

The throne assembling work will take place in the presence of Pramoda Devi Wadiyar and senior officers of Mysuru District Administration.

After puja, the ‘Pattada’ horse and cow will be brought near the Kalyana Mantap premises where puja will be offered. Since Dasara elephants have not arrived yet, one of the jumbos belonging to the royal family, will be offered puja symbolically.

Like every year, all the close circuit (CC) cameras installed inside the Palace will be covered with cloth to keep the entire activity as a closely guarded secret. After assembling of the throne, the curtains will be put at the Durbar Hall to keep it away from the sight of people. The last part of ‘Simha Shikara’ object will be fixed on to the Golden Throne on Oct. 17 between 5.30 am and 6 am, a few minutes before the start of Private Durbar.

Experts from Gejjagalli to assemble Throne

Eight parts of the Golden Throne and six parts of the Silver Bhadrasana are dismantled and kept in the strong room. After the poornahuthi, the parts will be brought to the Durbar Hall amidst tight Police security.

As per tradition, four throne assembling experts from Gejjagalli in Mysuru taluk are expected to arrive at Palace on Friday. While the throne will be assembled in Durbar Hall, the Bhadrasana will be fixed at Kannadi Thotti, according to Palace sources.