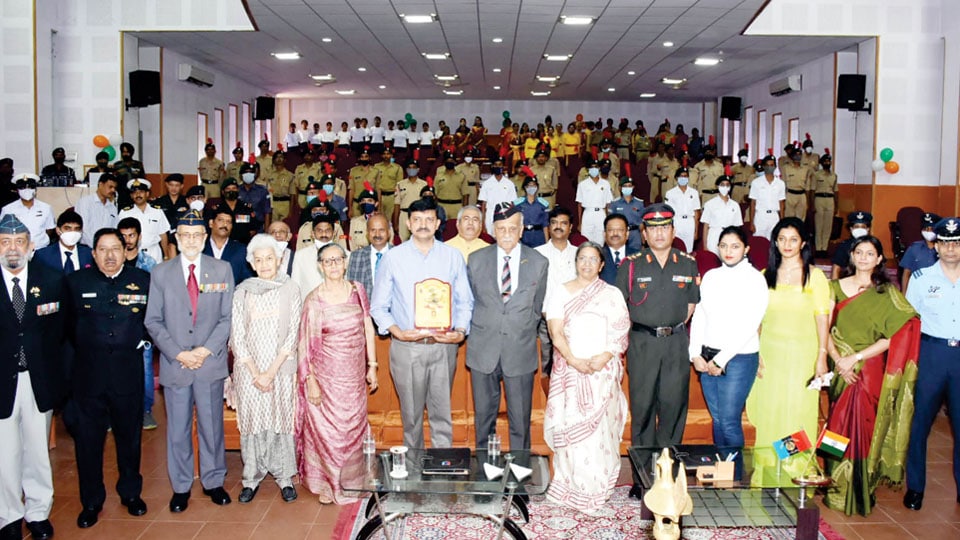 NCC fetes two next of kins of 1971 war martyrs

Mysuru/Mysore: Marking 75 years of Independence as also 50 years of India’s victory over Pakistan in the 1971 war leading to the creation of Bangladesh, the National Cadet Corps (NCC) is celebrating the occasion as ‘Vijay Shrankla Aur Sankritiyon Ka Maha Sangram’ across the country from Nov. 28 to Dec. 19 this year.

As part of the celebrations, the Mysuru NCC Group felicitated the Next of Kins (NoKs) of the two martyrs — Flying Officer K.P. Muralidharan of 20 Air Squadron and Risaldar B.M. Kaveriappa of the 66 Armoured Regiment — at a programme held at Cauvery auditorium in Karnataka State Open University (KSOU) premises on Hunsur Road here this morning.

The NoKs who were felicitated are Lalita Krishna Kumar, sister of Flying Officer K.P. Muralidharan and B.M. Machaiah, son of Risaldar B.M. Kaveriappa.

As part of the celebrations, 75 NoKs of martyrs of 1971 war will be felicitated at 75 locations across the country.

About Flying Officer K.P. Muralidharan: Flying Officer Kotteiezath Puthiyavettil Muralidharan hailed from Nilambur Kovilakom in Mallapuram district of Kerala. Born on Oct. 6, 1945, he was commissioned into the India Air Force on Oct. 29, 1966 at the age of 21. During the 1971 Indo-Pak War, Muralidharan was serving with 20 Sqn. known as ‘Lightnings’ and was based at Air Force Station in Pathankot. He took off in his Hunter (A-462) for a mission from Pathankot and was involved in a dog fight with enemy aircraft. He was last seen flying north of Peshawar in combat with a PAF Sabre and was shot down by the enemy Sabre. His aircraft crashed inside the enemy territory.

Risaldar B.M. Kaveriappa: Born on Feb. 4, 1931 at Kadangamarur in Virajpet of Kodagu district, Kaveriappa joined the 66 Armoured Regiment in September 1969 and was appointed as a Troop Leader which he served till the last day of his life.

Kaveriappa was in command of 1 Troop Bravo Squadron. While moving to reinforce 3 Troop, his tank was hit by an enemy RCL Gun and he along with his crew were killed.