Home » Columns » Abracadabra By K. B. Ganapathy » Nebulae over BJP campaign in Karnataka: What message you send to your voters is of utmost importance 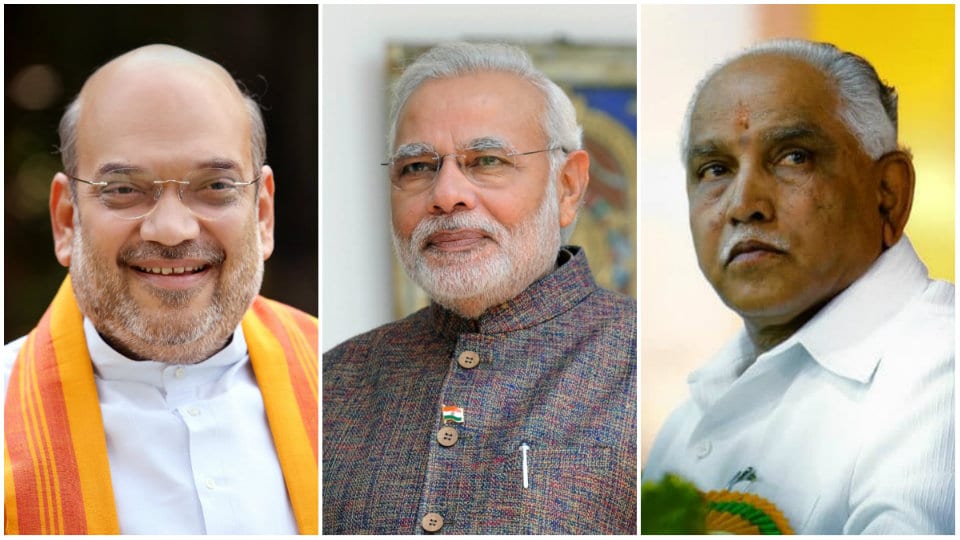 Nebulae over BJP campaign in Karnataka: What message you send to your voters is of utmost importance

A Kannada TV Channel discusses why not a Bengalurean as CM this time?!

The feeling among Lingayats all over the State is that in the event of a hung Assembly, should the BJP and the JD(S) form an alliance Government, the prospects of Yeddyurappa becoming the Chief Minister is very dim. And BJP’s Delhi High Command will have its own sinister designs. This perception of the present election scene does not augur well both for BJP and Yeddyurappa. Advantage is to Siddharamaiah and his Congress. ­­­­­

I am not a prophet of doom but I am certainly one who can see the straws in the wind and predict the ensuing storm. Presently, I am seeing such signs in the Karnataka BJP camp.

It is difficult to say if Amit Shah, the BJP National President, made a mistake by declaring B.S. Yeddyurappa, the State BJP President (age 75), as the future Chief Ministerial candidate as early as in 2016 when he came to Karnataka. It has ruffled the feathers of other contenders to the CM’s Office so much so these ambitious men seem to be schem­ing to sabotage Yeddyurappa’s choice and chance. These aspirants are  adopting many subtle ways as also ways that are NOT fair, just and equitable to knock-out Yeddyurappa. This is because BJP is  seen as a sure winner in the May 12, 2018 Assembly elections — either as a single Party or as an alliance partner.

However, these BJP aspirants for the CM’s Office seem to be oblivious to the danger of BJP losing this election to the crafty and ruthless incumbent Chief Minister Siddharamaiah’s Congress as a result of their scheming to nudge Yeddyurappa off the CM’s chair.

‘Operation Dislodge Yeddyurappa’ was a success. Thereafter, the State BJP was like a rudderless ship in the high seas. That is another story…

However, it was indeed providential that those who successfully schemed to dislodge Yeddyurappa in 2011 could not succeed in occupying the CM’s chair as Yeddyurappa succeeded in getting his own men in his place. Here too, of the two, one betrayed him. Let it be.

I have a gut feeling that a replay of 2011 is likely to take place should the BJP win in this 2018 elections.

Reasons: BJP High Command gave G. Janardhana Reddy’s family and associates seven tickets to contest. However, as if to pull wool over the eyes of the voters Amit Shah said he would not allow Janardhana Reddy (not given ticket) to canvass for BJP candidates!  Whom is he fooling?

Now look at the way the same Amit Shah refused to give a ticket to B.Y. Vijayendra, a deserving candidate in all respects with a good winning chance, in comparison to his main rival in the Varuna Constituency.  BJP did not have any good candidate in this Constituency. Therefore, the local BJP leaders persuaded Vijayendra to enter Varuna. Amit Shah and the whole world knew he had begun to canvass and the response was electrifying.

And again the predators eyeing the CM’s chair ensured that the ticket was denied to Vijayendra because he is the son of Yeddyurappa. The sad part is that it was done in an insulting manner on the day he was going to the Returning Officer to file his nomination papers.

If ticket for two or three members in a family of other BJP leaders could be given why not to Yeddyurappa’s family? Janardhana Reddy’s associates and family members are okay but not Yeddyurappa’s, that too he being the President. Surprising!

Now comes the news that Yeddyurappa is asked not to share stage with Narendra Modi in his rallies beginning from May 1 , 2018. Yeddyurappa would be with Modi in only one of the 15 rallies Modi was scheduled to address. What message will this send to the voters? The explanation is that all the three ‘Star Campaigners’ of BJP — Modi, Amit Shah and B.S. Yeddyurappa — being on the same stage will hamper canvassing in many other Constituencies. In fact, I would say Yeddyurappa seen with Modi on the same stage in 15 rallies would create a wave, like we used to have Indira wave, instead of the present BJP breeze. Look at Siddharamaiah. He is always with Rahul Gandhi in Karnataka and it is creating the wave.

I guess, in the given scenario, keeping Yeddyurappa off Modi campaign is also a part of the scheme crafted by the two aspirants of BJP, with strong RSS backing, for the CM’s chair. Earlier the BJP High Command snuffs the ambitions of these men in the bud better it is for the BJP to achieve victory in the polls crossing the magic number of 113 seats.

It is said, there is already a whispering campaign in North Karnataka, following denial of ticket to Vijayendra, that the BJP is likely to ditch Yeddyurappa after the elections.

Further, the feeling among the Lingayats all over the State is that in case of a hung Assembly should the BJP and JD(S) form an alliance Government, the prospects of Yeddyurappa becoming the Chief Minister is very dim. And BJP’s Delhi High Command will have its own sinister designs.

This perception of the present election scene does not augur well both for BJP and Yeddyurappa. Advantage is to Siddharamaiah and his Congress. BJP High Command must realise Yeddyurappa has better understanding of Karnataka voters and also their sympathy than the BJP High Command in Delhi.

By the way yesterday afternoon I was surprised to find in one Kannada TV channel  a programme discussing about why no politician from Bengaluru, with 28 MLAs,  has become the Chief Minister since independence?  Why not a BJP leader from Bengaluru become the Chief Minister if BJP comes to power? The programme showed the images of some of the important leaders who had won in the past, including that of MP Ananth Kumar. What does it suggest? Think of the timing of this programme!

I can only say this. The present BJP campaign strategy to diminish Yeddyurappa’s stature and role does not augur well for BJP’s victory. And if BJP loses in Karnataka, who wins? Of course, the Congress. And who will win in 2019 Parliament elections? The BJP, of course, but with a reduced majority.

Narendra Modi and Amit Shah should do a lot of introspection before the sands of time slips between their fingers.

Remember the countdown for the 2018 elections. 12 days to go. Good luck to all Parties.

5 COMMENTS ON THIS POST To “Nebulae over BJP campaign in Karnataka: What message you send to your voters is of utmost importance”