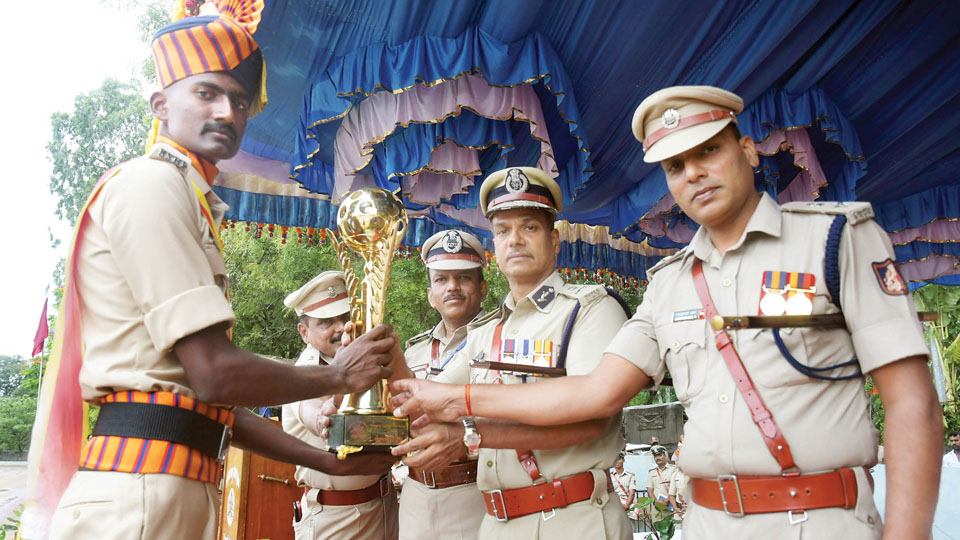 Firstly, the ceremony was held amidst rains with continuous drizzle. Over 268 KSRP Constables passed out from the Additional Training School. Secondly, it was the last official event for KSRP Additional Director General of Police (ADGP) Alok Kumar, who has now been posted as ADGP (Law and Order).

Alok Kumar turned emotional many times on stage while guard of honour was accorded to him and tears rolled down his cheeks while he was delivering his passing out parade address. He said that the KSRP was memorable for him and the Police wing was close to his heart.

Last ride in a KSRP van

After ending his speech, KSRP ADGP Alok Kumar requested the KSRP Commandants for a last ride in a KSRP van. Touched by his request, the Commandants agreed and Alok Kumar travelled in the KSRP blue van for the last time from the parade grounds to the breakfast venue. Inside the van too, Alok Kumar recalled his fond memories in KSRP and told officers that he will miss being in the force. He was accompanied by KSRP 5th Battalion Commandant R. Janardhan, Deputy IGP M.V. Ramakrishna Prasad and Principal of Additional Training School K.B. Doremani Bheemaiah, who is also the Commandant of 12th batch of Tumkur Special Reserve Police.

In all, 268 candidates (117 from Mysuru and 151 from Tumkur) passed out after being trained in all basic policing from July 2021. ADGP Alok Kumar inspected the parade and also witnessed the professional quick march and slow march performance.

In his speech, Alok Kumar asked the Constables not to deviate from the path of honesty and uprightness. “KSRP is not less than any other force and the personnel play an important role in maintaining law and order and also during emergency situations like COVID or natural disasters. Never try any shortcuts as you will land in trouble and we have seen many examples like the recent PSI recruitment scam,” he said.

No shortcuts to success

“There will be hurdles and challenges in your personal life and professional life and you have been trained to face  them. There are many graduates and post graduates here and I am glad that the educated are entering the force. Work hard and success will follow and there is no shortcut to success,” he added.

Alok Kumar also exhorted candidates not to fall into vices like tobacco consumption and alcoholism. “Lives have been destroyed and we have seen many such cases. Follow the line of duty and you will end up with a successful career. If you are dissatisfied with the KSRP career, write departmental examinations and go to higher posts. Opportunities are  ample,” he added.

Among the KSRP Constables passed out today from the fifth batch Mysuru, eight have completed their post-graduation, 66 undergraduates, 42 PUC and one SSLC. There are four engineering graduates. In the 12th batch of Tumkur Special Reserve Police, there are six candidates who have completed post-graduation, 90 undergraduates 48 PUC and 7 SSLC. There are eight engineering graduates here.