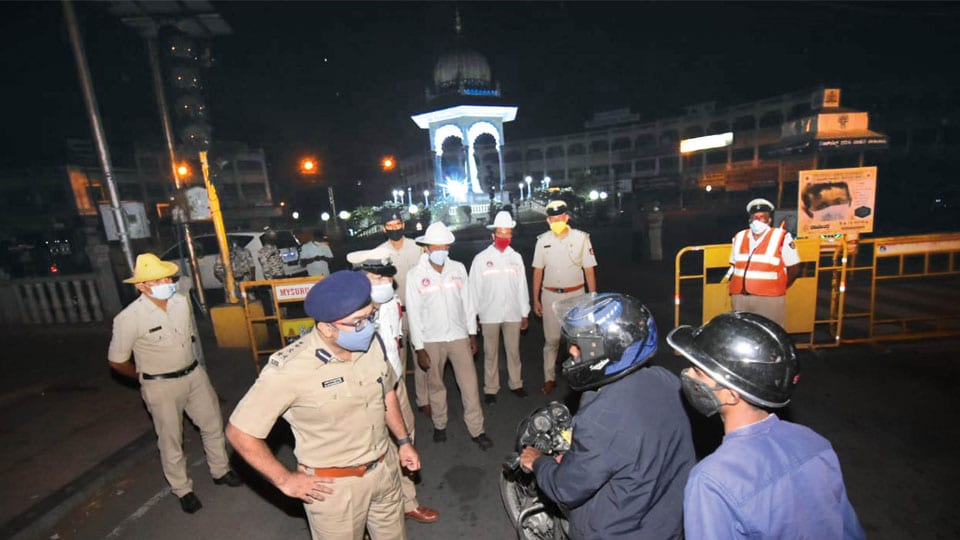 Night Curfew: Police top brass get on to City Streets

Mysore/Mysuru: In the wake of Karnataka Government deciding to impose a night curfew between 9 pm and 6 am till  May 4 to curb the spread of Coronavirus, the entire Police machinery in the City has got on to the streets including City Police Commissioner Dr. Chandragupta, Deputy Commissioners of Police (Law and Order) Dr. A.N. Prakash Gowda and (Crime and Traffic) M.S. Geetha Prasanna, jurisdictional ACPs, Inspectors and Sub-Inspectors along with personnel.

They are doing night rounds to strictly enforce rules so that there is no violation. In addition to night curfew, a weekend curfew has also been put in place for the same duration. “Movement of individuals for all non-essential activities has been barred. No person shall leave their homes or shall move on foot or by vehicle or travel or stand or roam around any road or public places during the said hours,” said Dr. Chandragupta.

“The restrictions we are imposing may inconvenience people. However, these steps are necessary to prevent the spread of the virus. Request you to abide by them,” the Top Cop said, asking the City’s force to implement the curbs strictly.

As per the Government order, businesses should shut shop before 9 pm and those who had opened the shops beyond permissible hours were asked to close. In a blow to businesses recovering from lockdown losses, bars, pubs and theatres remained closed with hotels limiting to parcel services.

Any person — except people from essential services and the exempted services — violating the directions will face action as per the provisions of Section 51 to 60 of the Disaster Management Act, 2005, besides, legal action under Section 188 of the IPC and other legal provisions as applicable.

The Police said there has been a recent surge in COVID-19 cases and therefore it is imperative to put in place strict measures of isolation and social distancing to contain the spread as a lot of non-essential movement of people and vehicles during night has been reported.

Barricades were placed across the roads at eight junctions including K.R. Circle, Hardinge Circle, Metagalli Junction, Railway Station, JLB Road and Ooty Road junction to prevent unnecessary movement of vehicles. Interestingly, though the shops and businesses were closed at 9 pm, there were movement of vehicles and the Police were seen questioning the commuters on the purpose of their movement.

Section 144 was imposed after 9 pm and motorists were informed not to stop their vehicles on the thoroughfares. They were told about Section 144 where gathering of more than five persons in a given place is banned. Section 144 during nights will be in force till May 4.

Apart from strictly enforcing rules in the Central Business District, the Police patrol teams and COVID-Appropriate Behaviour (CAB) Teams were seen in residential areas asking people who were on roads to go home. Loudspeakers were also used to inform about the ban orders.