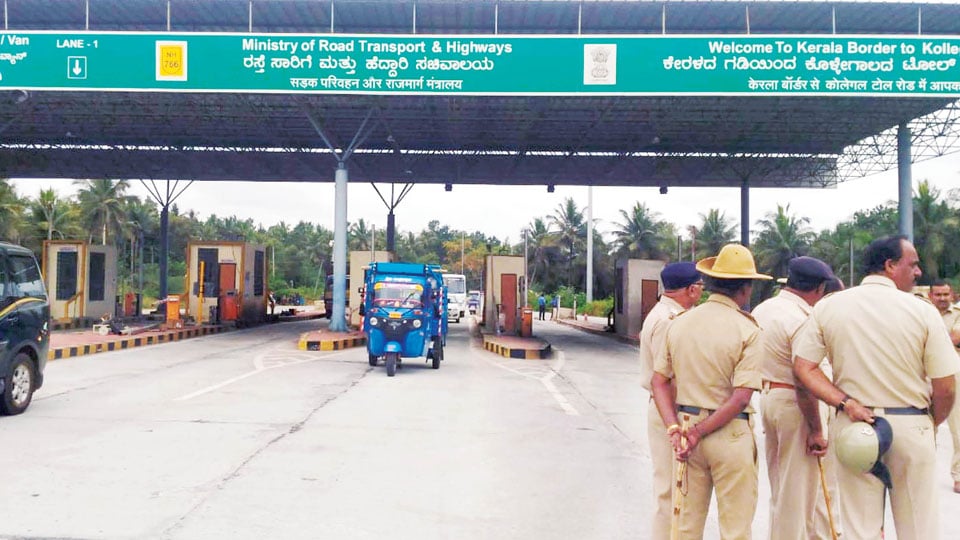 Mysuru: The move of National Highways Authority of India (NHAI) to collect toll on Nanjangud Toll Plaza near Kadakola via National Highway-212 (now NH-766) is ill-planned and poorly executed as the toll booth is not equipped with FASTag Sensors that enable smooth passage of vehicles with FASTag. This means, a commuter has to pay toll despite having FASTag on his vehicle.

FASTag is a sticker that needs to be put at the front windshield of the vehicle. The FASTag then becomes the radio frequency identity of one’s vehicle and it is automatically read by the sensors placed at Toll Plazas. The Sensor will read the tag and allow the vehicle to pass smoothly without the vehicle waiting in a queue. However, the Toll Plaza at Nanjangud (K.N. Hundi) is not FASTag-enabled.

Commuters reaching Ooty told Star of Mysore this morning that they had to wait in long queues at the Toll Plaza despite having FASTag and recharging the same. “I paid the toll as the toll booth manager told me that their toll booth is yet to be upgraded with FASTag Sensors. This is just fleecing. The highway authorities should have made all arrangements before implementing the rule. Worse, if vehicles do not have FASTag, they have to pay double the toll,” said Senthil Kumaran, who was travelling from Bengaluru to Ooty this morning.

The NHAI has started levying toll on NH 766 on the Mysuru-Nanjangud Road that touches Ooty and the Mysuru-T. Narasipur Road that reaches Kollegal. Toll is being levied on Tamil Nadu and Gundlupet-Moolehole Road that touches Kerala. All these roads are part of NH-766 (earlier NH-212).  The toll system has been enforced at the Toll Plaza at Kadakola (K.N. Hundi, Nanjangud) and at Yedathore on the T. Narasipur Road.

READ ALSO  My only objective now is to defeat CM and his close associates: Sreenivasa Prasad

Many travellers told SOM that they need at least 15 days for affixing FASTag sticker and link it to their bank accounts (FASTag accounts of banks) so that the toll is automatically deducted. “When it comes to rules, why only the public is penalised and why NHAI is ill-prepared,” asked Sabitha, who was travelling to Bandipur this weekend. Even she was of the opinion that the FASTag Sensor system should have been in place at Toll Plazas before the FASTag rule was enforced.

Farmers protest; toll collection suspended: Over 200 farmers staged protest at the K.N. Hundi Toll Plaza this morning opposing the toll collection. Toll collection has been opposed by local residents, farmers and other organisations as the road is their only lifeline to move their agricultural and horticultural produce to APMC markets, Kerala and Tamil Nadu.

Following the protest, toll collection was suspended till today evening and all vehicles were moving freely to their destinations. The protests were led by farmers organisations and over 200 farmers had assembled there. They said that the Nanjangud Highway is the only link that connects Mysuru to Nanjangud, Mysuru to T. Narasipur and Gundlupet to Moolehole.

The road is taken by farmers who take their produce to Kerala and Mysuru. There is no service road on the Highway that facilitates the movement of farmers and local residents. “Paying toll on a highway for every trip is illogical and takes away most of the money that the farmers earn,” the protesters argued. They warned that every day there will be protests forcing the NHAI to roll back the toll.

ONE COMMENT ON THIS POST To “No Fastag device at Nanjangud Toll Plaza: Toll-less travel today as farmers stage protest”