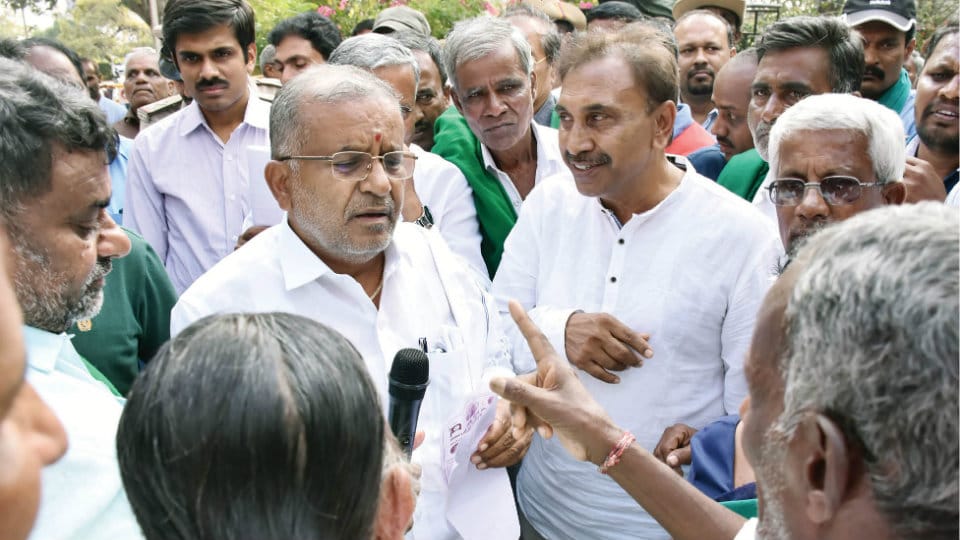 Non-payment of money for milk procured

Mysuru/Mysore: Farmers of Yachegowdanahalli in the taluk reportedly fumed at MLA G.T. Devegowda near DC’s office here yesterday alleging that the money for milk supplied to the dairy for the last four months had not been paid.

The farmers were agitating near DC’s office for the last five days seeking shifting of the 440kv High Tension power line being drawn to the power grid station. District Minister V. Somanna and Devegowda arrived at the spot and assured the farmers that a meeting would be held on Jan.11 and decide about the HT cable issue which prompted the farmers to temporarily withdraw the stir.

When Devegowda was about to leave, over 20 farmers including women surrounded him and demanded money for the milk supplied to Yachegowdanahalli Milk Producers Co-operative Society. They alleged that the society dairy staff claim that the money has not been released from Mysuru-Chamarajanagar District Central Co-operative (MCDCC) Bank which incidentally is headed by G.D. Harish Gowda, son of Devegowda.

The farmers voicing their anger questioned the rationale behind the inordinate delay in payment by MCDCC Bank when the bank is headed by the MLA’s son. They said that they had voted the MLA to power and fumed at what they got in return. When the farmers’ anger began mounting up with the farmers shouting slogans against Devegowda, the equally disturbed and angered MLA pretended ignorance about the problem and assured to discuss the matter on the coming Monday and disburse the amount due. Not budging, the farmers demanded the payment.

When the tension began to escalate, the Police intervened, managed to bundle off Devegowda in the District Minister’s car. But the determined farmers voiced their anger surrounding the car.

MCDCC Bank Chairman G.D. Harish Gowda has claimed that the non-payment of money for the milk supplied is an internal problem of the Yachegowdanahalli Milk Producers Co-operative Society.

Speaking to Star of Mysore,  Harish Gowda claimed that there was a misunderstanding between the President and Secretary of the Village Society Dairy on account of which Gungral Chatra MCDCC Bank Branch Manager had not released the amount. He said that he had spoken to the Dairy President and had suggested to provide an authorisation letter to the Supervisor so that the money could be released by MCDCC Bank. He reiterated that it is an internal problem of  the society and the Bank cannot be blamed. He assured to do the needful.