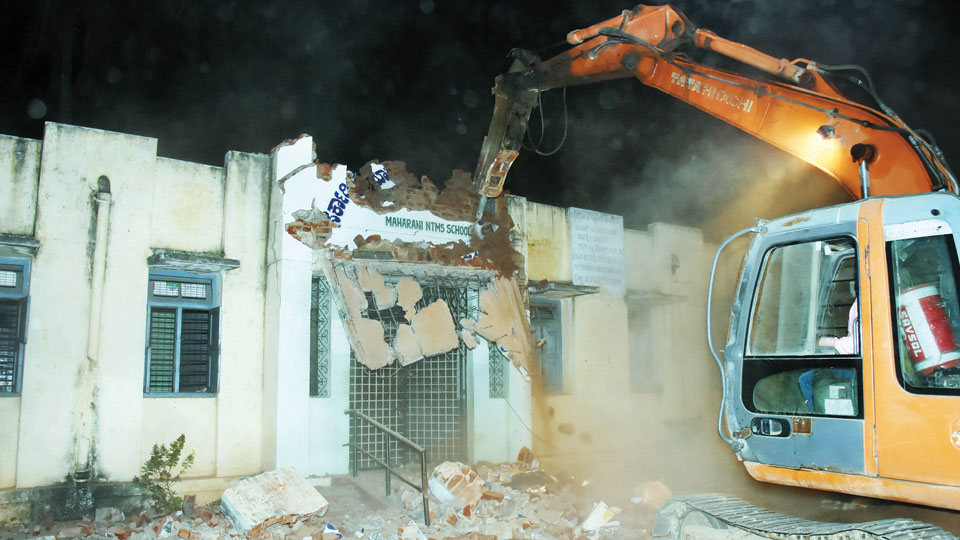 Authorities implement the order nine years after it was issued

Mysore/Mysuru: Following a Government Order, the Maharani NTM (New Type Model) School on Narayana Shastri Road (N.S. Road) in the heart of the city was demolished by authorities in an overnight operation to pave way for the construction of Vivekananda Memorial and Cultural Youth Centre.

On learning about the demolition of the building, a few members of ‘Save NTM School Samiti’ arrived at the spot and opposed the demolition. But they were prevented from getting close to the school building, and they ended up having a verbal duel with the Police.

The demolition began at about 11.30 pm and was completed in just an hour. Four Hitachi and three JCB earth-movers were deployed for the operation.

More than 200 Police personnel led by DCP Geetha Prasanna and ACP Shashidhar provided security. Barricades were set up all around the spot.

It may be recalled that the Government, in an order issued on Jan. 9, 2013 (Order No. E.D./771/LIB  2012/13), had handed over the said property to Sri Ramakrishna Ashram, Mysuru, for the construction of Swami Vivekananda Memorial and Cultural Youth Centre (Viveka Smaraka) at the site.

The Government, in its order, had sanctioned NTM School premises and the adjacent BRC building and premises on N.S. Road, to Mysuru Ramakrishna Ashram and Mission, for the construction of the Memorial and also a Youth Centre.

After the Government Order, on Jan. 7, 2022, the authorities had directed the NTM School to be shifted to a building located on the premises of Maharani Teacher Training Institute close by.

As a follow-up, the Commissioner of Public Instruction had issued a reminder on Jan. 29, 2022 asking the authorities to initiate action in this regard.

The authorities then shifted the furniture, stationery and other articles from the NTM School to the Government-run Maharani Teacher Training Institute located opposite the NTM School on N.S. Road on Feb. 3. Since Feb. 4, the NTM School, with very few students, has been functioning from this new premises. In Jan. 2013, after the Government ordered that the NTM School premises be handed over to Ramakrishna Ashram, Mysuru, several organisations of the city, supported by some activists and political leaders, started to stage a series of demonstrations and rallies against the Government’s action. The Government and authorities have put a decisive end to the row by implementing the order.