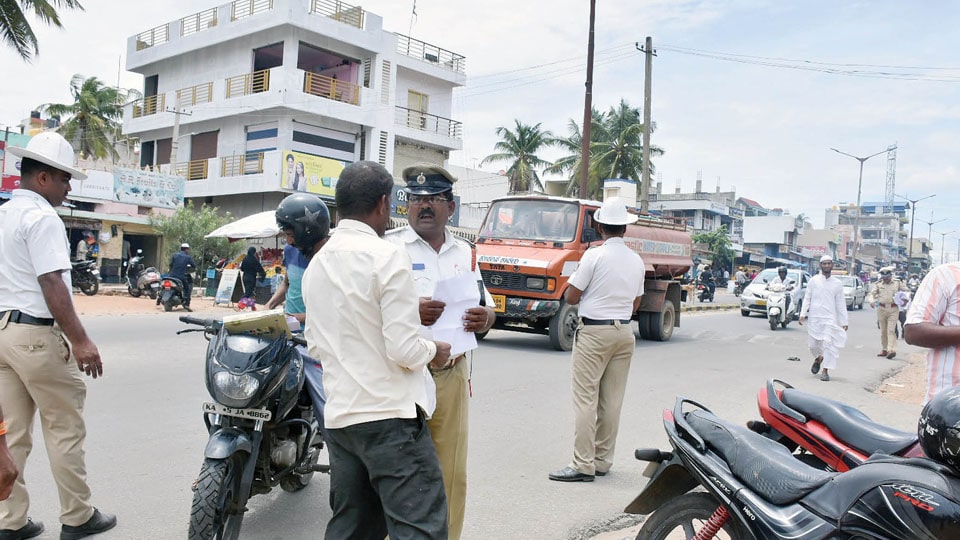 Penalties for almost all traffic offences and vehicle document lapses have been revised upwards by our Government with the good intention of hammering some sense, albeit through sheer fear, into our traffic offenders who seem to only be increasing day after day.  We all know that driving on our roads is no easy task even for the bravest of us, let alone the faint hearted.

All our claims of having arrived where we need to be to call ourselves a developed and technologically advanced nation, simply fall flat when it comes to the question of how well we behave on our roads as vehicle users or even pedestrians. In these two areas we continue to remain in the dark ages of antiquity and senselessness.

Rabindranath Tagore in his immortal poem ‘Gitanjali’ which is undoubtedly the best prayer for all of us, has prayed for some of the most essential things for our nation to become great. I feel that he should also have included the phrase “Where the precious life of the poor man on the street is not wiped away from the face of this earth by every passing bus or truck” to make it complete!

Our Government perhaps wants to bridge this gap now by making traffic offenders pay a lot more for every one of their wrong-doings. Yes, deterrent fines do have a place in any attempt to reform recalcitrant offenders. But I do not think that this measure alone will make our roads completely safe unless we take a re-look at many other factors that make them unsafe.

Today, penalising two-wheeler riders for not wearing helmets and four-wheeler users for not using seat belts seems to have become the main reason why we are spending tax-payers’ money on our Traffic Police force. This is the state of affairs across the length and breadth of our country. But what our authorities are missing out is the fact that it is not these two offences which are responsible for the greatest number of fatalities on our roads. These two lapses no doubt take the lives of the vehicle users themselves but they are not the mass killers and more importantly they are not at all responsible for endangering the lives of other road-users.

The biggest mass killers next to our bad roads are over-speeding, badly parked vehicles, trucks, tractors and trailers without rear lights and reflectors which are both plying or simply parked on our roads, over-laden buses, tempos and autos, goods vehicles sans safe seats which are routinely used for transporting people like cattle  and two-wheelers sometimes carrying up to six people with one child on the handle bar, one on the fuel tank and two sandwiched between the two parents!

Yes, we Indians do see these scenes day in and day out on our roads and very often this is one of the things that make India ‘photogenic’ to foreign tourists!

Now with almost all our major inter-city and inter-State Highways having become multi-lane and, therefore, unidirectional, head-on collisions are thankfully becoming rarer and rarer. The maximum number of lives being lost on our roads is because of over-speeding and rear end collisions with dangerously parked vehicles without rear lights or reflectors. Yet we find that almost half the trucks and all the tractors and trailers plying on our roads are without rear lights and easy-to-see reflectors.

Today while one half of our Traffic Police force is deployed to control traffic in our cities, the other half is found flagging down motorcyclists without helmets and car drivers not using seat belts within city limits just to send impressive report cards of fines collected to the Government. Instead of this silly ‘coin-collecting’ exercise, if this force is deployed to effectively scan our Highways for the dozens of other more dangerous offences they would be doing real life-saving work where it is most needed. Their first priority should be to make the lives of helpless passengers and bystanders safer before educating vehicle users who are themselves not keen on ensuring their own safety by using helmets and seat belts.

Coming to the question of Traffic Policemen stopping vehicles to check the validity of documents, I feel this can largely be avoided by having an intelligent system which alerts the drivers, owners and also the Police Department about their expiry dates as in other developed countries. A properly maintained, smart surveillance system which we already have in most of our cities, can very easily alert the Police if a vehicle with expired permit is found plying on the roads. There will then be no need for Traffic Police to put themselves and road users too to inconvenience by stopping vehicles on busy roads.

The most important requirement within our cities is to ensure that signal-jumpers and lane trespassers do not make life unsafe and miserable for other road-users. The most serious traffic offences anywhere else in the world are over-speeding and driving through a red light. They are the ones which are immediately noticed by Police surveillance systems and which are practically unpardonable. But in our country these two are among the commonest, offering the trespassers their greatest thrill, practically at no cost.

In almost all our cities, drivers think that all left turns are free turns with the red light having no meaning. This makes things difficult for any law-abiding persons who decide to wait for the green light if they happen to be parked in front of aggressive left-bound drivers who make the mandatory wait a real hell by their incessant honking and cursing.

Policemen deployed at intersections who see people trapped in this situation simply do not intervene to help. The situation has become so bad now that I think the best option is to make all left turns free just to make things easy for both the good and the bad drivers.

Unlike in the rest of the world, in our country traffic lights seem to have a completely different meaning altogether. Here a green light means ‘GO’, an orange light means ‘GO QUICKLY’ while a red light means ‘KEEP GOING IF THERE IS NO POLICEMAN AROUND’! I wonder when this concept is going to change!