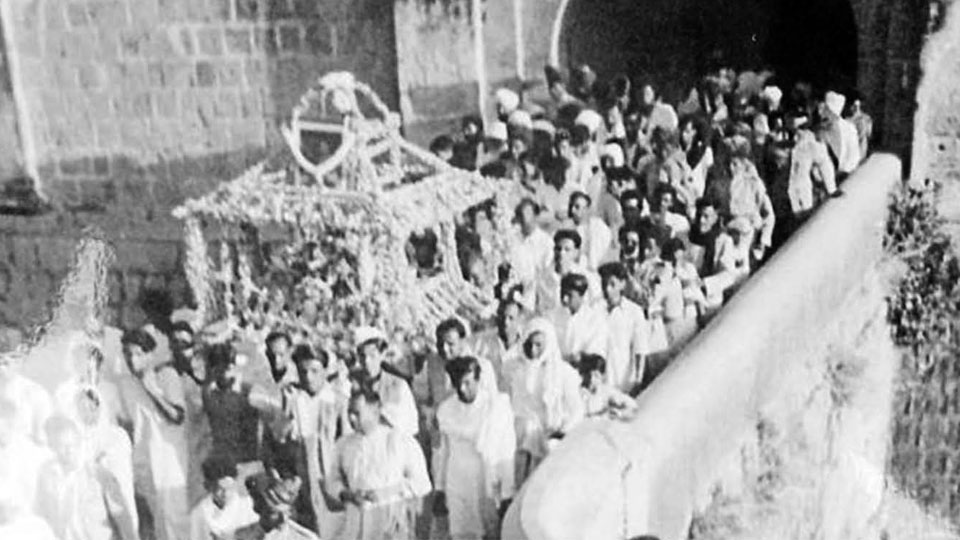 The Past is over, you cannot get back to it. Live each day anew,” was written in the Autograph Books of our school days. In these days of uncertainty and menace, it is a comfort to reach back in memory to the lovely old Mysore of my childhood and briefly revisit the Past.

Some lore of old Mysore [Mysuru now] came to me from stories told by Mukta, my mother, who was a great raconteur. Other memories were images from my own experiences; my first visit, as a very small girl, to the Temple on Chamundi Betta, being one of them. My father, M. Venkatesh, took me in his car on the winding, uphill road. There were drifts of mist on the hillside. If lucky, one saw monkeys playing on the rocks or even a mongoose.

There were no shops lining the path to the temple then, only vendors with puja materials in baskets for devotees to buy. The steep vestibule leading to the sanctum acted as a flue. A chill breeze whistled up it and the stone steps were icy cold to our bare feet. There were no metal barricades around the sanctum and no crowds either. I was asked later if I had seen the glowing ruby on the idol. I had not, but seeing the lamps, floral decorations and smelling the incense remained in the memory.

On another occasion, I accompanied father to an office building. Outside, boys were playing a ball game. While only the top of the head was tonsured, the hair at the back was braided into a plait. When I see Chinese Kung Fu actors on television, I am reminded of those young boys. Father told me that he had a similar hairdo as a ten-year- old boy [probably in 1900] and disliked it enough to sneak off to a barber, wheedling him to cut it off. His strict father punished him but accepted his shorn state later.

Life continued in an even tenor when my parents moved from their first home in Lakshmipuram to a Railway Bungalow on KRS Road where I was born in 1938. Freshly baked bread from Hamza Bakery on Sayyaji Rao Road was delivered to the house in a big wickerwork basket balanced on the carrier of a bicycle. The dhobi came with his donkey to carry away soiled laundry on panniers on its back. Butter from Halladakeri was bought in a donne [banana fibre container] which mother accepted. She was famous for sanitising vegetables and fruit in “Pinky” [water coloured a light pink with some crystals of Potassium permanganate]. The butter passed muster as it was melted to make ghee and boiled till the house was redolent with the smell. Drumstick leaves were added at the end and made a crispy snack.

Some shopping had to be done in the city. Shivarampet stocked wholesale goods like rice, dals and even onions.  A strong smell of coffee wafted from father’s favourite shop where he bought powdered coffee.

Sayyaji Rao Road had different merchandise. Art and school materials were bought at R. Krishnaswamy. Ali Brothers sold general goods, dolls and round chocolates covered in glittery paper. By the arched entrance to Devaraja Market was a toy shop, next to the Rajputana Trading Company where father shopped while I was transfixed by the toys and spinning tops or “bugri”, pear shaped and made of wood. The rounded tops were decorated with bands of colour [Channapatna lacquer],  the wooden part was fluted, to fit a jute string around it. The bugris are still available but now are sometimes used by adults as a power game to bet on.

I also had several stiff wooden figures, called “Marapachi Bommai” in Tamil, from the same shop. The trees along Sayyaji Rao Road were home to parakeets and at sundown, shrill screeches filled the air as the birds fought for perches; so different from the bedraggled parakeets of the soothsayers, only let out of their cages to pick fortune cards for their clients.

Instead of “over-the-counter” medicines, our doctors wrote prescriptions which were “dispensed” by a “Compounder” and filled in green glass bottles at T.C. Nataraj, the Chemist. The dosage was graded on the glass bottles in raised lines. Mukta’s Potassium permanganate was also available here. Across the road was Bombay Indra Bhavan, closed these many years, whose “Tuppada Dosais” were fit for a royal palate.

My father retired in 1947. We moved to a rented house called Sri Cauvery [torn down long ago] on the outskirts of Yadavagiri while our own house was being built. Those were tempestuous days with communal riots in North India while our  town was both peaceful and secure. The radio was a constant companion on which we heard of the assassination of Mahatma Gandhi.

Then on 12th February 1948, came news that Gandhiji’s ashes were to be immersed in sacred rivers and in the Kaveri [Cauvery] at Paschimavahini. Father was very keen to see this historic event. His old Green Standard sputtered into silence when he tried to start it. He cajoled a friend into lending him a ramshackle jeep. I accompanied him, excited to be in this open rugged vehicle and on the Bangalore-Mysore road; green fields and coconut trees on either side.

But soon we saw groups of people walking back and vehicles headed back to Mysore. The ceremony was over, father a dejected man, headed home. This  memory is poignant  because Gandhiji’s Death Anniversary was on 30th January 2022.

It was a new era for our country, for us. I recall the tumult of those days, India emerging strong from those searing times, Mysore retained its innate beauty… and still does. Our iconic and mystic Chamundi Betta, opaline in the sunshine, presides benignly over the city, a continuity in time and space.

9 COMMENTS ON THIS POST To “Old Mysore… A Fond Memory”