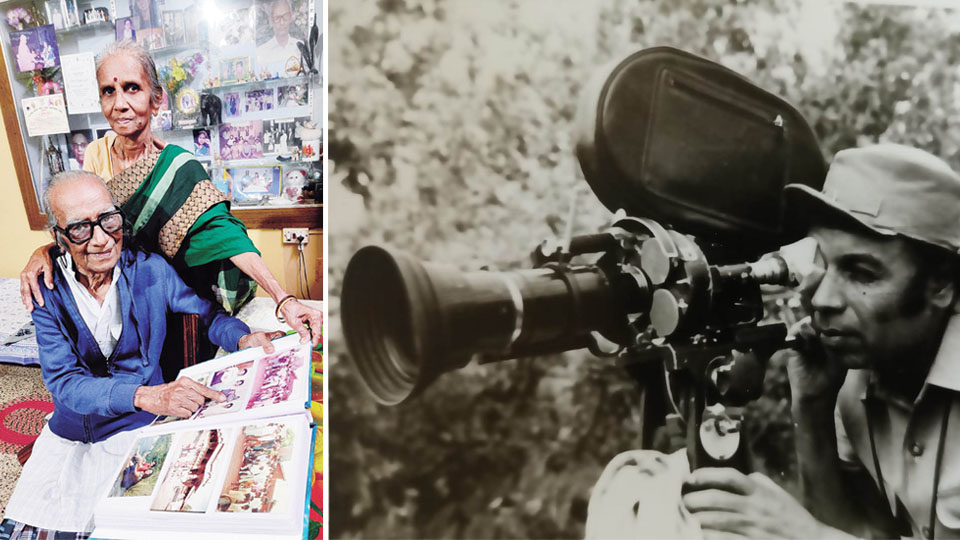 Film-making requires a wide array of professionals to work in harmony as they bring a narrative to life on-screen. A film’s cameraman is responsible for operating the camera and capturing the film’s footage. Cinematography, the art and technology of motion-picture photography involves such techniques as the general composition of a scene; the lighting of the set or location; the choice of cameras, lenses, filters and film stock; the camera angle and movements and the integration of any special effects.

They know which cameras to use in which conditions and consider the composition, framing and movement of a shot. Camera operators with a lot of experience have their own editorial eye and often offer up shots and ideas to the producer/ director.

Meet 82-year-old M.S. Rajappan of Mysuru, who has shot nearly 400 feature films and has produced about 350 advertising shorts and documentaries. He has also shot a documentary of late writer R.K. Narayan for the BBC in 1989 and a brief interview of President V.V. Giri with World Literature Crusade President Dr. Jack McAlister, which was shot at Rashtrapati Bhavan in 1970.

Now, Rajappan stays at his humble abode in J.P. Nagar, Mysuru and leads a quiet life with his wife Sathyaprema, a retired staff of JSS College. Sathyaprema is the daughter of late B. Mallaraje Urs, who was an engineer and an award-winning author and is the niece of educationist late Jayalakshammani, who was the Vice-Chancellor of Karnatak University, Dharwad (February 1974-January 1975).

Rajappan’s only daughter M.R. Radika (Chitra) is married to M.C. Rajanikanthraj Urs, Sales Manager at Hewlett Packard (HP), In-Charge of South-East Asian Countries, based in Singapore. The couple is blessed with a daughter Lakshmi.

Recalling his journey as a cameraman, Rajappan told Star of Mysore that he was born to an agrarian family of Mudavesseril in Kumbalangi village near Kochi in Kerala, where he completed his school and college education.

“As I had a passion for film journalism, I started writing articles on contemporary cinemas and many journals began to publish my articles which were widely acclaimed. Well-known film director Ramu Kariat encouraged me and on his advice, I decided to shoot in any motion picture studio, which led me to Premier Studios in Mysore,” Rajappan recalled.

Though Rajappan could not recollect many incidents during his career due to age factor, he said there were two or three incidents that he could never forget.

During his first assignment as an operative cameraman for Tamil movie ‘Yanai Pagan,’ a jungle thriller, with B. Saroja Devi and Uday Kumar in lead roles, which was shot in Ooty and dense forests of Mudumalai, the photography director had asked him to take shots of wildlife in its habitat. After mounting the camera on an elephant’s back, he along with his assistant and the mahout set out into the forest and began shooting.

“As we were moving to shoot a big herd of bison, all of a sudden a lone tusker charged at us and our elephant began to shake vigorously, which could have resulted in us falling down from the elephant. But fortunately, there was a trench with wild growth inside at a few feet of distance from us and the tusker stopped in front of it. I saw death face-to-face for the first time,” he said.

READ ALSO  No Jawa revving on city roads this year

In another incident, during the shooting of the Kannada movie ‘Hoysala’, directed by veteran director C.V. Shivashankar, the location of the shooting was a dilapidated temple with statues of hooded snakes, which was covered with creepers and bushes in the dense forest near Mudigere in Chikkamagalur.

“When I was adjusting the camera, a snake with its hood open appeared all of a sudden and came near the camera. The crew including the director ran away and stood at a distance calling me to leave the camera and run away. But to my surprise, within seconds, a dozen snakes surrounded my camera and I was still holding the camera handle out of fear and not knowing what to do. Fortunately, all the snakes retreated after holding a sort of peaceful protest and the shooting for the day was cancelled,” Rajappan added.

In 1965, Rajappan started his own firm ‘Movie International’ and became a pioneer in the field of production of advertising films and documentaries. The then owner of Premier Studios, M.N. Basavarajaiah had helped Rajappan. “Basavarajaiah even stood as a guarantee for the        advance payment from clients,” he recalled.

“Though I am a cinematographer and short filmmaker, I also worked as a freelance film journalist for many years. I worked as a Mysore correspondent of ‘Movie Land,’ a popular English weekly published from Chennai. I was also elected as the President of Mysore City Film Journalists Association for two terms,” he signed off.