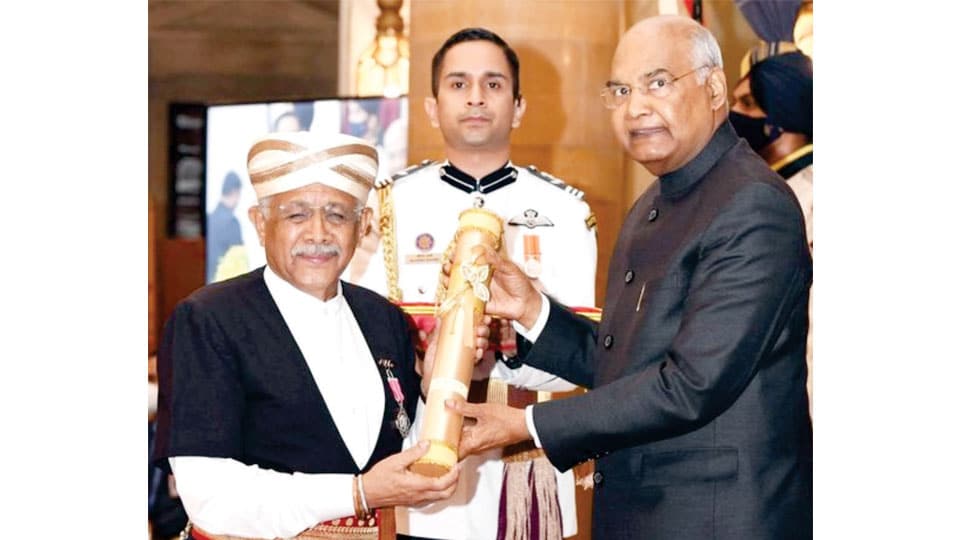 Mysore/Mysuru: Olympian M.P. Ganesh, who captained the Indian hockey team and was honoured with the Padma Shri by President Ram Nath Kovind, is Coorg Person of the Year-2021.

Mollera Poovaiah Ganesh, hailing from Suntikoppa in Kodagu district, was selected ‘Coorg Person of the Year’ in a poll conducted by www.coorgtourisminfo.com, Kodagu’s first news portal, promoted by journalist and author P.T. Bopanna.

There may not be many such extraordinary instances of a person running away from home to join the Army ending up at the Rashtrapati Bhavan to receive the coveted Padma Shri. Ganesh was also conferred the Arjuna award in 1973.

Ganesh, born on July 8, 1946, was an achiever both on and off the field. Though he ran away from home without informing his parents to join the Army after writing his matriculation examination, Ganesh managed to complete his MA in English, diploma in sports coaching from the National Institute of Sports, Patiala and Ph.D in Physical Education.

Although Ganesh joined the Army to fulfil his childhood dream of becoming a football player, he failed to make it to the football team. Then he went for the hockey selection where he was successful. This goes to prove the adage that “hockey is in the blood of the Kodavas.”

Ganesh represented the Services (Defence Services) in the National Hockey Championships from 1966 to 1973.

Ganesh, a right winger, twice represented the country in the Asian Games, first in 1970 in Bangkok and then in 1974 in Tehran. He was in the Indian team that won Bronze at the first World Cup in Barcelona in 1971 and captained the team that won Silver at the next World Cup in Amsterdam in 1973.  He also played for World XI in 1972.  Ganesh last played for India in 1974, as his career was cut short following a knee injury.

His most disappointing moment probably was during the finals of the World Cup in Amsterdam when India lost to Netherlands in the finals, after missing a penalty stroke.

Ganesh had a long reign as a sports administrator. He served as Director of Sports Authority of India (South) and in 2017 took charge as the High Performance Director and CEO of the National Hockey Academy in Delhi.

He is married to Keethiyanda Prema and their only son Ayyappa passed away when he was 20 years old due to a rare medical condition.

P. Shrividya Somanna, who helped Ganesh to put together his autobiography ‘Living The Dream: My Autobiography’ told this reporter that Ganesh’s wife Prema was instrumental in motivating him to pursue his higher education.