Home » News » On the trail of giant tubers 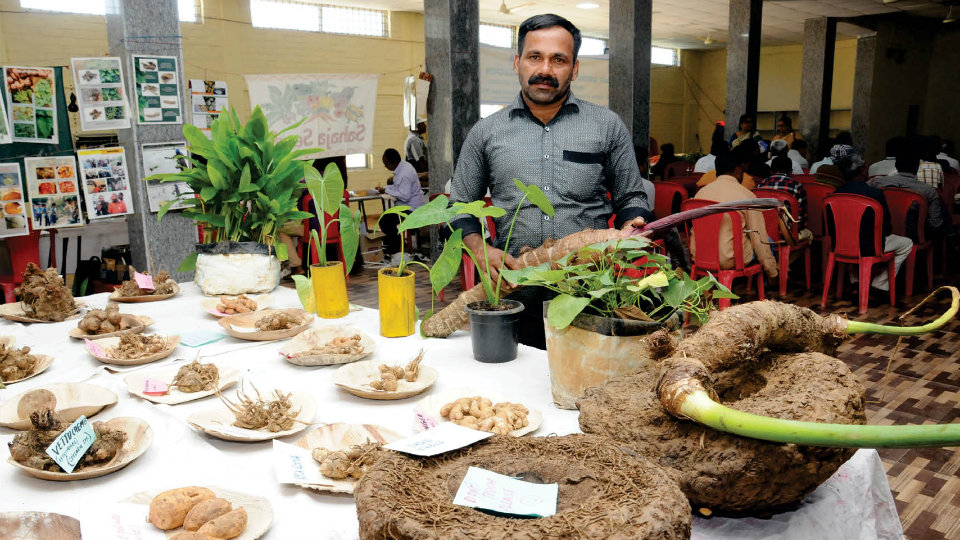 On the trail of giant tubers

Mysuru:  For the first time, a two-day ‘Roots and Tuber Mela’ began in city this morning. The Mela saw a huge turnout of farmers, buyers, students, organic business firms, scientists and agriculture experts. They thronged the Curzon Park, where the Mela was organised, to study tuber cultivation and different varieties of tubers.

The Mela was organised by Sahaja Samrudha, in collaboration with the Department of Horticulture and University of Horticultural Sciences, Bagalkot.

The focus of this Mela was to sensitise the urban community towards the benefits of tuber consumption and explore more value addition and include them into cultivation.

More than 50 varieties of tubers were on display including those grown by the Kunbi community. According to organisers, the locals grew tubers for their own consumption and they never thought that it can be marketed. “We thought it would be a good idea to provide them a platform to market their crops. If we increase the income of the people living inside the forest areas, it will help them to reduce dependency on the forest,” said organisers.

The Mela was inaugurated by N.M. Shaji of Kedaram Tuber Conservation at Manandavadi in Wayanad, Kerala. Shaji is a progressive farmer at Illathuvayal, near Manandavadi, and has bagged the National Plant Genome Saviour Award for lifetime engagement in protecting genetic diversity of tuber crops.

As many as 102 varieties of edible tubers, including medicinal and aromatic varieties, different species of trees, herbs, medicinal plants, and fish find a place on Shaji’s 1.5-acre plot. Shaji inaugurated the Mela by placing the tubers on the lap of two tribal women who had participated in the Mela.

Sweet and spicy dishes made out of tubers were a big hit at the Mela. The Mela was the centre of attraction for students of Ayurveda Colleges in city as many students thronged the venue to learn about those tubers that are used to make Ayurvedic medicines. Students from All India Coordinated Research Project on Tuber Crops, Dharwad, also participated in the Mela.

Organisers said that Western Ghats are particularly rich in wild relatives of tuber crops. Tuber crops not only enrich the diet of the villagers in this region, but also possess medicinal properties to cure many ailments or at least check their incidence.

In his inaugural address, Shaji said that tuber crops are cultivated by tribals and resource poor farmers from time immemorial. “Historically, tribal and rural people used to identify and collect wild tubers from the forests and develop a range of processing methods in accordance to their needs. Now, however, this knowledge is being lost as a result of the spread of modern technologies in rural and tribal areas,” he said and added that tubers and their benefits must be incorporated in the school curriculum so that children develop interest in them.