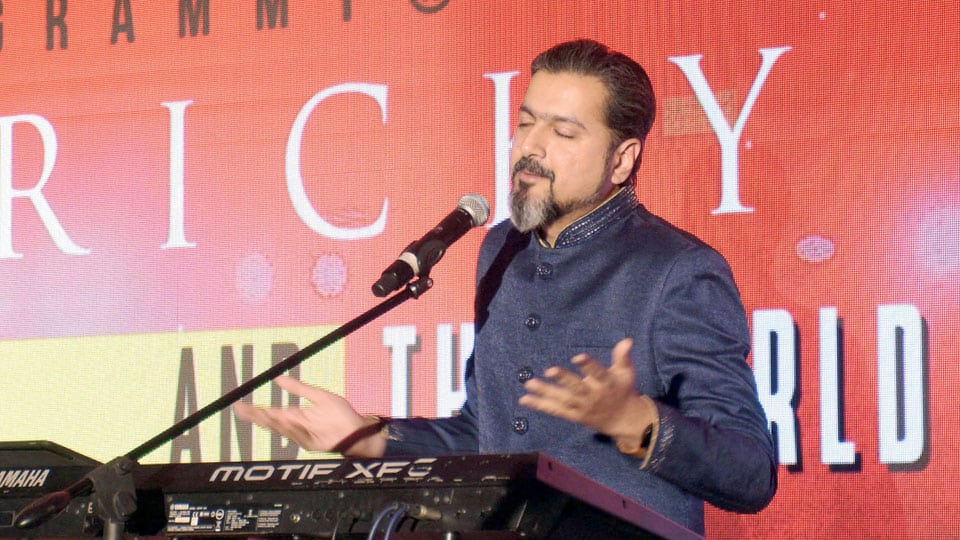 Every Indian’s heart filled with pride when Indian music composer Ricky Kej walked onto the stage along with Rock-legend Stewart Copeland to receive their Grammy Award 2022 for the Best New Age Album ‘Divine Tides’. Ricky won his first Grammy in 2015 for his album ‘Winds of Samsara’ in the Best New Age Album category. He was in the city on Saturday last to perform at the Sixth Season of the Mysuru Literature Festival. ‘Star of Mysore’ caught up with the celebrity musician.  Excerpts:

Star of Mysore (SOM): How is it winning the second Grammy?

Ricky Kej: Amazing. The award made me feel that what I was doing was right. All of my music has a strong message. I do not do pop music or film music. For me, the message is equally important as getting the music out. My music is about the environment, sustainability and positive social impact. Many do say that awards don’t mean much. But for me, an award is like a platform for doing better things, spreading out the message wider and reaching out to people.

SOM: You’ve settled down in Bengaluru, which to a large extent has been conservative when it comes to music. Has the scene changed now?

Ricky Kej: Bengaluru has now been a melting pot of cultures. It has fantastic musicians and that’s so important for me. My music is primarily Indian, with a strong fusion element. A lot of people asked me after winning the Grammy (and now my second Grammy) if I’ll move out and settle in the US or London. But for me, there are strong reasons why I want to be in Bengaluru. My favourite musicians with whom I want to record are here. Both my Grammy-winning albums have a lot of Indian musicians. And my dogs are in Bengaluru. Till they are around, Bengaluru will definitely be my home.

SOM: So you have an audience for all genres of music today?

Ricky Kej: Yes, there is space for every genre of music. Though contradictory, each form of music is completely cut off from the other too. I was talking to two young musicians in my group about ‘Mile sur mera tumhara’ and they haven’t even heard about it! I was shocked.  But later I realised they are a whole new generation and Bengaluru is filled with this new generation — who have a completely new mindset, not just about music but everything else. There’s a different set of audiences for each type of music. There’s space for everyone.

SOM: How are the music teachers responding?

Ricky Kej: Oh that’s changing a lot. Pure classical musicians too want to do fusion today. Earlier, people who taught classical did not want students to learn other genres. Now they are open to fusion music. They’ve realised that being an artiste you have to constantly push the boundaries of your art and only then will the art form survive. I believe you should create a good song — not a classical song, pop song or jazz. There are only two genres — good song and bad song. Whether a veena or an electric guitar goes into a good song it doesn’t matter, you just have to create a good song.

READ ALSO  Towards self-reliance after pandemic: A success story

SOM: Have you entered the folk space?

Ricky Kej: Yes. On the technical side, I’m working with M.D. Pallavi on a series of tracks which are Kannada folk songs basically. I’ve also reimagined folk songs with her in the past. I’ve also done two sugam sangeet songs, the reimagined version of the song ‘Amma naanu devarane’ and got Shreya Ghoshal to sing it. I’ve also composed two songs written by H.S. Venkateshmurthy

SOM: What made you think that you can create environmental awareness through your music?

Ricky Kej: I lived in an environment with trees, a wooded area in North Carolina. I’ve realised how every single creature is so important to keep the balance in the ecosystem. From 2014 onwards I decided I would not make any more commercial music but every single piece of music I make will be about things I feel strongly about. It’s not just the environment but also the social impact.

Like I do a lot of work on refugees. I’m a goodwill ambassador of the UN too. Many refugees have been made to leave their country because they are musicians. I work with a lot of such refugees, especially from Afghanistan, and Myanmar, trying to make them realise their dreams. These people are so busy trying to survive, that they really can’t pursue their passion for music. I have mentoring sessions and try to help them out.

SOM: In India, do you need awards to be recognised?

Ricky Kej: It depends on what kind of music you do. In India, if you are making Bollywood music you are well recognised and also among the Indian diaspora all over. What difference will it make to A.R. Rehman’s fame if he wins an award? He’s already reached the peak of popularity. If any Indian film musician goes abroad, he will get a houseful audience but the crowd will be the Indian diaspora there.

Ustad Zakir Hussain, Pandit Vishwa Mohan Bhat and folk musicians like Purna Das Baul from Bengal all of them have reached out to audiences that were normally not exposed to Indian music. We all know about Pandit Ravi Shankar, his awards, and his daughters. But go out on the streets and ask people to name one of his albums, they won’t be able to. That’s how much film music has overshadowed every other kind of music.

Yes, people recognised me after the awards. But I stick to my kind of music which has a message. I will do film music too if it has a strong message. I’m starting work on a Malayalam film starring Tovino Thomas, which has a very strong anti-war sentiment. South Indian films are far more conducive to social messages. Would love to work in the South Indian film industry.

SOM: How much are today’s youths environmental aware?

Ricky Kej:  They are. They need to sensitise themselves to real issues in India. Unfortunately, here most of the youths think rice is born in the supermarkets. If they go on a field trip to a paddy field, they will realise how much hard work and water goes into getting that one plate of rice. I’m sure they will waste much less. Youth activism is sort of misguided, they need to understand things correctly and look inwards. Get more sensitised to issues that in the long run harm our environment. They need to understand the cause and reaction. I think our education system has completely failed us. People in the city are living in bubbles right now. Rural India is much more environmentally conscious.

SOM: You are the Global Ambassador for Kindness…

Ricky Kej:  Yes. If you are kind to all life, the natural resources, basically all our problems are solved. Kindness is a quality that needs to be inculcated in kids, who are today sadly always in competition. Everything is about myself more than living in a community. Thankfully the National Education Policy-2020 (NEP-2020) talks about empathy, community living and sensitising yourself to issues around you. That’s what I do with UNESCO, highlighting the importance of kindness.

SOM: How have you involved children in your projects?

Ricky Kej:  There is a project called My Earth songs, where my friends Lonnie Park and Dominic and I have written 27 songs based on sustainability. We’ve taken the thematic element from the 17 sustainability goals of the UN. These songs are about sharing, gender equality, coming together, teaching them about carbon footprints, what climate action is and saving water. The songs are currently in textbooks in ICSE and CBSE. We’ve touched 11 million textbooks and translated songs to Kannada too. All songs are on myearth.com and are completely free to use. We recently had a competition of these songs in different schools.

SOM: Are the music reality shows helping in spotting talents and helping budding musicians?Ricky Kej: No. Reality shows, especially children’s shows are teaching kids to imitate others. This is detrimental. These shows are making music scenes in India far worse. Instead of teaching kids to be expressive, it’s telling them to copy. An artiste’s work should reflect his persona. But in India, that’s lacking. People aren’t expressing themselves through music. Your music needs to define you as a person but reality shows are killing that. They are asking you to be somebody else.