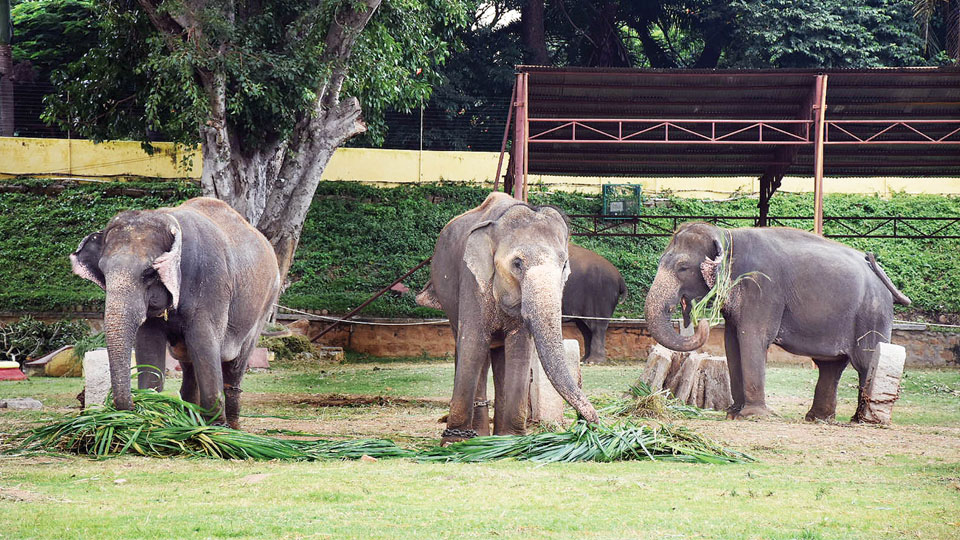 Mysore/Mysuru: Four out of six female elephants from the Mysore Palace in the age group of 27-44 years were shifted to the Elephant Care Centre at Jamnagar in Gujarat (Greens Zoological Rescue and Rehabilitation Kingdom) last night.

They are in transit now. The elephants were loaded onto four trucks and were transported to the Care Centre where they will be henceforth taken care of.

The elephants were housed inside the Palace and were being maintained by the erstwhile Mysore royal family. The elephants were rescued from Gemini Circus decades ago.  Sources said that while Seetha (36), Ruby (44), Gemini (31) and Rajeshwari (27) were shifted, Chanchala and Preethi will remain with the Palace.

As per the Wildlife Protection Act, 1972, the elephant is a protected species under Schedule I and cannot be transported unless the authorised officer does not certify the lawful process. The Act also mentions the mandatory issuance of Transit Permit (TP) by the Forest Department when an elephant is being transported from one State to another.

“We have not been informed about the shifting and we will send our staff to the Mysore Palace to check if the elephants are there or have been moved out. We will also check if permission to shift has been obtained from the Principal Chief Conservator of Forests Wildlife (PCCF),” an officer told Star of Mysore on condition of anonymity.

However, senior forest officers in Bengaluru admit that the Forest Department has to only issue a permit for transportation of the elephant. These are privately-owned animals and the Department has only to certify that the elephants are fit to travel.

“This is a private animal and the owners can shift them. But as the animal is listed under the Schedule 1, permission has to be sought from the jurisdictional Deputy Conservator of Forests (DCF) or the District Forest Officer (DFO) of the recipient State. We are not sure if permission has been sought from Gujarat. We will track the elephants and issue notices to the parties if any wildlife rules are violated,” the officer said.

The elephants were rescued from Gemini Circus decades ago following a Court order. Animal rights activists had petitioned the Court where they claimed that the elephants were being tortured in the name of entertainment. The Court had ordered the Forest Department to take over the elephants.

READ ALSO  Warming up for Winter

Following the Court order, the then scion of Mysore royal family Srikantadatta Narasimharaja Wadiyar had volunteered to take care of the elephants and accordingly, they were sent to the Palace.  The elephants were one of the main tourist attractions inside the Palace and they were being used for “elephant safari” where tourists had an opportunity to ride on them.