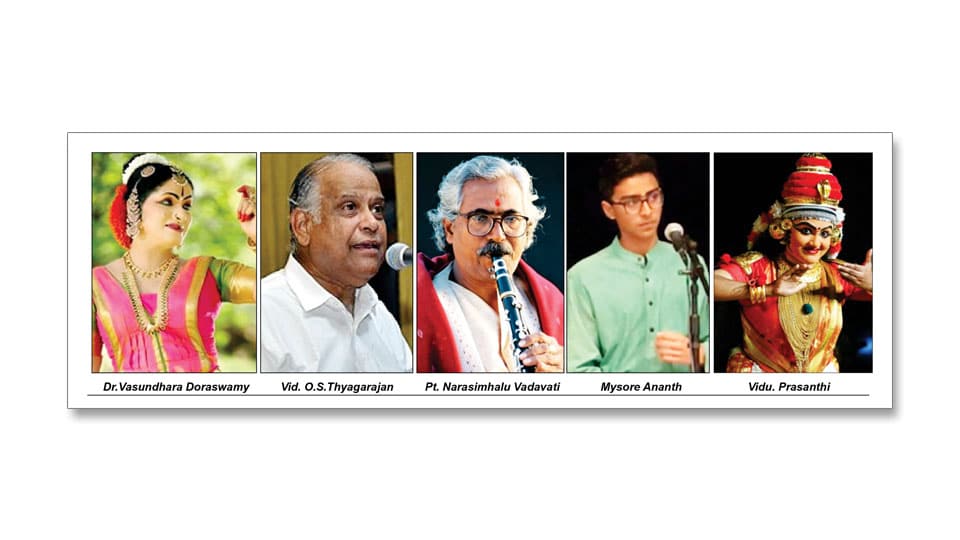 The long-awaited 33rd Edition of National-level Classical Dance and Music Festival of Veterans Parangathotsava-2019 under the aegis of Vasundhara Performing Arts Centre, Mysuru, will be held from Dec.28 to Dec. 31 between 6 pm and 9 pm at Sri Nadabrahma Sangeetha Sabha on JLB Road.

This year the festival will be inaugurated by Madhuri Thathachari of Bhramara Trust and presided by art patron K.V. Murthy. The chief guest will be H. Chennappa, Assistant Director, Kannada and Culture and  P. Krishna Kumar, Secretary, Parampare. The guests of honour will be K.S.N Prasad, Secretary, Nadabrahma Sangeetha Sabha and C.R. Himamshu, Secretary, SPVGMC Trust, Mysuru.

This year the following veterans of international repute are participating in the fest:

A danseuse par excellence,  versatile  choreographer of  repute and a venerated  Guru of Bharatanatyam Dr. Vasundhara Doraswamy, has turned very much a phenomenon in the  Indian classical dance scenario  over the past five decades and more of her career. Vasundhara is sought after Vasundhara School (Vasundara Bani).

While her performances are manifestations of the profound Terpsichorean ingenuity marked by impromptu improvisations esoteric foot work and bewitching histrionic propensities, her myriad choreographies encompassing a wide spectrum of spiritual and secular themes are striking paradigms of her inventive brilliance.

Small wonder that accolades and encomiums have been showered upon Vasundhara from an early age and she is the youngest recipient of the Karnataka Kala Tilak, the prestigious award from the Karnataka Sangeetha Nrithya Academy. Even as her academic background,  a post -graduate degree in  folklore and a  doctorate for the thesis  Bharatanatyam and Yoga  vouches for a strong  penchant for interdisciplinary approach.

Panchali noted for its singular  adoption of  Yakshagana music  to Bharatanatyam is a standing testimony  to this sensibility. She is the only choreographer so far who was has ventured to produce Saama Veda, the fountain-head  of Indian classical music in Bharatanatyam. She is also a consummate exponent of martial arts of Tang-ta and Kalaripayattu.

Born on April 3, 1947, O.S. Thyagarajan is a Karnatak Musician based in Chennai. He is the son and disciple of Sangeetha Booshanam O.V. Subrahmanyam. He learnt music from Sangeetha Kalanidhi T.M.  Thyagarajan, while Padma Bhushan Lalgudi Jayaraman provided guidance early in his career.

As A top graded artiste of the All India Radio and Doordarshan, he has been giving a large number of concerts and has been accompanied by top accompanists such as Lalgudi G. Jayaraman, M.S. Gopalakrishnan, V.V. Subrahmanyam on violin, Palghat Mani Iyer, Dr. T.K. Murthy, Palghat Raghu, Karaikudi Mani, Trichy Sankaran, Umayalpuram, Suvaraman on mridanga, G. Harishankar on Kanjira and Vikku Vinayakaram on ghata. He has worked as Dean, Faculty of Fine Arts at Annamalai University for 5 years and has trained many disciples who are active on concert circuit.

Hailing from Raichur, Karnataka Pt. Vadavati was born on Jan. 21, 1942, as the son of Buddappa, a tabla artiste and Rangamma, an accomplished singer. He has inherited the Gwalior Gharana from Pt. Panchakshari Gawai and Jaipur Gharana from Pt. Dr.Mallikarjun Mansur and Pt. Siddarama Jambaladinni. This Gayaki style is also a unique achievement on clarinet because the instrument is very difficult to master. Clarinet is primarily a western instrument and he had to accurately adopt it to Hindustani Ragaas.

READ ALSO  An evening with music...

In Clarinet Fest-2011, all performers from different parts of the world were playing in western style but Vadavati was the only artiste to play in Indian Traditional Hindustani Classical style. This was a very special and memorable experience for all attendees.

Founder of Swara Sangama Sangeetha Vidyalaya to train clarinet artistes, Pt. Vadavati has performed in all prestigious Sabhas in India and abroad. He was the Chairperson of Sangeet Nritya Academy-Karnataka for one term and his art is recognised by various Universities.

Mysore Ananth formally began learning music at the age of 6 from Sunanda Chandramouli. Expressing a keen desire to pursue advanced training, he came under the tutelage of B.U.Ganesh Prasad in 2009. He has also received guidance from Bangalore S. Shankar and is currently receiving advanced training from Kunnakudi Balamurali Krishna.

Vidushi Kalamandalam Prasanthi is a post-graduate and preparing of Ph.D in Performing Arts [Kutiyattam], a rare Sanskrit theatre from Kerala Kalamandalam Deemed University of Arts and Culture, Kerala.

She has participated in all major festivals in India and abroad to name a few: Nalanda  Nrithyothsava, Mumbai, Dubai Festival and Delhi Sanskrit Drama Festival. She has also conducted workshops, Lecture /Demonstrations in [Kutiyattam] for young artistes. She is not only a performer but also an established choreographer of repute.