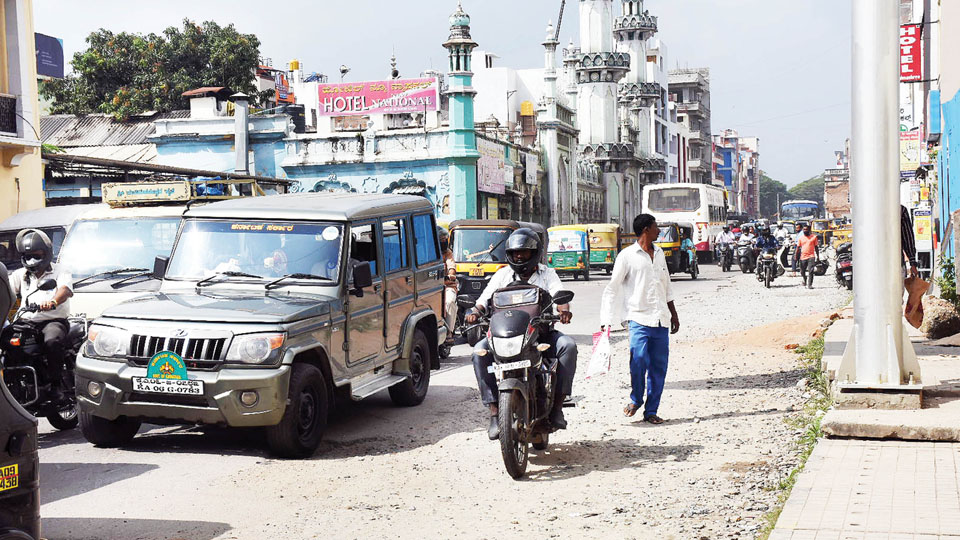 Mysore/Mysuru: All hurdles for the pending works on demolishing buildings (Nehru Circle till Government Ayurveda College) and widening the entire Irwin Road have been cleared by the Karnataka High Court.

Following the Court order, stakeholders of the Jumma Masjid have voluntarily decided to make way for the road. A part of the Masjid (wall and two minarets) will have to be demolished for the road to be widened.

Jumma Masjid was built by Nalwadi Krishnaraja Wadiyar in 1927 and is now owned and managed by Wakf Board. This morning, Masjid stakeholders and employees began clearing their valuables before demolition.

“We have decided voluntarily to give way for the road expansion and even Court has vacated the stay. The top of the minarets can easily be removed and widening process can go on smoothly. We will clear accumulated things near the boundary wall and minarets,” said a member of the Masjid Committee.

MCC Commissioner G. Lakshmikantha Reddy told Star of Mysore that since the High Court has vacated the stay, the demolition works will begin in a day or two. “All the hurdles have been cleared and now the road will be widened and the works on asphalting, laying of drains and beautification will begin,” the MCC Commissioner said.

Though over 70 percent of the demolition and widening of the road has been completed between the Arch Gate till the City Railway Station (Babu Jagjivan Ram Circle), the 650-metre stretch from Government Ayurveda College Circle till Nehru Circle (Lashkar Police Station) was the bone of contention and the same has been cleared by the Court.

Irwin Road is one of the busiest roads in the city that connects the Suburban Bus Stand to the Railway Station. As it is choked with vehicles, given the dense commercial growth along the stretch, road expansion was a difficult proposition. There were 84 properties in the stretch and 82 were demolished earlier. Now the entire road will be free from bottlenecks.