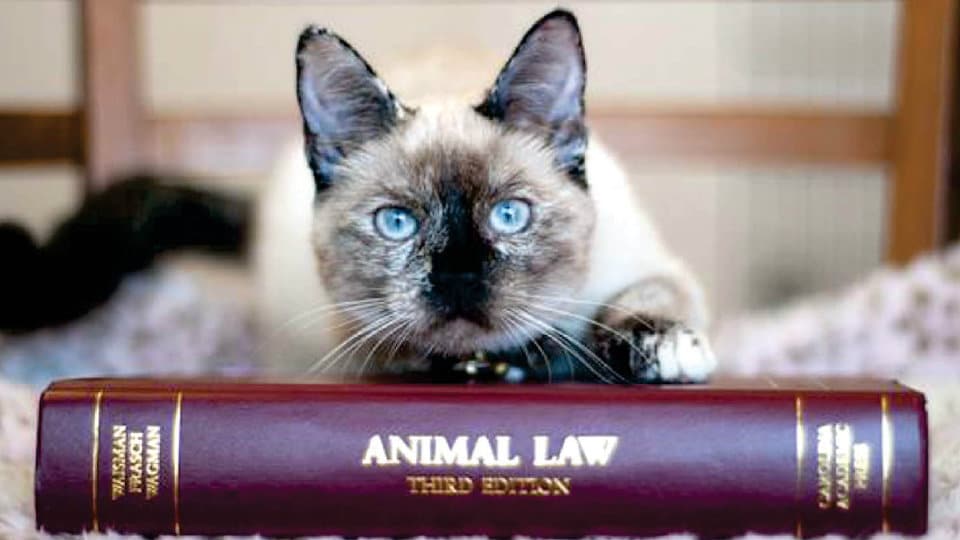 In this week’s Pet Talk,  Maneka apprises her readers about the specific laws one should know as an animal lover to protect the street animals.

What specific laws do I need to know as an animal lover to protect the street animals?

Being an Animal Lover, Activist or Feeder, in India, makes you face hostilities that will leave you frustrated and demoralised. As we commonly complain, ‘90% of Animal Welfare Work is about dealing with  hostile humans.’ Add to it the ignorance and apathy of the Police. Which is why you need to know the laws in order to protect yourself and protect the animals under your care. India happens to have one of the most comprehensive set of animal protection laws in the world. There are detailed codes of conduct governing our use and treatment of both domestic, stray and wild animals and there are many cases where these laws have been implemented. In fact, India is unique in that animal welfare is enshrined in our Constitution and every citizen is required to show compassion for all living beings.

iii. Write a letter to any local Animal Welfare NGO of repute asking them for help. Your NGO will either send a notice itself or guide you on how to send it yourself. Get a lawyer to send a legal notice.

iii. Seeking help of local NGOs and activists is highly recommended, as they have prior experience and authority in dealing with non-cooperative housing societies and Police.

vii. Knowing the law, however, doesn’t do much for an animal who is injured. Your first priority is to get him help. The punishment can wait.

viii. When you see an animal knocked over by a vehicle, get the number of the vehicle and move on to helping the animal. Check the animal for signs of life. If possible, move him or her to safety and administer life-saving first aid. Your priority is to stabilise the animal and stop bleeding, if any. Seek help from people around to catch and restrain the Dog, because an injured dog can bite in pain and stress. Use a clean cloth, or cotton wool, and press firmly against the wound to stop bleeding. If you can take the animal to a veterinarian yourself, do so. If not, call an animal welfare organisation that has an ambulance.

Feeding street dogs is the solution to many ‘problems’. It reduces suspicion, it augments trust, you earn their love and loyalty. And most importantly, it becomes easier to catch the dogs for the purpose of animal birth control and medication. It is for this reason that the Delhi High Court has specifically held, that street dogs have to be fed, and dogs feeding sites identified in all localities. The Court has also given a direction to the Delhi Police to protect animal feeders. You may also get yourself registered as a Colony Animal Caretaker from Animal Welfare Board of India, by giving your details and mailing your credentials along with the form. It is free.

If you feed strays in your locality, the AWBI and the Courts have some guidelines for you too. Make sure you follow them to the greatest extent possible, keeping in mind the benefit of the animals as well as people.

What does a woodpecker eat?

How do birds urinate?

To make them more lightweight, most birds do not have bladders to store urine. Rather than producing liquid urine to get rid of wastes, they produce a white, pasty substance. However, while an ostrich does not have a bladder like a mammalian bladder, it is unique among birds, because it does have a complete separation of faeces and urine.

What are some symptoms of congestive heart failure in dogs?

Tiring easily, a decrease in activity level and sporadic coughing when a dog is excited, all can indicate the beginnings of congestive heart failure. As the body becomes unable to compensate for the reduced function of the heart, you may observe a lack of appetite, rapid breathing, abdominal swelling and weight loss. In late stages, laboured breathing, fainting and a rapid, irregular pulse may occur. Continued problems become more indicative of the disease. A backup of fluid in the lungs frequently causes coughing. When the fluid accumulates rapidly in the small airways, the dog may cough up a red fluid. This is indicative of failure of the left ventricle. When the fluid builds up in the abdomen, legs and chest cavity, failure of the right ventricle has occurred. Some forms of heart disease are curable if treated before the heart is damaged. Heartworms, bacterial endocarditis and congenital heart disease are all treatable, if identified early. A low-salt diet, restricted exercise and medications to improve heart function, are all suggested treatments for congestive heart failure. Congestive heart failure is diagnosed using chest X-rays, blood and urine tests, an electrocardiogram or an  ultrasound examination.

What would cause my cat to lose his voice?

Identifying a definitive cause of voice loss in cats is often difficult or impossible. An upper respiratory tract infection, usually caused by the herpes virus or the feline calicivirus, is the most frequent reason a cat loses its voice. Sneezing and discharge from the eyes and nose accompany the voice loss in these cases. Vocal cord polyps and benign, or malignant, tumours can cause hoarseness, voice changes and voice loss in cats. Coughing, sneezing and repeated ear infections often occur concurrently. Medications and surgery can treat these conditions. Laryngeal paralysis, in which the larynx no longer works correctly, causes breathing and voice problems in cats. Any change in a feline’s voice requires veterinary evaluation. In addition to an oral exam, X-rays and an endoscopic examination may be necessary to check for abnormalities.