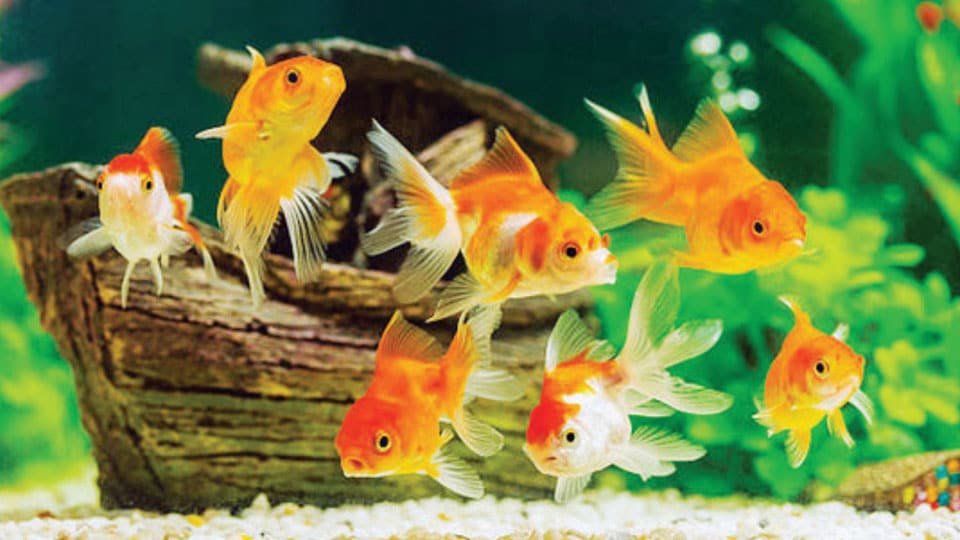 In this week’s Pet Talk, Maneka talks about fish and aquarium. Also gives tips on how to stop cats from chewing wires?

Do fish sleep with their eyes open?

Fish sleep is different from human sleep. Humans sleep to get a period of rest. For fish, sleep means a period of lowered activity. Sleep is associated with closing of eyelids, but fishes don’t close their eyes because they don’t have eyelids (except for some sharks). There are a number of factors that can be looked at to determine a fish’s sleep which include: prolonged inactivity, a particular resting posture, alternation with activity in 24 hours and high arousal thresholds. While a fish rests, it may hover around a particular place for a long time. This is to keep a constant flow of water moving past their gills to maintain a proper oxygen level in their bodies.

Yes, many fish do make sounds underwater. The noises have been categorised as grunts, squeaks, knocks, drumming, tapping, booming, croaking, growling and snorting. Sounds may be intentionally produced as signals to predators or competitors, to attract mates, or as a response to fright. The majority of sounds produced by fishes are of low frequency and are not audible to humans.

Why does the water get cloudy in the aquarium and what should I do about it?

The water in an aquarium can get cloudy in many circumstances: If the tank is new, and has had a lot of fish in it for a few days, bacteria and waste levels will not be balanced, often resulting in milky white cloudy aquarium water. Insufficiently washed gravel can cause the cloudiness. Draining the tank and rinsing the gravel, until the water runs clear, will resolve the problem.

If washing the gravel doesn’t solve the problem, the dissolved constituents, such as phosphates, silicates, could be the cause. In such cases, you’ll likely find that the pH is high (alkaline). Treating water with conditioners will often resolve the problem.

What does rapid breathing in a fish mean?

The primary cause of a tropical fish appearing to breathe fast is because of there being not enough oxygen in the water. So, they therefore have to use their mouths to suck in oxygen rather than take it in through their gills. Some de-chlorinators can drop the oxygen levels in the tank.

Changing the water quickly, or changing too much at once without following a slow refilling method, can change the temperature or pH and shock the fish causing them to breathe rapidly. Overstocked fish tank can also cause lack of oxygen, so it’s best if you limit the number of fishes in your tank by re-homing to another tank.

Do fish chew their food?

Fishes do not chew food in the way humans do. While humans use teeth to grind their food into smaller pieces, the carnivorous fishes use their sharp teeth to capture the prey and then swallow it whole. Bottom dwellers, such as rays, use their large flat teeth to grind the shellfish they consume. Herbivorous fishes don’t necessarily have jaw teeth, but have tooth-like structures, known as pharyngeal teeth, in their throat to crush or grind the food.

How do you stop cats from chewing wires?

Cats’ chewing on wires can be out of curiosity, during teething, out of boredom or even because of a nutrient deficiency. Chewing on cords is a dangerous activity, as it can lead to choking or even death from electrocution. Here are a few tips, to prevent your cats from chewing wires:

Wrap the wires in rubber, or smear them with a citrus scent that will make cats dislike the taste. Prevent the cats from getting access to the wires. Try putting all the loose wiring of the house out of reach of the cat. If this is not possible, cover the wires with a double sided sticky tape.

How should you trim your cat’s nails?

Trimming a cat’s nails can be an exhausting activity for both the cat and its human. Improper trimming can lead to blood loss, hence it is important that you form a proper routine with your cat. Introduce the clipper to a kitten so that it is habituated to having its nails trimmed from a small age. But you can start with an adult cat too by being patient. First try to get the cat accustomed to the idea of sitting on your lap in a comfortable position. Make sure the cat is relaxed when you pick it up. If it’s possible, sit around the window so that the cat is distracted by watching what’s outside. If it’s not possible, then lure your cat into your lap with treats so that it associates that place with positive experiences.

After the cat is comfortable gently squeeze the paw to extend the nails out. If the cat takes back its paw, don’t show anger but try again later. Remember to keep rewarding every positive experience. When the cat finally allows you to hold her paw, squeeze out the nails and quickly snip only the white part of the nail. The pink part, known as the ‘quick’, is sensitive and has the nerves and blood vessels, and cutting it will hurt the cat and cause bleeding. Make sure to use a good quality snipper and try and finish the trimming as soon as possible without hurting the cat.