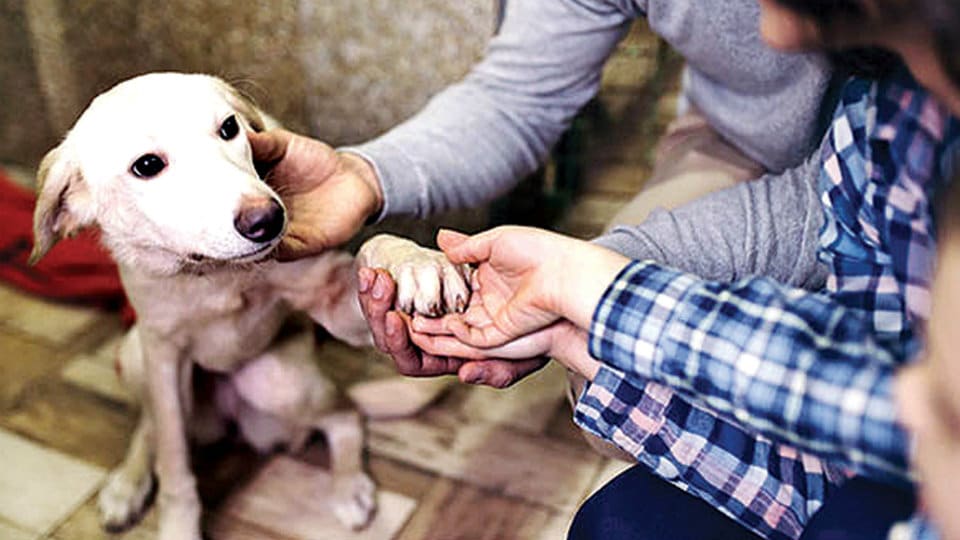 In this week’s Pet Talk, Maneka explains how dog adoption can benefit in one’s individual development

My dog is suddenly very hungry all the time. Can there be a problem?

Serious diseases can cause excessive hunger in dogs. Diabetes mellitus is a disease that causes your dog to either have an absolute shortage of insulin (type i), or an incorrect response from the cells to the insulin that is being produced (type ii). Both of these conditions will prevent your dog’s muscles and organs from converting glucose to energy, and will result in excessive amounts of glucose in the blood.

Your dog is not properly absorbing the nutrients of his food due to a gastrointestinal problem such as Inflammatory Bowel Disease (IBD). This in turn often leads to weight loss and increased appetite.

There are several types of gastrointestinal cancers that can afflict your dog’s stomach and intestines with tumours, including adenocarcinoma and leiomyosarcoma.

As your dog gets older, he may undergo behavioural or physical problems — such as the diseases already discussed here — which in turn can cause issues such as increased appetite.

My dog has diarrhoea. What are the possible causes and treatments?

Treatment: • Withholding food for 12 to 24 hours, and providing water in small amounts frequently, can clear the cause of the upset and allow the gastrointestinal tract to settle; • Rice water, white rice, pumpkin, yogurt, probiotics, boiled potatoes and cottage cheese can be given. After a fast, food is usually introduced slowly, and many people start with binders, which can normalise stool consistency.

Other physical symptoms, such as lethargy, fever, vomiting, dry, tacky or pale gums, or weakness. This calls for a vet visit.

My neighbour is harassing me for feeding dogs and other strays. What should I do?

This amounts to criminal intimidation under Section 503 of the Indian Penal Code (IPC). It is a fundamental duty of all citizens of India to be compassionate towards animals, according to Article 51g.

First of all, you should gather evidence such as witness statements and voice recordings.

In the second step, you should register an FIR with your local Police Station. An FIR should contain all the necessary details of your complaint. After that, the Police will visit your neighbour and locality and investigate the matter. After the preparation of charge sheet, the matter will go to the Magistrate.

Can I feed my dog with sweet and sugary substances? Is it bad for its health?

Dogs need sugar of some sort. They need carbohydrates [which are broken down into sugar or glucose by the body] to live and operate. We just don’t need to be giving them candy, since there’s no real added value.

If you want to avoid having to clean up vomit or diarrhoea, it’s probably best to avoid giving your dog sugar.

Chocolate contains theobromine, a substance that can be poisonous to your pet. Dark, semi-sweet and Baker’s chocolate, can be lethal if ingested.

The problem with sugar is that bacteria in the mouth use it, which produces acids. Acids increase the loss of minerals in the enamel, or the outer coating of the teeth, leading to dental disease.

Heart disease, joint problems, lethargy, and difficulty breathing from the additional weight on the chest wall, are just a few of the other problems that can result. In general, even if your pet avoids these diseases for a while, quality of life is decreased (less energy, less interest in playing, etc.) when he is overweight.

Sugar causes increased secretion of insulin, which the body needs to store and use sugar. Insulin has many effects on other hormones in the body, which can change a pet’s muscle tone, fat storage, immune system and energy levels. These changes can lead to weaker, less active and obese pets, who are more susceptible to other hormone related diseases, infections and obesity.

How can dog adoption benefit in my individual development?

• Better Health: A Chinese study found that there is a link between dog ownership and reduced risk of coronary artery diseases.

• You’ll be happier: Dog owners are less likely to suffer from depression, because taking care of a dog forces you to form a routine and stay active.

• Generally, shelter dogs are spayed and vaccinated which reduces the risk of any diseases.

• You are saving a life and it always brings good luck.

What precautions should a person take while buying dogs?

He should not buy any dogs at all. It is illegal for pet shops and breeders to sell animals.

But if he is insane enough to still go ahead because he needs to prove his own status by having a foreign dog/ cat, then he should make sure that the animal is not inbred, by asking for certification on who the parents are. He should also get a veterinary certificate on whether the animal has been vaccinated.

The certificate should be shown first and then checked out, as many certificates are false and 99% of the dogs sold have parvo or distemper. He should pay by cheque so that he can prove he bought the dog, as most sellers take the money in black and then, if the dog dies of these diseases, they refuse to acknowledge that they sold the dog. He should check whether the pet shop is                                licensed or not.

He should not buy a dog who is less than 2-3 months old, as the dog will not have been weaned and will be sick always.

What are the new techniques to avoid testing on animals?

1. Computer (in silico) Modelling: Researchers have developed a wide range of sophisticated computer models that simulate human biology, and the progression of developing diseases.

Studies show that these models can accurately predict the ways that new drugs will react in the human body, and replace the use of animals in exploratory research and many standard drug tests.

Quantitative structure-activity relationships (QSARs) are computer-based techniques that can replace animal tests by making sophisticated estimates of a substance’s likelihood of being hazardous, based on its similarity to existing substances and our knowledge of human biology. Companies and governments are increasingly using QSAR tools to avoid animal testing of chemicals, and PETA actively promotes and funds their use internationally.

2. Research with human volunteers: A method called “microdosing” can provide vital information on the safety of an experimental drug, and how it is metabolised in humans, prior to large-scale human trials. Volunteers are given an extremely small one-time drug dose, and sophisticated imaging techniques are used to monitor how the drug behaves in the body.

Microdosing can replace certain tests on animals, and help screen out drug compounds that won’t work in humans, so that they won’t needlessly advance to government-required animal testing.

Advanced brain imaging and recording techniques — such as functional Magnetic Resonance Imaging (fMRI) — with human volunteers can be used to replace archaic experiments in which rats, cats, and monkeys have their brains damaged.

These modern techniques allow the human brain to be safely studied down to the level of a single neuron (as in the case of intracranial electroencephalography), and researchers can even, temporarily and reversibly, induce brain disorders using Transcranial Magnetic Stimulation (TMS).