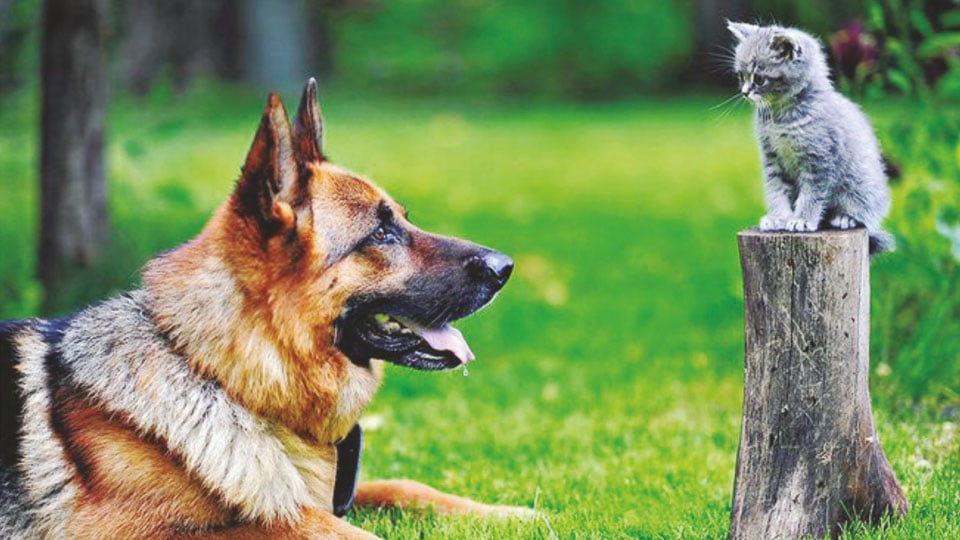 In this week’s Pet Talk, Maneka explains why dogs may stare at wall and why cats dislike making eye contact?

Is it okay to throw house spiders outside?

Spiders come in when they have enough insects to eat. Some people who see a spider in their house, feel that leaving it outside is a more compassionate action than killing it. If the spider is a garden one it will not have much problem surviving. But many spiders usually spend their entire life-cycle in or around the building. So throwing them outside would kill them.

Why does India face the stray dog problem?

Secondly, the Animal Birth Control (ABC) plan of the government to control breeding has inadequate funds for the programme. It is important that the government and animal welfare societies work together to address the problem. The municipal corporations should implement an effective garbage disposal system to keep stray dogs away. There is also a need of a safe oral anti-rabies vaccine and economic modes of sterilisation. The municipalities need to be trained. The Environment Ministry which has been handling this programme has no funds and no leadership. What is needed is for the Health Ministry to take this seriously.

What to do when your dog is constipated?

Dog constipation is the inability to defecate normally. Older dogs are more prone to this, although it can happen at any age. It should never be ignored, as extended periods of distress can cause serious medical conditions.

Listed below are some of the common causes of dog constipation:

If your dog has not defecated for two or more days, it is a clear indication that the dog is suffering from constipation. Other signs include straining or whimpering while attempting to defecate.

By determining the cause of constipation, the treatment is decided.

Why is my dog staring at the wall?

A dog staring at the wall need not be a concern. Dogs have significantly better hearing than we do. Sit next to the dog, be quiet and listen to any unusual noises. It could be an infestation along the wall. If your dog tilts his head from time to time, as if trying to follow a noise, he might be trying to hunt down a family of mice living within the walls.

If your dog is a senior and you have recently caught him staring at the wall, consult a vet to get him checked for canine cognitive dysfunction syndrome (CDS) which is similar to Alzheimer’s disease in humans. Other symptoms of CDS include disorientation, change in sleep habits and disregard of previously learned house-training rules. If caught early-on, the progression of this disease can be slowed down. The veterinarian may recommend increased mental stimulation in the form of play and exercise, feeding an antioxidant-rich diet, and may also prescribe medications to manage the dog’s anxiety.

Staring could also be an attention-seeking behaviour. If you inadvertently give your dog attention when he stares at the wall, he may repeat the behaviour to keep getting your attention.

Is dry food or wet food better for cats?

The answer varies from cat to cat. Many people leave out dry food for their cats to snack upon throughout the day. Some occasionally also supplement it with wet food. A common argument in favour of wet food is that it is high in protein while dry food has a lot of fillers. Feeding just dry food can lead to dehydration in cats, so it is important that, if they are on such a diet, they drink a lot of water. An ideal situation would be to get your cat acclimated to both dry and wet food so that all their nutritional requirements are met with. Cats are animals of routine, a change in texture or brand will always be rejected. It’s important that you introduce the new food gradually.

Looking at everyone straight in the eyes when introduced is a human trait, and is viewed as a friendly gesture. In animals, eye contact is a sign of showing dominance and threat. Therefore, direct eye contact may intimidate your cat and make her uncomfortable. Some cats eventually learn to accept, and return affection by sharing glances with their humans, but may still consider such efforts by strangers to be a threat to their personal space. Instead of forcing eye contact on your cat, learn your cat’s way of communication. When your cat is relaxed, look at her and blink slowly. Many cats will return this gesture. This is a way of them communicating that they trust you and are content.

How can you stop your cat from climbing on tables?

Cats are inquisitive animals who like to explore their environment. They are equipped with muscled backs and hindquarters that give them tremendous power to jump. They seek out high vantage points, like shelves, to survey their territory, escape from another household pet or from something that scares them. Providing alternate places to climb, jump, or escape can reduce their desire to climb on your furniture.

When you find your cat on a table, do not scold or scare her. Instead, gently pick her up and put her down. Don’t make it a big deal — just help her learn that jumping up on a furniture will not result in her being able to stay there. Repetition is the key to success here, so be consistent about the removal.

Another solution is to keep aluminium foil or newspaper on the table — anything that will make a loud noise when the cat jumps on it. This will startle the cat and make her realise that the table is not a safe place. Putting sticky tape on the edges of the furniture will also deter the cat from climbing the table, as she will find the experience unpleasant and not worth repeating.

Cats are natural hunters. Lasers throw brightly coloured dots which move quickly in different directions mimicking the movement of a prey. This initiates the cat’s predatory instinct of stalking, pouncing and killing the prey. Chasing laser pointers can be a good exercise for cats as they keep chasing the dot trying to get it under their paws. Most cats will stop the chase and rest after they get tired. Some cats get angry and frustrated because they are not able to catch the prey. If you see your cat getting frustrated, lead the dot to some stuffed or feathered toy so that they are able to finally ‘catch’ the prey and satisfy their hunting instinct.

Why do cats shake their head while eating?

As natural hunters, cats have wild habits, such as keeping some food on the ground from the bowl or shaking their head while they chew. This behaviour mimics how they would eat a bird or rat by dragging the body on the ground. The harder the food is to chew, the more they will shake their head. Cats may also shake their head when they pick up a small bite of food so as to imitate the action of shaking a bird that has been killed to loosen the feathers.