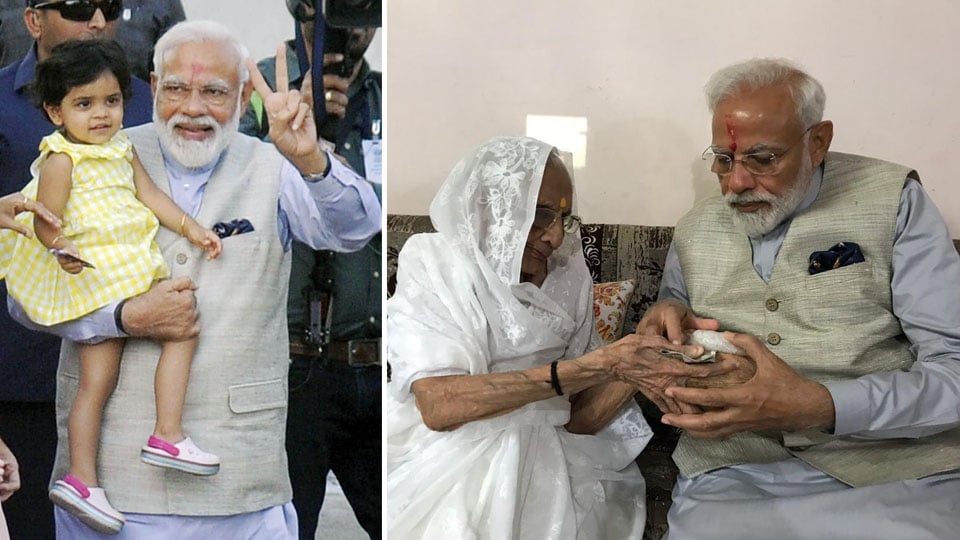 New Delhi / Bengaluru:  Polling began this morning for the third and largest phase of Lok Sabha election in 117 seats, including all constituencies in Gujarat and Kerala, with BJP President Amit Shah, Congress chief Rahul Gandhi and several Union Ministers among prominent candidates in the fray. Till 2 pm, the overall voting percentage stood at 37.94 percent while Karnataka recorded 36.74 percent.

The stakes are high for the ruling BJP and its allies as they bagged 66 seats out of these 117 spread across 14 States and Union Territories in 2014 general election, while the Congress and its alliance partners won 27, and the rest went to other opposition parties and Independents.

Raghavendra is the BJP candidate from the Constituency, which is witnessing high voltage battle this time. Hundreds of his supporters were gathered near the temple. The family will cast the votes at Booth Number 134 of Taluk Office at Shikaripura.

Snake inside VVPAT machine in Kannur

Voting was briefly halted at a polling station in Kerala’s Kannur Lok Sabha constituency after a snake was found inside a VVPAT machine, triggering panic among officials and voters. However, the snake was removed and voting continued.

Prime Minister Narendra Modi today said that the power of voter ID used for voting in a democracy was many times more than the IED (Improvised Explosive Devices) of terrorists.

Talking to reporters after casting his vote at Nishan School booth in Ranip area in Ahmedabad which falls under Gandhinagar Lok Sabha constituency, PM Modi said, “India gives strength to democracies across the world.”

He said, “On the one side terrorists use IED as their weapon while the Voter ID is used as the weapon and power of democracy. The power of voter ID was many times more than the IEDs.” The Prime Minister said that he was happy to get a chance to vote in his home-State. “The kind of pious joy one feels after taking a holy-dip during Kumbh is what I am feeling after casting my vote,” he said.

4 COMMENTS ON THIS POST To “Phase-3 Lok Sabha polls”