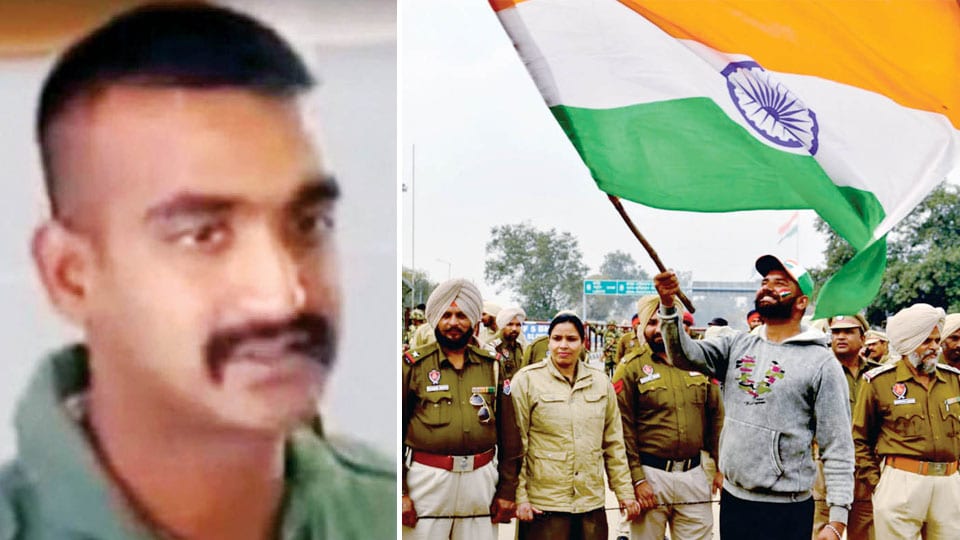 New Delhi: India is waiting to welcome Wing Commander Abhinandan Varthaman, the Indian Air Force pilot in Pakistan’s captivity, with bated breath. Latest reports from across the border say that Abhinandan has been handed over to Indian High Commission in Pakistan at Islamabad and he is expected to cross Wagah border after 3 pm.

The Indian High Commissioner in Islamabad has completed documentation procedures and the Pakistani Ministry of Foreign Affairs has given a go-ahead.

On his return journey, Abhinandan, the second-generation IAF pilot, will be received by Group Captain J.T. Kurian, Air Advisor in the Indian High Commission. From Attari, Abhinandan will be flown to New Delhi.

“Wing Commander Abhinandan Varthaman will cross the border today. I can’t tell you exact time since there are certain formalities. A senior Indian Air Force team from Delhi is in Amritsar, they will be the ones to receive him,” Amritsar Deputy Commissioner Shiv Dular Singh Dhillon told reporters.

“There is uncertainty yet about timing of arrival of Abhinandan, but it seems sure that he will return after 4 pm. He may be handed over to India during the beating retreat ceremony,” Dhillon added.

The IAF pilot was taken into custody by Pakistan on Wednesday after he landed on the other side of the Line of Control as his aircraft crashed during an aerial dogfight between India and Pakistan. In a diplomatic victory for India, Pakistan Prime Minister Imran Khan had yesterday announced that the captured IAF pilot will be freed as a “gesture of peace” “Abhinandan was brought by Pakistani authorities from Rawalpindi to Lahore and handed over first to the International Committee of Red Cross (ICRC) under rules of the Geneva Convention before being brought to the Indian High Commission at Islamabad to return home,” sources said.

India wanted to send a special flight to bring back Abhinandan but Pakistan denied permission. Sources say India wanted to bring him back to Delhi in a special IAF flight and take him away for a debriefing and medical check-up. Officials did not want the pilot to be accosted by reporters, reports said.

Abhinandan’s parents arrived in New Delhi last night and are in Amritsar to welcome him. Abhinandan is the son of Air Marshal (Retd.) Varthaman and Dr Shobha Varthaman. The parents were given a standing ovation as passengers made way for them in the flight ensuring that the couple gets off first. In photos and videos shared by passengers on social media platforms, the couple can be seen acknowledging the clapping, cheers and thank you with nods of their heads.

A Pakistani activist today filed a petition in a court, challenging the release of Abhinandan Varthaman. The court, however, rejected the writ petition filed by an Islamabad-based activist.

Meanwhile, as India awaits Abhinandan’s return, the mood at the Indian side of Wagah is quite energetic. People reached Wagah border in Amritsar with drums, garlands and flags to receive Abhinandan. People started arriving in Attari, around 30 km from Sikh holy city of Amritsar, since 6 am. Their numbers swelled by this noon.