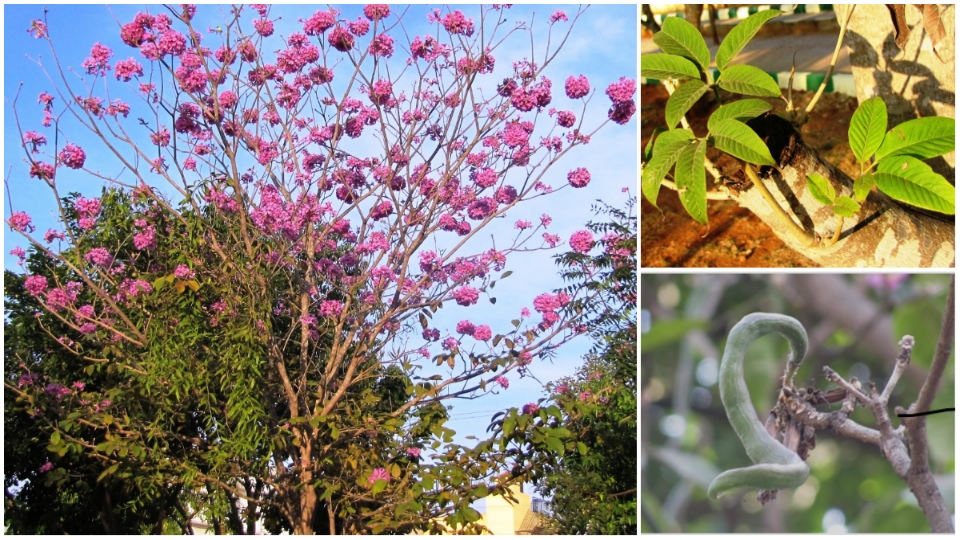 With the onset of winter many a deciduous tree shed their old leaves followed by fresh growth of foliage and flowers.  This phenomenon of rejuvenation begins during December in many ornamental trees lining the avenues of Mysuru.   Among these ‘Pink Lapacho’  is the first to dress up in a new garb.  With the leaves falling in the first few weeks and the blossoms covering the whole tree by Christmas and  New year,   it provides a festive look on the roads and parks.  During the peak season, the tree is leafless packed with clusters of congested terminal inflorescences held on a linear plane. Penetrating sun rays during mornings make the tree look magnificent and a treat to the eyes of the passers-by.  No doubt, it is the most beautiful ornamental tree during winter in Mysuru. 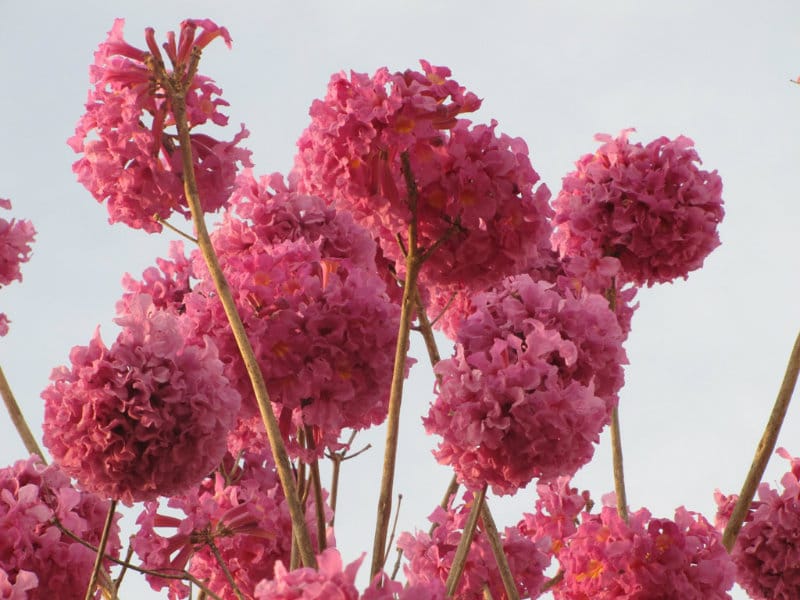 It is a large deciduous tree, sometimes reaching 30 m height. The straight bole can be 60 – 80 cm in diameter. Generally, one third of the tree height is trunk and remaining two thirds are its longer branches. It has a large,  globe-like or round canopy which is often sparse. The bark is brownish grey, tough and hard to peel. The wood is of a pleasant yellowish colour, sometimes knotted.  The leaves are compound, palmate, with usually 5 leaflets with petioles of 2 to 3 inches long. They are opposite, elliptic and lanceolate shaped with slightly serrated margins and pinnate venation. The flower is large, tubular shaped, its corolla is often pink or magenta, about 2 inches long.  Individual flowers are magenta with canary-yellow streaks.  There are four stamens and a staminode. The fruit consists of a narrow dehiscent capsule containing several winged seeds.

Seeds are sown as soon as they ripe in seed beds or containers.  The germination occurs in 10 – 12 days. Seedlings grow quickly and are ready for transplantation in 3 – 4 months.  Young plants establish well reaching a height of around  6 – 8 ft within two years. The tree can also be propagated by ‘air layering’ and ‘cuttings’ of half ripe stems. 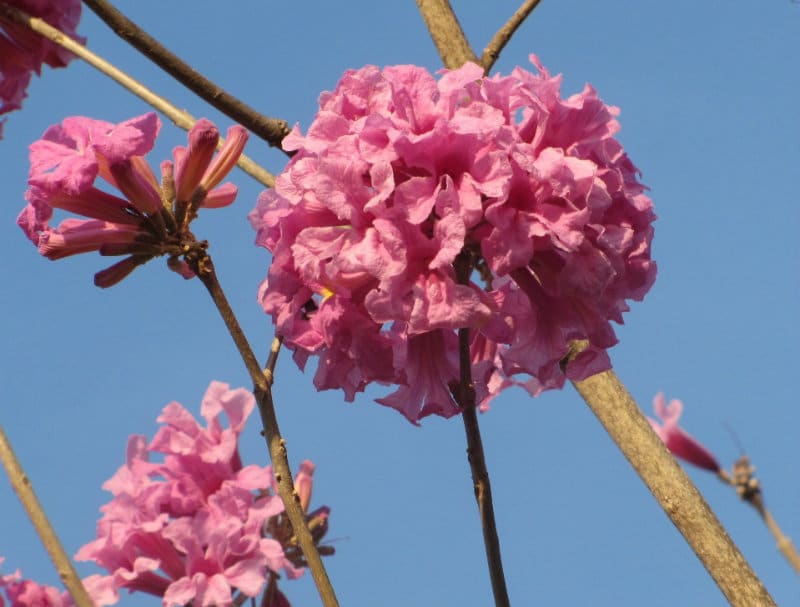 In its nativity,  it is a  multi-purpose tree growing wild and known for valuable medicine and timber besides beautification of landscape.

Lapacho plays an important role for South American indigenous population and used by herbalists as a general tonic, immunostimulant and for intestinal candidiasis. In traditional ethno medicine a bitter brownish-coloured tea known as lapacho or taheebo is prepared from inner bark (bitter, cooling, pungent) and is widely used as a tonic during flu and cold season as well as for easing smoker’s cough.  The tonic works by promoting lungs to expectorate and free deeply embedded mucus. The heartwood contains naphthaquinone called lapachol, which exhibits antibiotic and anti-tumor effects.  Excessive use of the plant parts can lead to nausea, vomiting, dizziness and diarrhoea.

The valuable timber, sometimes traded as “Brazilwood”, is used for making flooring and decking. Its commercial exploitation is one of the causes of deforestation in Brazil.

Manasagangothri Campus, Nivedita Nagar Park and many other parks, private gardens and avenues.