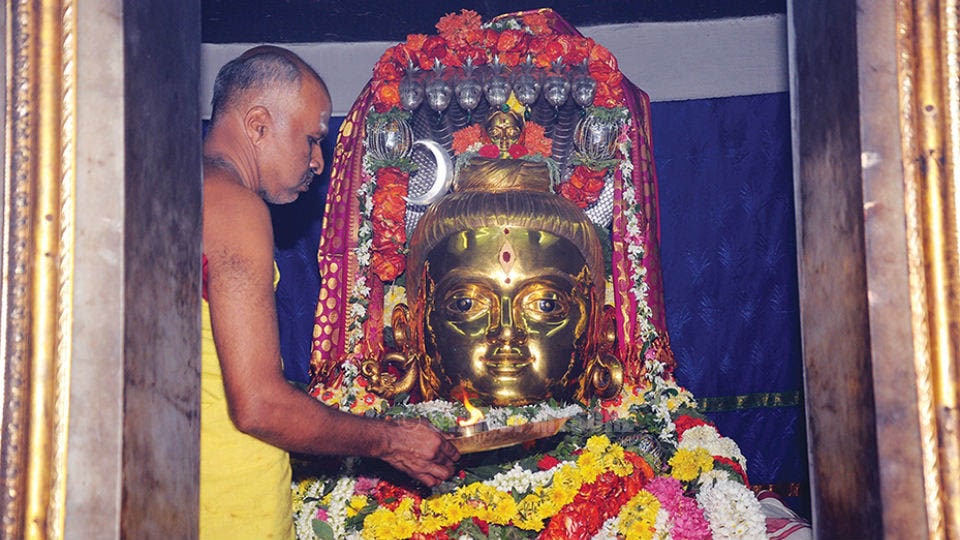 Maha Shivaratri which means ‘The Great Night of Shiva’ is a Hindu festival celebrated annually in honour of the God Shiva.

It is a major festival in Hinduism and  marks a remembrance of “overcoming darkness and ignorance” in life and the world. It is observed by remembering Shiva and chanting prayers, fasting, doing Yoga and meditating on ethics and virtues such as self-restraint, honesty, forgiveness and the discovery of Shiva. The ardent devotees keep awake all night chanting hymns of the Lord Shiva. Others visit one of the Shiva temples or go on pilgrimage to Jyotirlingams.

Offerings of fruits, bilwapathra (sacred leaves), sweets and milk to Shiva are made, some perform all-day fasting. Maha Shivaratri is celebrated over three or ten days based on the Hindu luni-solar calendar. Every lunar month, there is a Shivaratri (12 per year). The main festival is called Maha Shivaratri, or great Shivaratri, and this is on 13th night (waning moon) and 14th day of the month Phalguna (Magha). 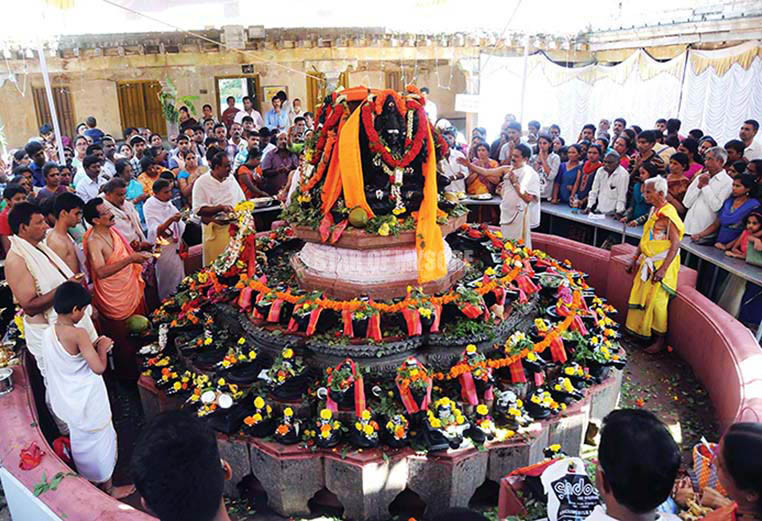 Devotees are seen offering puja to 108 Shivalingas at the Gurukula Mutt on Ramanuja Road.

Maha Shivaratri festival was celebrated with devotion and religious fervour across Mysuru yesterday. Special pujas and prayers at many temples marked the occasion.

At the Trinayaneshwara Swamy temple popularly called Trineshwara Swamy Temple at the Mysore Palace premises, special puja began from 4 am. The temple drew a steady stream of devotees throughout the day. Mysuru Royal Family member Pramoda Devi Wadiyar visited the temple and participated in the special puja. 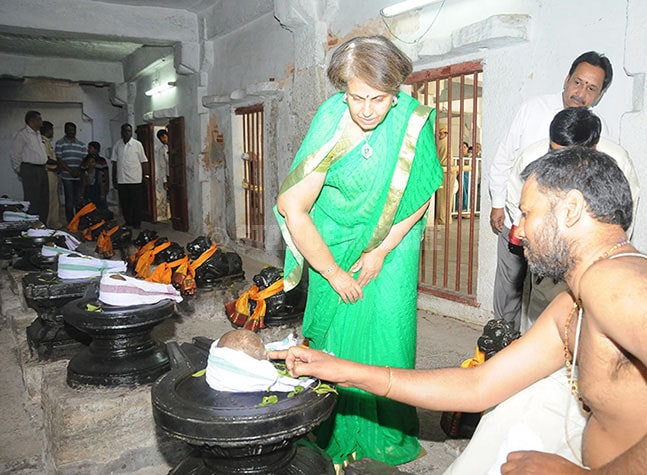 A special aspect of the temple is adorning the Shivalinga with the 11-kg golden mask (Chinnada Kolaga) along with other valuables including ear-rings made of emeralds, donated by the then Maharaja Jayachamaraja Wadiyar to celebrate the birth of his son Srikantadatta Narasimharaja Wadiyar in the year 1953.

Shaivaite temples in Mysuru were decorated with flowers and buntings. The Ramanuja Road was abuzz with activities at the two Shiva temples there – Sri Kamakameshwari Temple and 108 Shiva Temple. Devotees waited in long queues to pay obeisance to the deities.

The Srikanteshwara temple at Nanjangud, considered as Dakshina Kashi, was teeming with devotees from all over the State. For many pilgrims, a visit to Nanjangud during Maha Shivaratri is an annual ritual that is accompanied by a dip in the Kapila. At the temple, a silver main door was erected at Parvathi temple at a cost of Rs. 15 lakh by devotees from Bengaluru. 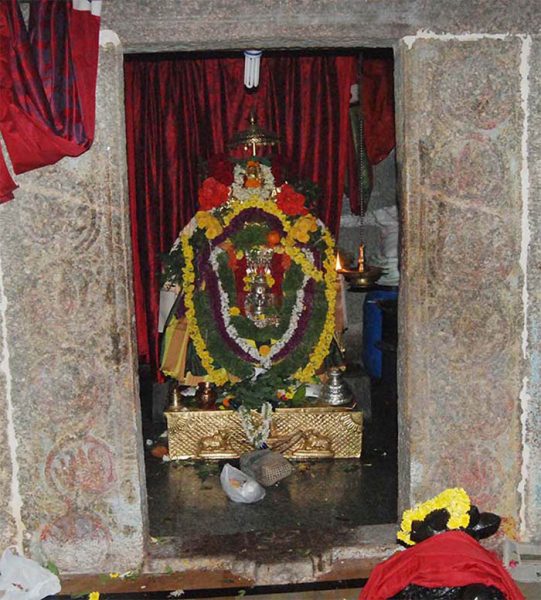 After taking holy dip in Kapila River, the devotees took Darshan of lord Nanjundeshwara, the deity of Nanjangud after standing in long queues braving scorching sun. Various Abhishekas and Mahamangalarathi were performed, under the guidance of tempest priest Nagachandra Dixit, to the main Shivalinga accompanied by chanting from the scriptures. It is customary among devotees to camp in the temple precinct and maintain a vigil till dawn. 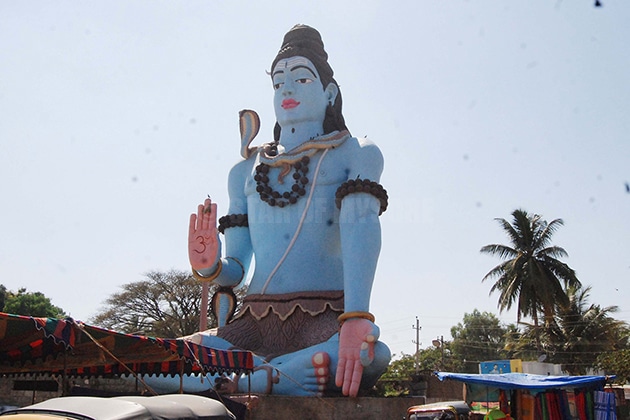 A mammoth statue of Lord Shiva at Nanjangud.

The Chandramouleshwara temple at V.V. Mohalla, Maruti Temple in T.K. Layout, the Gurukula Mutt, Sri Vaidyanatheshwara temple at Talakadu,and Sri Mallikarjunaswami Temple at Muduktore were other temples that were beehives of activity. 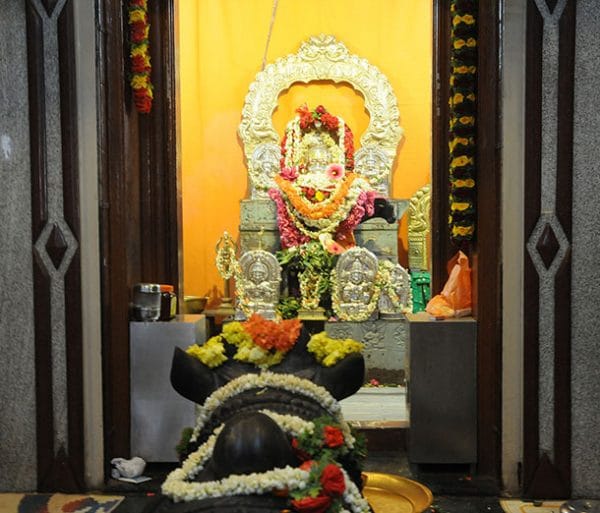 Members of Prajapita Brahmakumaris Ishwariya Vishwa Vidyalaya, at the ongoing exhibition at the Maharaja College Ground, had installed replicas of 12 ‘Jyothirlingas’ and 40feet height Amaranth cave. Thousands thronged the venue to have a Darshan of the ‘Jyothirlingas’. The replicas of Shivalingas started from Somanath temple in Gujarat and end at Sri Grishneshwar in Maharashtra. There was a display of a short story about the significance of the place, the story behind each ‘Jyothirlinga’. The replica of Amarnath was a cynosure of all eyes. 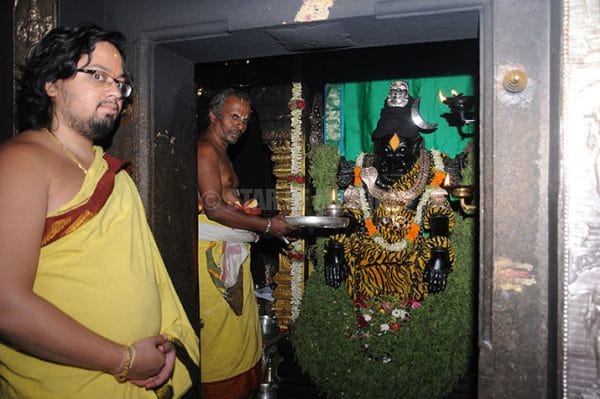 Special pujas were offered at Yoga Narashimaswamy temple at Vijayanagar.

READ ALSO  Nizamuddin Markaz: 75 from Mysuru were at Tabligh event 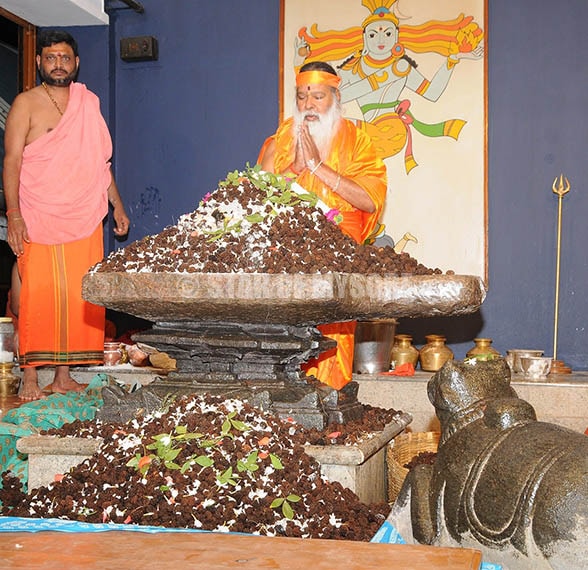 Thousands of devotees visited Male Mahadeshwara Swamy temple atop MM Hills in Chamarajanagar district and participated in religious programs which were conducted all through the night. A car festival was organised where the chariot carrying deity was pulled by devotees.

The Hill, most popular pilgrimage centre at Hanur, was decked up for Maha Shivaratri. Undeterred by the scorching sun, hundreds took up a padayatra to the temple. 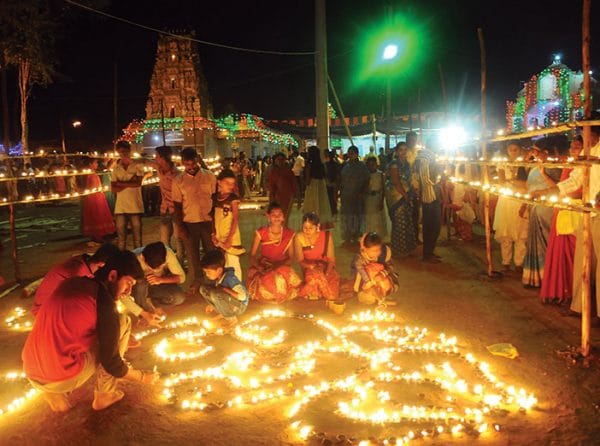 A large number of devotees took part in the deepostava organised at Male Mahadeshwara temple at Kumbara Koppal.

One such Hindu temple which was reconstructed by the Wadiyars is the Prasanna Nanjundeshwara Temple located in old santhepet in city.

The temple is believed to be renovated by Mummudi Krishnaraja Wadiyar after the Wadiyar’s got back the reigns of Mysuru Kingdom from Tipu Sultan. According to temple priest Srinivasa Murthy, the Prasanna Nanjundeshwra Temple was called as the ‘Gejje Puje’ temple which was frequently visited by devadasis of Mysuru.

Later, the temple was renovated by the devotees. The annual Brahmarathotsava or the car festival is held on the full moon of Holi. The temple attracts a lot of devotees on Maha Shivaratri during which people residing in surrounding areas visit the temple to seek the blessings for Prasanna Nanjundeshwara.

It also houses a Navagraha temple and a Peepal Tree which is believed to be 300 years old.