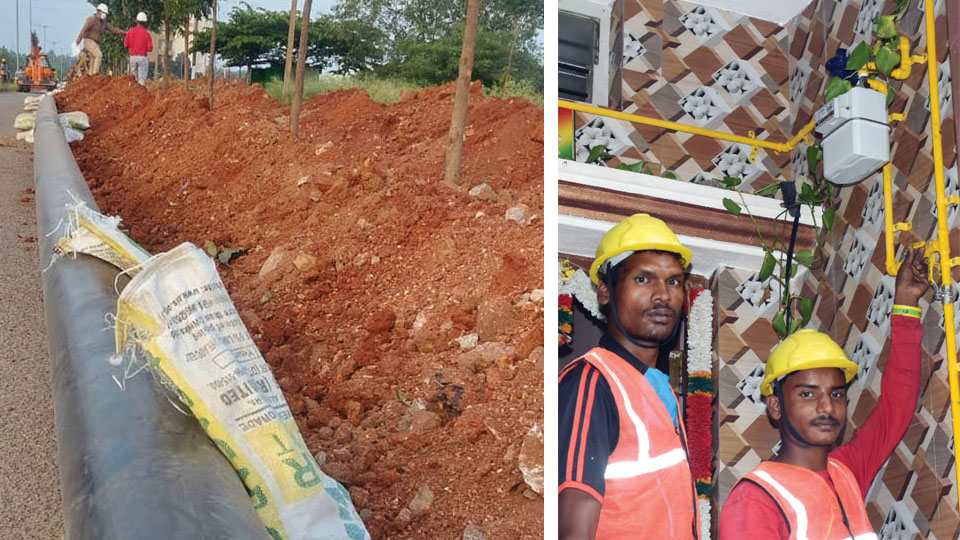 Piped Natural Gas to Mysuru All you wanted to know

In the world, the western democracies led by the US have threatened to stop the natural gas pipeline from Russia to Germany. Here in Mysuru, a similar thing is being carried out to stop Piped Natural Gas (PNG) supply by Mysuru City Corporation (MCC) Corporators led by BJP MLAs.

Stopping Russian gas pipeline is to prevent potential attack of Ukraine by Russia. But what the Corporators are doing as we all know is for a less noble cause. They are putting hurdles to Prime Minister Narendra Modi from achieving his vision of India. He wants to increase the gas share of energy requirements from the current level of 6 percent to 15 percent by 2030 !

It is a crying shame that with the exception of Mysuru-Kodagu MP Pratap Simha, Chamundeshwari MLA G.T. Devegowda and MLC A.H. Vishwanath, just about every leader is spreading misleading and erroneous information about PNG. As expected, LPG dealers who will be adversely affected have not been helpful.

In all developed countries, natural gas is widely used (gas share is 26 percent). Even in developing countries where gas is produced, it is widely used despite the huge initial investment required for gas supply infrastructure. As the world goes through an energy transition and the fossil fuel era comes to an end, gas is expected to play a critical role. It is for this reason that PM Modi has set an ambitious goal of 15 percent and to reach 70 percent of the Indian population by 2030.  That being so, why are his own party MLAs opposing gas for Mysuru?

PNG is safer and environmental-friendly

PNG (mostly methane) has one carbon atom whereas LPG (which is a blend of propane and butane) has three and four carbon atoms. Thus PNG is lighter than LPG and produces less Green House Gases (GHGs).

GHGs are the reasons for the world temperature to increase. Today, temperature is already higher by one degree compared to pre-industrial era. Thus by switching from LPG to PNG, we contribute to reducing climate change, contrary to what some have claimed during the press briefings.

It is true that methane is one of the potent Green House Gases when it is let go into the atmosphere. But PNG is burnt and not let into the atmosphere. Thus to claim that it contributes to climate change more than LPG is to mislead the public by comparing apples and oranges.

Both LPG and PNG need to be handled carefully since both are easily combustible. But handling methane is far safer than LPG because it disperses into the environment quickly. Thus fire hazard is reduced. As is well-known, handling LPG cylinders is not easy, especially for elderly people.

Much ado about nothing

There is much ado about nothing about the road-digging charges. Ostensibly this seems to have caused BJP MLAs to differ from BJP MP. They claim that the city is short changed.  After talking with the Manager of AG&P Pratham, a Singapore-based company which is the distribution company for Mysuru, I found out that fees paid are really not just for digging. It is actually the fees paid to the city for giving rights to lay the pipeline.

However, if it involves laying pipelines also by digging asphalted roads, then the company should pay an additional amount to the city for asphalting.

Whether it is laying pipeline on footpath or on roads, the company has to restore the land by filling the dug up roads to its original condition. According to the AG&P, the amount paid by the PNG company in Hubballi (owned by Adani and Indian Oil) is Rs. 300 per metre for footpaths and for roads it is Rs. 900 – Rs.1,000 per metre.

However, in Bengaluru where the contractor is GAIL (Public sector company, Gas Authority of India Limited), irrespective of footpath or roads, the amount is the same which is Rs. 2,200 per metre. One of the reasons for higher cost is that in Bengaluru per metre more connections can be given because of higher density.

MLAs and Corporators felt that rates fixed for road laying charges were not adequate. Did they think that Mysuru should also get the same rate as Bengaluru of Rs. 2,000 per metre?  Even so, they could have negotiated the rates with AG&P instead of finding faults.

Corporators could have made a counter offer after analysing fees charged in different cities. Since AG&P has flexibility in charging PNG customers, they should be amenable to a higher rate. Instead the public was given the impression that the roads cannot be repaired for the quoted rates when in fact the real reason was different.

I have attempted to shed more light on why PNG is preferred to LPG from just about every consideration — safety, ease of handling, economics, climate change, etc. When the future history of Mysuru will be written, political games played by our elected leaders will become a shameful chapter in infamy. When they prevented the 24×7 water supply project from being implemented by JUSCO in Mysuru, we the people kept quiet. Let us not allow history to repeat in the case of PNG supply also.

Economics of PNG Vs LPG

Let us look at all important factors of economics of PNG as against LPG. Here again the public has been given the wrong information. Compressed Natural Gas (CNG) used in vehicles cost Rs. 65 per kg. CNG gives about 20 kms while one litre of petrol costing Rs. 100 gives about 20-22 kms. Assuming a vehicle runs for about 50 kms per day, the owner can save about Rs. 32,000 per year. Thus he can recover the CNG conversion cost in 1.3 to 2 years.

On the other hand, for residential customers who on average consume six LPG cylinders per year, annual savings would be Rs. 1,000 to Rs. 2,447 if they switch to PNG.

AG&P is already supplying CNG to six service stations in Mysuru by using expensive Cryogenic tankers.  Gas is cooled to -260 F (-160C) and is transported as LNG (Liquefied Natural Gas) in these tankers from Ennore. However, once the gas pipeline from Bidadi to Mysuru is constructed, natural gas will be supplied in gaseous form which is much cheaper and safer. Here again the public was given the wrong information that PNG gets “solidified” at lower temperature!

Above savings are based on the LPG cylinder cost of Rs. 902 and PNG cost of Rs. 1,130 to Rs. 750 per million BTU. These savings can change depending on three factors:

1. If the Government gives a higher or lower subsidy to LPG.

2.  If the price charged to gas distribution companies by the Government changes.

3. Distribution company decides to use its monopoly power to charge more and still be competitive.

It is sufficient to state that all these three can happen without elaborating them. It would take an even larger article to discuss them. Still it is a safe bet that PNG is more economical than LPG unless the so-called APM (Administered Price Mechanism) increases significantly. APM is set by the Petroleum Ministry based on international prices.