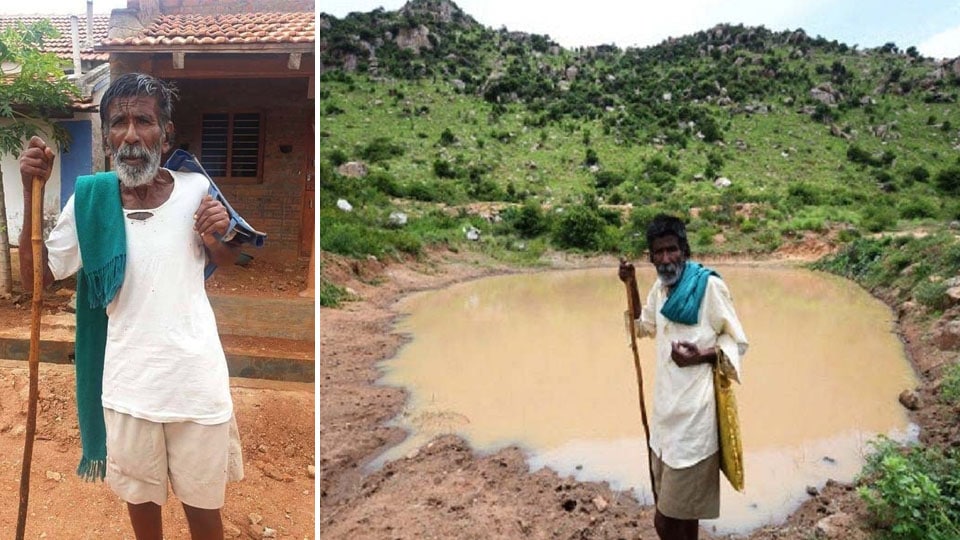 The octogenarian, who created 16 ponds, responds, “It is the greatest joy of my life”

Mandya: An 84-year-old shepherd from a remote Dasanadoddi village in Malavalli Taluk of Mandya found a place in Prime Minister Narendra Modi’s ‘Mann Ki Baat’ that was aired on All India Radio yesterday.

Modi, asking listeners to divert attention and efforts towards water conservation and to focus on saving water, discussed this year’s monsoon season and said, “A little effort by us will help our nature and environment significantly.”

He then narrated the story of Kamegowda, an octogenarian shepherd who has dug 16 ponds in his village in the past few decades. To solve the village’s problem of water scarcity he has dug the ponds to collect rainwater, with his own savings, converting the barren hillock into a bed of lakes. The Prime Minister urged people to think about initiatives that can conserve water.

Responding to Modi’s gesture, Kalmane Kamegowda said, “The Prime Minister is using all his knowledge to save people from COVID-19 and he remembered me. It is the greatest joy of my life.”

PM Modi applauded his efforts and referred to him as one of the “water warriors” in the country. “Kamegowda takes out his animals for grazing, but at the same time he has taken it upon himself to build new ponds in his area. He wants to overcome the problem of water scarcity in his area and is engaged in work on constructing small ponds. Today, the entire area has got a new lease of life on account of these ponds,” the Prime Minister said.

Kamegowda has no formal education but has turned an entire Kundooru Betta hillside at Dasanadoddi village green over the past four decades. About 42 years ago, Kamegowda realised that Kundooru Betta (Hill) which is located beside his village had very less greenery.

He realised that there was no water retention on the hill. Whatever water it received from the rain, either ran down the hillside or got evaporated or absorbed. That’s when he thought of developing a watering hole for the animals and birds. He went on to create 16 ponds.

With a desire to ensure a green cover on the Kundooru Betta, Kamegowda also planted more than 2,000 saplings on the hillock. With the plants having grown into trees, there is a lush jungle on the hillock that is a treat to the eyes.

People had called him crazy — or ‘Huchcha’ that means lunatic in Kannada — for working day and night to build the tanks, but the efforts of the illiterate shepherd have been an inspiration to people hoping to undertake such work to increase the green cover.

The same ‘Huchcha’ was awarded Rajyotsava Award in November 2018 and the Award recognised Kamegowda’s selflessness. Always clad in ragged clothes, holding a club in hand and with a small pouch hanging from his shoulder, this old man walks throughout the day to see the lakes that he nurtured and beams a bright smile every time he spots birds and animals rejoicing in the lakes – a gift of Mother Nature.