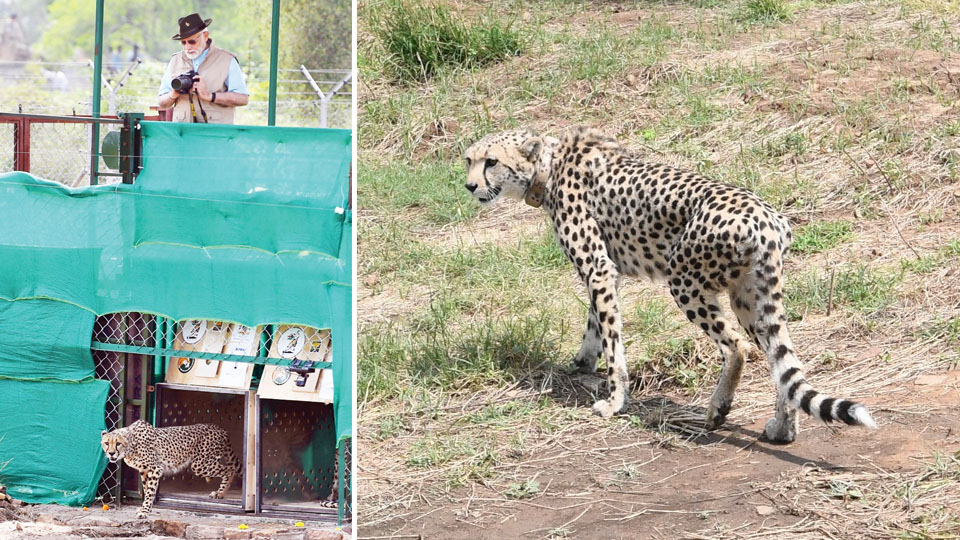 New Delhi: Cheetahs, the world’s fastest mammals, have been reintroduced to India.

Eight Cheetahs (5 females, 3 males) were brought from Namibia in a cargo flight that was a specially customised tiger-faced B747 jumbo jet. The flight landed in Gwalior this morning, after which they were taken to Kuno National Park, Madhya Pradesh, in a copter.

On his 72nd birthday today, Prime Minister Narendra Modi released three animals into an enclosure spread over 10-km in the presence of Madhya Pradesh Chief Minister Shivraj Singh Chouhan and wildlife experts. The PM released the felines by operating a lever that opened the cages.

According to Cheetah Conservation Fund (CCF), an international not-for-profit organisation head quartered in Namibia and dedicated to saving the fastest land animal, the five female Cheetahs are aged between two and five years, while the three males are aged between 4.5 and 5.5 years.

The Cheetahs were flown from Southern Africa for their reintroduction in India after the species was declared extinct in the country in 1952. Modi expressed his gratitude to the African nation of Namibia saying that it would have not been possible without their help.

“Project Cheetah, under which the Cheetahs were reintroduced in the country after they became extinct seven decades ago, is our endeavour towards environment and wildlife conservation,” he said, adding that, “21st century India is giving a message to the world that economy and ecology are not conflicting fields.”

The 750-square-kilometre (290-square-mile) protected park was selected as a home because of its abundant prey and grasslands. Another 12 Cheetahs are expected to join the fledgling Indian population next month from South Africa.

And as India gathers more funding for the Rs. 910 million project, largely financed by the State-owned Indian Oil, it hopes to eventually grow the population to around 40 cats.

Radio collars have been strapped on all the Cheetahs to be monitored through satellite. There is a dedicated monitoring team behind each Cheetah which will monitor their movements round-the-clock.