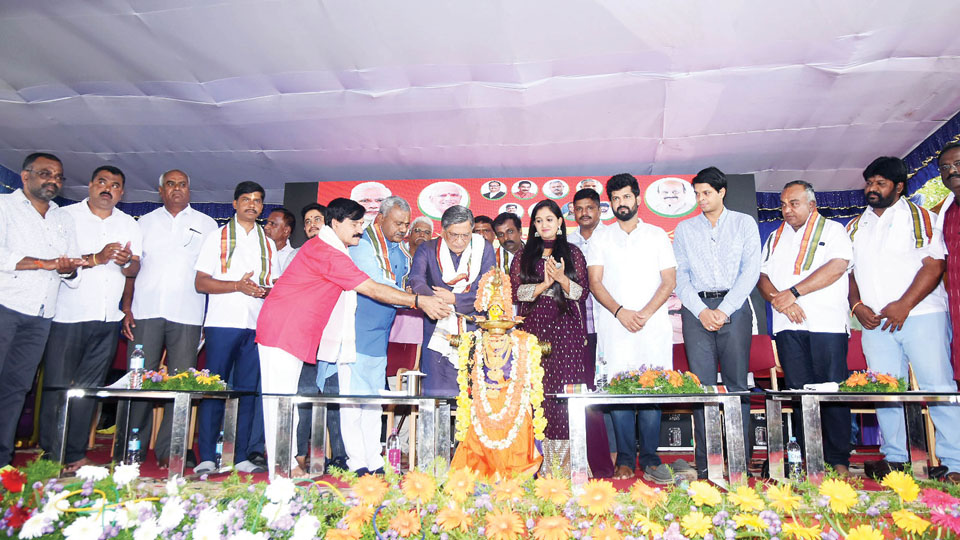 The Utsav has been organised by K.R. MLA S.A. Ramdas marking the birthday celebrations of Prime Minister Narendra Modi and is aimed at reaching out various Central and State Government schemes to targeted beneficiaries of K.R. Assembly segment.

The nine-day event will be witness to the distribution of benefits and facilities under a host of Central and State Government Welfare, Housing and Empowerment schemes to targeted beneficiaries, with one concerned Government Department taking part on one day of the nine-day event at Ramalingeshwara Park, which concludes on Sept. 25.

The event also features a variety of other social activities such as blood donation camp, health check up camps as part of ‘Healthy Mysuru’ initiative, planting of saplings and such other numerous  service programmes (Seva Abhiyaan).

Prior to the launch of the Utsav, S.M. Krishna was brought in an open jeep to the venue in a grand procession from Chamundipuram Circle. The procession was accompanied a host of folk troupes, with crowds greeting and cheering the leaders all along the route. Ramdas, District Minister S.T. Somashekar, MP Pratap Simha, Mayor Shivakumar and others were in the open jeep.

Speaking on the occasion, Krishna said that he knows Ramdas well for the past several years as an MLA. Maintaining that he was impressed with Ramdas’ speeches in the Assembly when he was the CM, he said that Ramdas used to target the then Congress Government headed by him with facts and figures.

Recalling the political journey of Ramdas, Krishna said that the conduct of Modi Yug Utsav is a perfect birthday gift to Prime Minister Modi, who has been working overtime to make the country an economic giant.

The veteran leader said that he was delighted that Modi’s birthday is being celebrated by the K.R. MLA in a purposeful manner, by delivering the benefits to numerous beneficiaries of various Government schemes. He wished the Utsav all success.