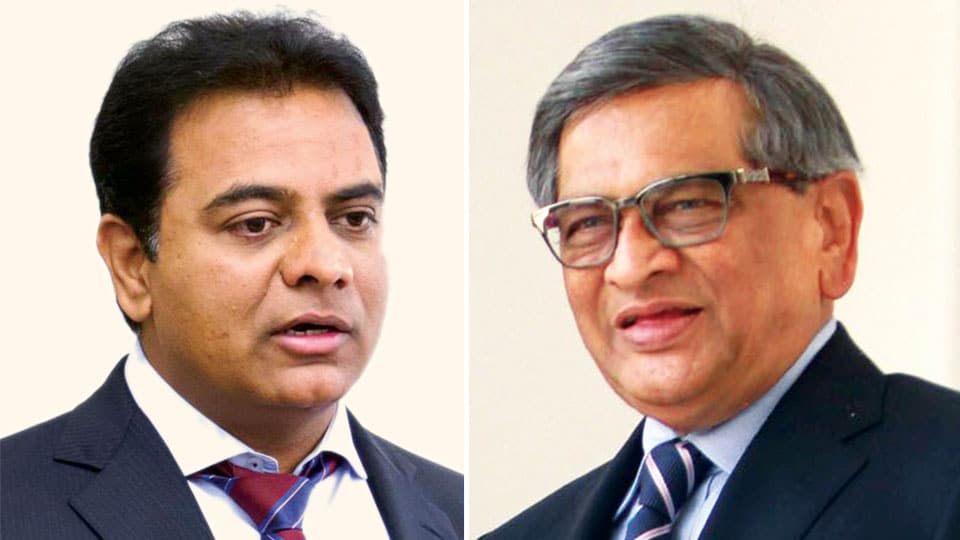 On July 9, Kitex Garments, the second-largest children’s apparel manufacturer in the world, announced that the company would invest an initial Rs. 1,000 crore in Warangal, Telangana. How this investment came about has lessons for many States and its Ministers.

Initially, this was a Rs. 3,500-crore project, which was supposed to come up in Kerala but the approvals from the Government were constantly delayed.

It has been reported that Kitex’s Chairman Sabu Jacob got tired of dealing with the Kerala Government and thought of delaying the project when he got a call from the IT and Industries Minister of India’s youngest State — Telangana.

K.T. Rama Rao, the IT and Industries Minster of Telangana, told Sabu Jacob to open the factory in his State. The next morning the Telangana Government sent a special flight to Kerala to bring the Kitex team from Kochi to Hyderabad for a meeting. And by the end of the day it was announced that Kitex had committed Rs. 1,000 crore and will be setting up their factory in Telangana. Kerala’s loss, Telangana’s gain.

This is not the first time that Telangana’s Industry Minister has shown proactive attitude to attract industries to create jobs. Karnataka too lost an industry to Telangana.

Four years ago, a mobile phone company had approached the Karnataka Government for land and faster approvals to set up a manufacturing unit in the outskirts of Bengaluru. The Minister they met put them on to some officials who then kept them waiting and waiting.

When they tried to contact the Minister to complain about the delay, they got a cold shoulder. The company decided to move the factory to Chennai…but then they too got a call from the Industries Minister of Telangana.

Like they did with Kitex now, back then too, the very next day the mobile company’s team was flown to Hyderabad, meetings were held, an IAS Officer was deputed as the point man for all clearances with a time-line to deliver. Five weeks later, land was approved and clearances were given.

It has been four years since this incident happened and today there is a factory in Telangana that manufactures numerous parts of a cell phone and employs nearly 500 people and growing! Like with Kerala, this too was Karnataka’s loss and Telangana’s gain.

This reminds me of our former Chief Minister S.M. Krishna. He too was a proactive politician. Speaking about the importance of traffic management in a business city like Bengaluru at an event in Mysuru in 2016, he recalled how when he had telephoned Wipro Chairman Azim Premji requesting him to come for a meeting at Vidhana Soudha in the evening, Premji told Krishna that since Sarjapur Road was too congested it would take him 1 hour 45 minutes to get to Vidhana Soudha from his office, which was a waste of time; so instead he would come straight to Vidhana Soudha from his house before going to work the next day morning.

It seems, Krishna immediately called one of his officers and told him to see if what Premji was saying was true and if it was, then there must be a “visible change” within a month.

When I heard this I was left wondering, what would happen today if an industrialist had told that he cannot come when he was called because of traffic and instead will come when it is convenient to him? Surely, there would have been raids on his factory by various Government Departments and the industrialist’s life would become a living hell.

But S.M. Krishna, when Premji said he could not come, did not feel offended, like typical politicians with fragile egos do; instead he saw a problem and wanted to fix it. May be, that’s because Krishna saw his position as CM differently than most other leaders before him or after him — he saw himself as a facilitator rather than an egocentric power centre.

That’s why he once said, “We do not look at investors as businessmen. We consider them as our partners — partners in development and technological upliftment.” No wonder, Krishna was voted the ‘Best CM in India’ twice in a nationwide poll. During the same period, the then Gujarat CM Modi came in 8th!

When asked about his success with investors, Krishna had said it is his ability to blend conservatism with modernism. Which meant the ability to deal with traditional party politics while being able to woo foreign investors.

It was not just industries that Krishna pushed for, he also had many pro-people projects — He formed the Bangalore Agenda Task Force (BATF) to manage the city; he demarcated areas in North and South Karnataka to move industries so Bengaluru would not get clogged. He gave life to the land records digitalisation project BHOOMI that was lying inactive for 13 years! Today, the Urban Property Ownership Records (UPOR) is an extension of this project. “Sthree Shakthi,” the women’s self-help groups and the game-changing mid-day meal scheme, which is now a national one, were born during his time.

But S.M. Krishna had another quality that not many, if any CM had, which is his approachability. Most industrialists were not intimidated to approach him or offer up advice. Infosys Chairman N.R. Narayana Murthy praised him for his “accessibility and openness to implement new ideas.” Ashok Soota, CII’s then President-designate, called him the “feelgood”  Chief Minister.

Had S.M. Krishna got another term or even if the successive CMs had followed his road map, Karnataka would be in better shape today. But alas.

In a democracy, the prosperity of its people lies in the hands of its representatives. Yes, bureaucrats will formalise a plan and  handle the process of creating wealth and managing the State but it is the decision-maker, the Minister, who has to show the intent.

For example, while analysts say Modi is a Hindu fundamentalist, no one talks about how when it was brought to his notice that 310 religious structures in Gandhinagar (Gujarat) had encroached on Government roads, hindering road widening, he demolished them!

First, he demolished temples. This he did in spite of VHP, his party BJP’s strong arm, taking offence. VHP formed a Mandir Bachao Samiti and screamed “development cannot be achieved by demolishing temples.” It did not stop Modi. Temples were demolished, roads were widened, people benefited, industries came and jobs were created.

If we have to prosper, we need politicians who are pro-development,  pro-people, pro-active and pro-fessional — Politicians, who know when to be political and when to behave like a professional. We don’t have such leaders anymore.

For now, all we have in Karnataka are leaders who have forgotten about creating jobs. They have forgotten that they have to lure industries. Instead they are only busy luring MLAs. Our Loss, their Gain.